‘Cultural change’ comes to APN — print and online to merge

Workers at APN News & Media are being briefed this week on major structural changes to which will see the print and online division merge under a new banner -- Australian Regional Media.

“Cultural change” is coming to APN, with the regional newspaper publisher to become the first old media empire to merge its print and online divisions.

In a memo sent to staff last week, and leaked to Crikey, the company says a review of business structures found the need to bring the online and publishing businesses together to become “the leading multimedia company in each of its local markets”. The merger will take effect from July 1.

Jobs are likely to be lost, though staff have been told the merger will “not involve significant retrenchments”.

“Across our print and online publications we already provide unique, local content through multiple channels. We are in a strong position, but need to continue to innovate and lead in order to grow our regional markets,” the memo says.

“It is not just a merger, but the start of a major cultural change.” 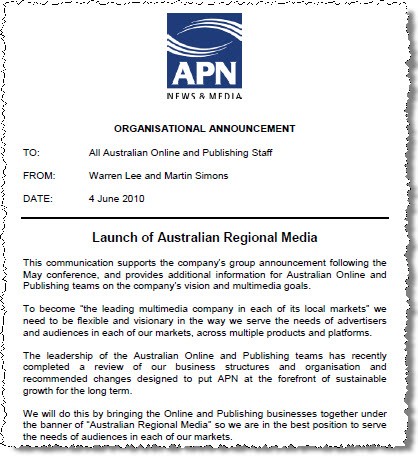 A news editor will be appointed under Rodgers to work across the group, while digital director Hugh Martin will lead development of local masthead websites. Rod Harris takes on a new role as GM of Communities, to “implement a group wide growth strategy for our community publications”.

“Our objective is to refocus the way that we co-operate together to achieve better outcomes for our customers, and continue to ensure that APN is a great place to work,” the memo said.

“This is an exciting and challenging time for all media companies. APN’s unique and valuable assets, and its dedicated and highly skilled people, present a great opportunity for us all to be a part of creating a thoroughly modern media business.”

APN holds flagship publications across the Tasman, including the New Zealand Herald, and 14 daily papers and 75 community publications, primarily in regional Queensland. The company also has significant interests in outdoor advertising and radio broadcasting, with 130 stations across Australia.

Its largest shareholder, the Irish-based O’Reilly family’s Independent News and Media, faced a battle from investment bank BKK Partners to retain control of the business in April. The Australian reported the bank, in a presentation authored by director and former federal treasurer Peter Costello, was lobbying shareholders to vote against the re-election of APN chairman Cameron O’Reilly.