Is a sleep deprived Kevin a risky proposition?

A recent conference paper published in the US found individuals take more risk while sleep deprived. Does this apply to our Prime Minister? Plus, no retreat on RSPT and other political news.

Risk taking by the sleep deprived. Sleep deprivation alters risk taking is what the 24th Annual Meeting of the Associated Professional Sleep Societies being held in San Antonio was told this week.

Men, they found in their tests, were risk avoiding after being well rested (six nights with nine hours in bed), and they became risk seeking after partial sleep deprivation where they were limited to four hours in bed per night.

Kevin Rudd, it seems to me, would know what these American academics are on about. The evidence of his affliction to partial sleep deprivation has been provided by his wife and comments by members of his staff. Three hours in the cot a night is apparently the norm. Then there are occasions like those in Stockholm where, reports David Marr in his just published essay in The Monthly, the Prime Minister had only one hours shut eye in 40. Not that such a long spell without lying down encourages even riskier behaviour. The academics report that risk preference was not affected by total sleep deprivation.

The danger for a person who is intoxicated, or acutely sleep deprived, is that such a person is quite poor at evaluating his or her own readiness to perform say Messrs Tongo OO, Bradley G, Murphy PJ, Campbell SS of the Laboratory of Human Chronobiology, Weill Medical College of Cornell University in another conference paper.

In contrast, when one is extremely sleepy, even if self-ratings of sleepiness are accurate, evaluations of one’s performance deficits do not parallel either sleepiness ratings or actual performance. “It could be argued,” they conclude, “that this last scenario, in which a sleepy person knows he or she is sleepy, but does not believe that this will negatively impact performance, may be the most critical to address.”

I’m sure there is a lesson for Mr Rudd in there somewhere. Perhaps his promise to work even harder now that the polls show him slipping behind means working harder at getting a good night’s sleep.

No retreat possible. One message Kevin Rudd has got is that he cannot afford to retreat on his mining tax proposal. He was quite firm again this morning and the more the mining industry attacks him the less scope there is for even a compromise or two around the edges.

The miners certainly are taking a big risk. Should Labor get back into office after the election – and that is still the most likely prospect — the political landscape will be much different to now with Labor having only to deal with the Greens to get legislation through the Senate. The Greens will surely exact a price for that support and changes to an emissions trading scheme taking away concessions for the coal industry will surely be part of it.

Lunatics take charge of the asylum. Unemployment in the United States rose dramatically during the global financial crisis and has only improved very marginally since the recession was officially declared at an end. 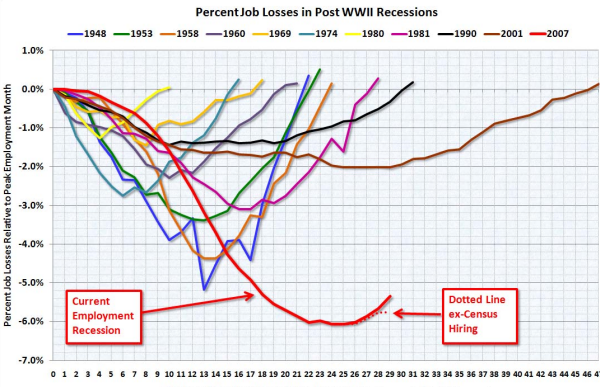 That graph from the excellent Calculated Risk website is far from a picture of a recovery yet now we see that the Congress is cutting back on government spending out of fear that the dreaded markets will panic at the size of the government deficit even though there is no sign of that happening with interest rates still at record lows. Toss in the new austerity program announced overnight in Germany and the UK’s plans to slash spending and the unemployed everywhere in the developed world are surely looking at a troubled time ahead.

Worrying inflation. Get to your panic stations. The price of chocolate is about to go through the roof. Swollen shoot viral disease has struck the cocoa crop in the Ivory Coast which is the world’s biggest exporter. The London Daily Telegraph reports this morning that cocoa futures for July delivery jumped 1.5pc on the Liffe exchange to more than £2,588 this week. At one point it reached £2,606 a tonne, its highest since October 1977. Ten years ago the price was a mere £600 a tonne.

If there’s one thing that characterises Rudd as PM, it’s that he’s extraordinarily risk-averse. I can’t remember such a coward! Which looks like he’s an exception to the study on sleep and risk.

Where are Keynes, Galbraith and Roosevelt when you need them?

Malcolm
I cannot think of anything riskier for a politician than to break a promise so you appear to be a complete hypocrite!
Richard