Will history prove again that Western Australia is a problem for the ALP? Get your wonk on in this, the first in a preview series from Poll Bludger's William Bowe on the upcoming Federal election...

Welcome to the first in a nine-part series examining the lie of the land ahead of the looming federal election, one geographic unit at a time. Grim news for the government being the flavour of the month, I thought I’d start in Labor’s obvious trouble spot of Western Australia…

The State of Excitement (as its licence plates once proclaimed it, to the condescending amusement of visitors) is home to exactly one-tenth of the House of Representatives’ 150 seats, a mere four of which are  presently held by Labor. Remarkably, they managed to go backwards at  the 2007 election in terms of seats, losing two (Cowan and Swan) and gaining one (Hasluck). 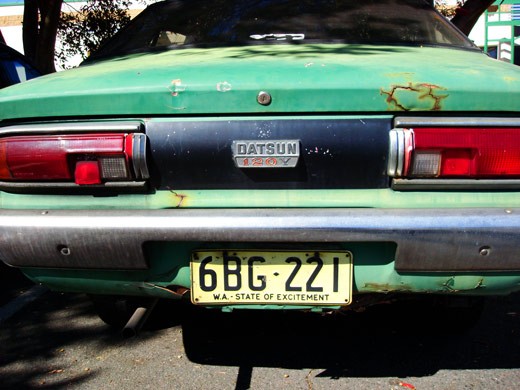 This was despite a 2.1% swing to Labor in two-party vote terms, which was actually slightly higher than in Tasmania (2.0%) and the Australian Capital Territory (1.9%).

However, it came off a low base of 44.6% of the two-party preferred vote in 2004, when the state led the nation in swinging to the  coalition (3.8% against a national result of 1.8%). That result was no doubt fuelled by the loss of local hero Kim Beazley, who had led the  party to defeat at the two previous elections.

In theory, that should have given a resurgent Labor all the more  opportunity to take up extra slack, as it did so spectacularly in  Queensland. In practice, the resources boom took the sting out of the  hostility the Howard government was encountering elsewhere.

Perth’s mortgage payers were probably no more pleased than others that  John Howard had proved unable to fulfill his apparent 2004 election  promise to keep interest rates at record lows — and there was indeed  a strong correlation between electorates’ shares of mortgage payers  and swings to Labor (with one conspicuous exception, to be discussed  shortly).

But while many Sydney mortgage payers had been dealt the double blow  of higher monthly payments and capital loss, housing prices in Perth nearly doubled during the Howard government’s final term.

The other lightning rod for disaffection with Howard, industrial  relations, also took on an unusual flavour in the land of the  resources boom. Australian Workplace Agreements were actively popular among mining workers, who feared a more regimented industrial  relations regime might threaten the astronomical pay packets they had been able to command in a seller’s labour market.

A related aspect of the industrial relations issue involved controversies surrounding local Construction Forestry Mining and Energy Union heavyweights (in every sense of the word) Kevin Reynolds and Joe McDonald, whose starring roles in anti-union coalition advertisements prompted the Labor hierarchy to force them from the party during the course of the campaign.

So it was that the West provided the Liberals with their only two gains of the election — a curious echo of 1972, when Gough Whitlam’s triumph was tempered by the loss of Stirling and Forrest.

One of the two was the northern suburbs seat of Cowan, covering exactly the type of mortgage belt area that provided Labor with happy hunting grounds in other states.

But here the effect was more than cancelled out by the retirement of  sitting Graham Edwards, a veteran state and federal member who had lost both of his legs to a landmine while serving in Vietnam. Edwards had done well to hold back the tide in 2004, and the loss of  his personal vote was enough to deliver a narrow victory to Liberal candidate Luke Simpkins in his second run at the seat.

The other Liberal gain was in the established inner-southern suburbs  electorate of Swan, which essentially produced a status quo result by going down to the wire for the second election in a row. But whereas the electoral gods favoured Labor’s Kim Wilkie by 104 votes in 2004, the decision went 164 votes in favour of the Liberals’  Steve Irons in 2007.

For much of its first term, it seemed Western Australia would provide the Rudd government with abundant opportunities to fatten its majority, thanks to the departure of the locally popular John Howard, ongoing prosperity and perhaps also the defeat of the state Labor government in September 2008, upsetting though that may have been to the party at the time.

A mortgage belt seat such as Cowan looked particularly promising, while the Liberal margin in Swan seemed too thin to defend in any case. A redistribution proved to Labor’s advantage in both cases, cutting the  Liberal margin in the former by 0.5% and turning the latter  into a notional Labor seat.

Liberal front-bencher Michael Keenan’s 1.2% margin of Stirling also looked tough to defend, although the seat’s established middle-suburban status and older demographic profile has generally  made it resistant to big swings.

Most enticingly for Labor was a decision by perhaps the most capable and certainly the most charismatic minister in the Carpenter government, Alannah MacTiernan, to contest the southern urban fringe seat of Canning, where the redistribution had cut Liberal member Don Randall’s margin from 5.6% to 4.3%.

However, as the election year began, it seemed Western Australia’s traditional hostility to federal Labor was beginning to reassert itself. The initially cordial relationship between the Prime Minister and Liberal Premier Colin Barnett began to sour, first over the state’s share of GST payments, which a Commonwealth Grants Commission determination cut from 8.1% to 7.1% with further reductions to follow in future years, and then over the federal government’s health reforms, on which Barnett remains the only hold-out.

Whatever the merits in either case, a perception began to harden that the state was being milked for electoral objectives elsewhere. Even before the resources super profits tax was announced, talk was emerging of “disastrous” Labor internal polling in the most marginal of its four seats, the eastern suburbs electorate of Hasluck, which former LHMWU official Sharryn Jackson had won in 2001, lost in 2004  and recovered in 2007.

Once the planned new tax was unveiled, it was clear that all bets were off: writing off Western Australia was evidently part of the  government’s electoral strategy, and it was now simply a question of  defending the seats it already held. This point was recognised a fortnight ago by The West Australian when it chose the second most  marginal of the four, Brand, as the subject for an opinion poll by Patterson Market Research, having identified that Hasluck was likely to fall in any case.

Brand had provided Kim Beazley with a home after 1996, when he jumped ship from his existing seat of Swan as the tide went out on the  Keating government. Beazley suffered a scare on the first occasion, when Labor spent the week after its crushing defeat contemplating the nightmare of Gareth Evans as leader before Beazley ultimately pulled  through by 387 votes.

In suggesting Labor’s position was comparable to the dog days of the  Keating defeat, Westpoll’s headline figure of 50-50 in Brand powerfully illustrated the extent of its woes. However, the two-party  result did not sit well with primary vote figures that had Labor one point in the clear, a more plausible reading of which would be a lead  to Labor of about 51.5-48.5.

The Liberals’ attack has been extended deeper still into enemy territory, with even the Labor strongholds of Perth (held by foreign minister Stephen Smith on a margin of 8.1%) and Fremantle (where Melissa Parke replaced Carmen Lawrence in 2007, on a margin of 9.1%)  presently being targeted by Liberal leaflet campaigns.

While such moves might achieve tactical benefit in diverting Labor  resources, it seems likely the seats to watch in WA will be Brand and,  if Labor is lucky, Hasluck. However, a new and unfamiliar dimension  has been added to the state landscape by the local resurgence of the Nationals.

The WA Nationals have not held a seat in the House of Representatives since 1974, and last won a seat in the Senate at the 1975 double dissolution. The party has nonetheless remained a constant  presence in state parliament, and achieved a breakthrough success at  the 2008 state election on the back of its campaign to have 25% of mining royalties set aside for regional projects  — which it was able to realise when the indecisive election result  left it holding the balance of power.

Significantly, the Nationals proved the option of first resort for country voters abandoning the ALP, scoring big in mining towns and regional cities where they had not had a presence in the past.

Six months after the election, the ever-entrepreneurial Clive Palmer  announced at the party’s state conference that his financial muscle would be put to the service of the party’s ambitious campaign for a Senate seat.

The Nationals have since been able to fund an extended campaign of advertising on regional television similar in tone to that which  powered their success at the state election, and in doing so have also  boosted their prospects for the lower house.

The most obvious possibility is O’Connor, home to most of the party’s Wheatbelt heartland, where they have loomed as a vague threat to  Wilson Tuckey in the past despite consistently unable to beat Labor to  second place.

The redistribution has done the Nationals a disservice in this regard  by hiving off the northern Wheatbelt to the new seat of Durack, the  balance of which consists of the vast Kimberley and Pilbara areas, and  compensating it with Kalgoorlie (the seat of that name having been  abolished after a career going back to federation).

However, a glass-half-full Nationals observer might well view the  changes as a chance to be competitive in two seats rather than one,  particularly in light of their success in scoring 21.4% of the  vote in the Mining and Pastoral upper house region in 2008, where they  had not even bothered to field candidates in 2005.

If state results were transposed on to the federal boundaries (which  it must be said is an unreliable exercise, given the importance of  incumbent members in state country seats), the primary votes for the Liberal, the Nationals and Labor would have been about equal, giving Liberal member Barry Haase almost as much to think about as Tuckey.