Gold Coast Council HQ abuzz over Crikey story, the king of real estate ads, typos on the front page of The Age and other media news of the day.

Bulletin faces Staerk reality. The Gold Coast Bulletin‘s newsroom was abuzz last week in the wake of Crikey’s story revealing the multiple conflicts of star columnist and registered lobbyist Graham Staerk. Insiders report Bulletin editor Dean Gould, who did not respond to our queries, was involved in an extended telephone chat to discuss the meltdown with senior News Limited personnel, possibly including CEO John Hartigan. Good mates Gould and Staerk then convened their own private session to plot a response.

Meanwhile, over at Gold Coast City Council HQ, twice-elected Mayor and Olympics legend Ron Clarke was busy forwarding around Crikey‘s story to councillors, their PAs and the directors of council departments.

You may find some interest in this.

Who’s King of real estate ads? James Chessell in The Australian today: “Realestate.com.au is the nation’s largest property website with revenue of more than $15 million in the 2009 financial year.” You’d think the media writer for Rupert’s quality Australian flagship would know that 61% News Limited-owned REA Group had 2008-09 revenues of $167 million. The Sun King would hardly be more than $800 million in front on investment that only generated $15 million a year in revenue.

Age surpise! Some seriously surprising spelling on the front page of Saturday’s Age. 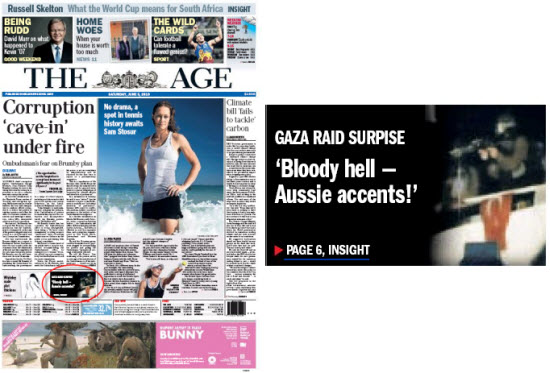 Will Yahoo make a play for HuffPo?

“Yahoo is clearly positioning itself to become a stronger player in the online content game, as evidenced by its recent acquisition of Associated Content. But we are hearing that the real prize they want is the Huffington Post.” — Tech Crunch

“Only 16 per cent of homes and businesses passed by national broadband network fibre-optic would choose to connect to it, even after 15 years.” — The Australian

“The government has launched an online campaign, ‘Under a Rising Sun’, aimed at correcting some of the myths about the military and assisting the recruiting effort.” — mUmBRELLA

WSJ To NYT on slogan accusation: are you serious?

“WSJ has responded to the NYT’s cease and desist order regarding the Dow Jones’ paper’s use of a tagline the NYT says is rightfully theirs.” — Paid Content

Obama’s hidden music video past — or not

“Finally, a Barack Obama conspiracy theory for the rest of us! Everyone from Tea Partiers to hip hop message boards thinks Obama was an extra in the music video for Tag Team’s single Whoomp (There It Is).” — Gawker