NSW Labor mourns as “comrade” has been outed

Not only is the word "comrade" on the outer in China it has taken on the same meaning as "gay" has in Australia!

NSW Labor Party Branch Betrayed! After all they have gone through in the last few years — now this. The greeting that Sussex Street made famous as it made Chinatown its spiritual home is on the outer. NSW Labor will feel betrayed. Not only is the word “comrade” on the outer in China it has taken on the same meaning as “gay” has in Australia!

The China Daily carried the shocking news on page one this morning:

Early this week, reported the paper, the Beijing Public Transport Group was introducing some changes to its rules on how its service people should address passengers. Except for rare cases, such as senior citizens, the term “Comrade” would no longer be used. Instead men and women would be addressed as “Sir” and “Ma’am”, and children would receive the less formal, gender-neutral salutation “Little Friends”. Yet another nail, commented columnist Raymond Zhou, in the coffin of conformism and defunct idealism.

Zhou goes on to explain the latest change in usage of the word:

Then there is the new meaning first used in Hong Kong and Taiwan and now widely accepted among the young in the rest of the country. “Comrade” has been the adopted name for gays and lesbians, first as a euphemism and now the most generic term (but rarely in addressing). This poses a big headache to the Net nannies who have their hearts set on eradicating every trace of homos-xuality from the Web. (They equate homos-xuality with p-rnography.) If every webpage with “tongzhi” is blocked, that essentially wipes out the history of the Communist Party.

Clearly in this new world of capitalist communists nothing is sacred.

Another Minister down. They certainly don’t make it easy for Kristina Kenneally. Every time a little peace and quiet seems to descend on NSW politics her colleagues find another way of disrupting it.

I suppose that’s less disruptive than the resignation a fortnight ago of Transport Minister David Campbell because of stories on the television about him visiting a gay bath house.

A law and order truth. As their election silly season approaches and politicians state and federal start their we-are-tougher-than-them law and order preaching, just keep in mind this little chart from the Australian Bureau of Statistics. 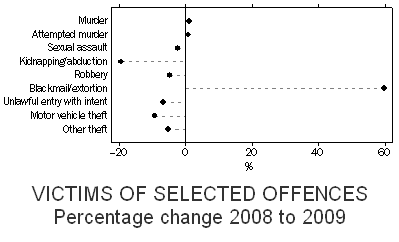 Out goes the plastic bag. The flimsy plastic carry bag is on the way out in California. The State Congress voted this month to only allow most stores to provide bags capable of being reused 100 times or charge at least five cents for a paper bag made with 40% recycled material. California Governor Arnold Schwarzenegger is expected to approve the legislation to apply from the beginning of 2012.

Starting to resurrect an issue. A day when an academic report says most Pacific islands have been getting larger rather than smaller was not ideal timing for trying to get global warming back on the agenda but Kevin Rudd had to do it sometime and a visit from the president of the Maldives provided a better backdrop than most. Unfortunately the media had other things than global warming on its mind yesterday but perhaps the report overnight from NASA confirming that the 12-month running mean global temperature has reached a new record in 2010 will renew some interest in the subject. 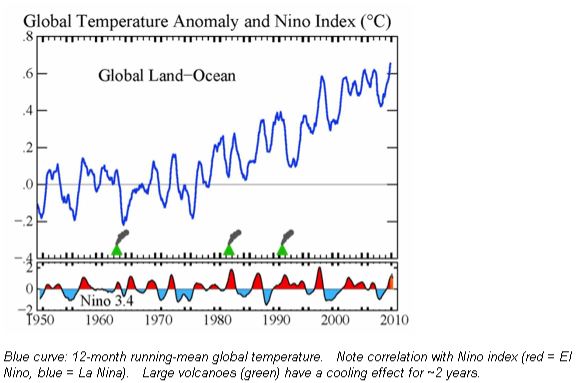 On the crime stats, Richard, it might be worth plotting them as “number of crimes per 100,000 population” or whatever over the past 10 years. With relatively rare crimes like blackmail and extortion, just a few extra could look like a massive increase — which is what I suspect we’re looking at here. Plus they’d also be quite volatile. Are we looking at a 60% increase from 2008 to 2009 which is just a return to “normal” after a drop the previous year?

With global average temperatures rising progressively over a long period and sea levels, which may be somewhat harder to measure with accuracy, rising during at least the past couple of decades, has anybody an explanation for the islands getting bigger?

Are they being attacked by waves and broadened a little? Instrument error? Fact?

Professor Julius Sumner Miller: Why is this so?