Word is spreading that photos allegedly showing weapons seized aboard the Gaza aid convoy ship Mavi Marmari have been faked by Israel, taken years ago. But the conspiracy doesn’t have legs.

Word is spreading that photos allegedly showing weapons seized aboard the Gaza aid convoy ship Mavi Marmari have been faked by Israel, taken years ago. This particular conspiracy theory doesn’t have legs.

The allegation centres on this set of photos posted on Flickr by the Israeli Ministry of Foreign Affairs, and especially this image of bullet-proof vests (below) and a shot showing dozens of knives and a screwdriver. 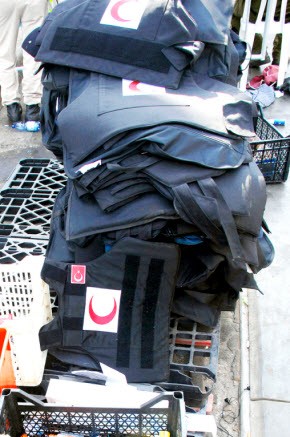 “A stack of bulletproof vests with the Turkish flag and red crescents has ‘EXIF data’ saying the vests were photographed in 2006,” says Palestine Note in a typical report. “A photograph of an ax [sic] and box cutters appears to have been taken in 2003. The theme continues with pepper spray, another purported weapon, being photographed in 2003, an electric saw photographed originally in 2006 and a shot of binoculars and night vision equipment with a slingshot was also taken in 2006.”

Digital cameras use EXIF data to embed information into image files — the date and time the photo was taken, the camera used, technical settings like exposure and shutter speed and more. If the image is edited in Photoshop or another image editor, further data can be added.

Yes, the photo of the bullet-proof vests is indeed timestamped ‘7 February 2006 at 4.49am’, something you can confirm for yourself. But this doesn’t mean the photo was actually taken at that time. That’s just the camera’s clock setting, and they’re notoriously unreliable.

Digital cameras, like most digital devices, have an internal battery that keeps the clock running when the camera is turned off or when the main battery goes flat. Alas, they only last a few years. Once they’re dead, each time you swap your camera batteries the clock resets — typically to January 1 in the year of the camera’s manufacture.

This photo is tagged as taken by a Nikon D2Xs — which can’t have taken any photo on February 7 2006 because Nikon didn’t even announce the camera until June 1, 2006.

Similarly, the photo of knives supposedly taken in 2003 is dated January 1, 2003 and timestamped 14:34:55. That’d be the release year of the Pentax Optio 550 camera with which it was taken, says the Anarchogeek blog, not just after lunchtime but 14-odd hours after the photographer loaded fresh batteries.

“A huge percentage of cameras have incorrect or bad internal batteries and therefore have incorrect date/time stamping. Despite all the New Year’s photos, January First simply is a data outlier in terms of digital photos,” it writes.

If Israeli intelligence agencies can make convincing Australian passports, they can probably do a better job of faking photos.

Who cares whether the photos are real or not? Who on earth would arm themselves with little knives to take on an armed navy? Please!!! A real Jew is one who walks towards the light.

My attention has been drawn to this story at The Arabist which notes that Flickr originally showed the “Taken on” date for the first photo as 7 February 2006 but it was later changed by the Israeli MFA to 31 May 2010. Sorry, but once again this is not evidence of malpractice.

When you first upload a photo to Flickr, it automatically sets the displayed “Taken on” date to whatever date is recorded in the image file’s EXIF data as the capture date. However this can be wrong because the camera’s clock can be incorrectly set or, if you’re scanning old photographic prints from the 1960s, the scanner sets the capture date to the date you did the scan. Assuming the scanner’s clock was set correctly.

Similarly, Flickr allows you to change the location data to something different from that recorded in the image file’s EXIF data. Why? One example would be a smartphone with GPS recording the photo’s location as wherever the phone was when it last got a decent satellite fix, as opposed to where the phone was when the photo was taken.

In all likelihood, all we’re seeing here is the normal workflow for publishing sets of photos on Flickr. Step 1, batch upload the photos. Step 2, fix the broken metadata.

If someone wants to make a case for the photos not being genuine, then they’ll need to come up with some actual evidence that places the photos at a different time or place.

Odd choice of “initial phraseology” – Lateline last night – during the interview between Tony Jones and that “Israeli rep(?)” – something about legitimate retaliation against a “rubber hose” then, quickly, “iron bar”?
Imagine a grown man actually weilding an “iron bar”, that size, with that ferocity? How many broken bones, or even an “Israeli defenders” death?

The raid on the ship was a grievous mistake but it is clearly wrong to claim that those on board did not attacked the rappelling commandos and with the the kinds of weapons the Israeli’s have displayed. The video footage released by the Israeli’s is compelling evidence of that.

If you attack soldiers in that way it is unsurprising that they respond with lethal force – it is almost inevitable.

There’s consistency amongst those later kidnapped that the Marmara was attacked prior to boarding by the Israeli commandos. Folks on other vessels also relate horrific abuse by Israeli brigands – so the grievous assaults weren’t just confined to the Marmara.

Verbal testimony by a British hostage here about half way through

‘BEN KNIGHT: Australian, Ahmad Talib, is believed to have been on the deck of this ship with his wife and sister when he was shot in the leg. His wife, Jerry Campbell, has told their lawyer the shooting began from the air…. See more

IBARI SHAHDA, LAWYER FOR JERRY CAMPBELL: Soldiers came down from the planes, from the airplanes, the helicopters from upstairs and with guns and shooting and they shot her husband.

BEN KNIGHT: So they were shooting, she says, while they were still in the helicopters? So before they hit the deck?

IBARI SHAHDA: Before they came down on the deck.”