No Obama? No worries for Kevin

Not having to play host to the US President will leave the Prime Minister free to concentrate on getting things ready for an early election. Plus, god bless the government stimulus and other political snippets.

Obama staying home a blessing. Kevin Rudd is unlikely to be upset if Barack Obama postpones for a second time a planned trip to Australia as an ABC report suggested this morning. Sure the wonderful photo opportunities will have to be foregone but not having to play host to the US President will leave the Prime Minister free to concentrate on getting things ready for an early election. Apart from all parties pretending to deal with an influx of boat people, foreign affairs will have no role in determining who is running Australia by the end of the year. Hob-nobbing with Obama would bring little benefit to a campaign where leadership will play no significant role.

Stay home he should. President Obama has good electoral reasons of his own not to fly off for a week to Guam, Indonesia and Australia. While there is little or nothing he or any other politician can do to curb the oil flow off Louisiana it is a crisis and people expect their leaders to at least pretend to be in charge of such things. So far the political signals are mixed.

The bad news for the President is that his Democratic Party is losing ground to the Republicans in the polls reflecting the voting intention for the House of Representatives election due in November. 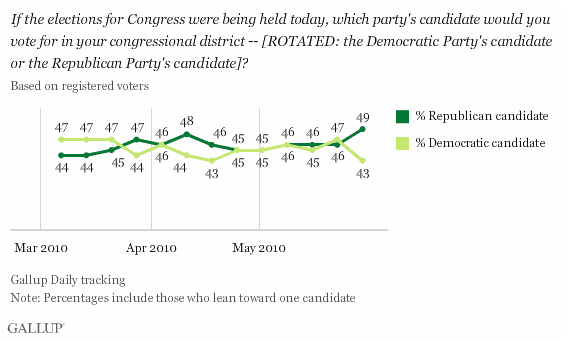 The latest lead shown by Gallup is the largest in the campaign to date. Should this trend continue Republicans will end up regaining control of the House of Representatives again which would further complicate the process of governing.

The slightly better news from Gallup is that the free-fall in Obama’s personal approval rating has come to a halt. 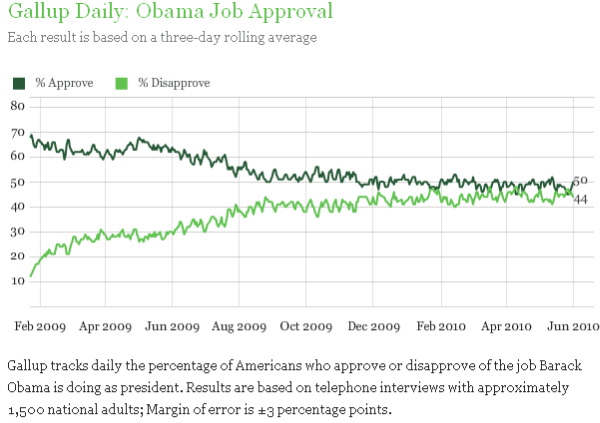 Thankful for some government stimulus. Following on from yesterday’s official GDP numbers showing the importance of government stimulus spending in keeping the economy growing are figures today that have one major part of the private sector still rather sluggish. The The performance of services index prepared by the Commonwealth Bank of Australia and the Australian Industry Group fell 4.8 points to 47.5 from April. A figure below 50 indicates the industry is contracting. 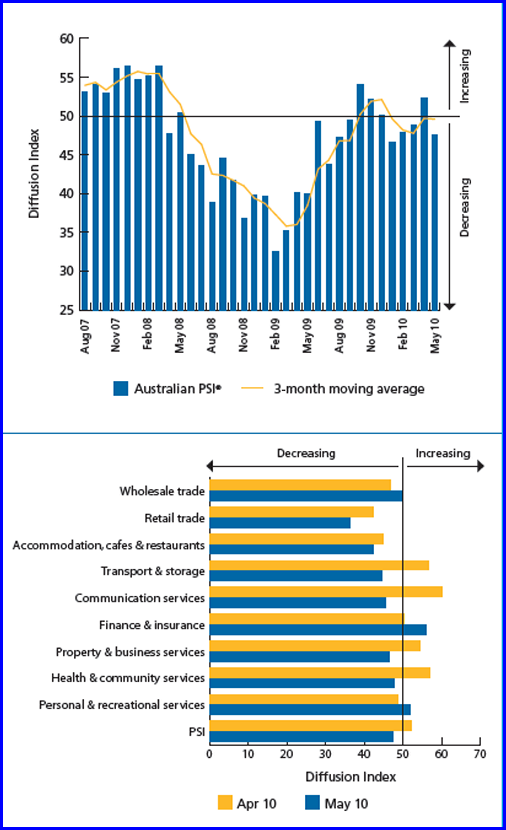 Consecutive increases in official interest rates further suppressed demand for consumer-based services, most notably in the retail trade and accommodation, cafés & restaurants sub-sectors. Conditions also deteriorated in most of the business-related sub-sectors of services. Sales, new orders and employment each fell following solid growth in April, while supplier deliveries maintained its weak trend of the past two years. Services activity rose in only two states: Victoria and Western Australia.

A great racing yarn to give the punters hope. I am grateful to one of my Irish mates for drawing my attention to one of greatest racing yarns for years. The Independent’s racing writer Chris McGrath tells the story of a betting coup the likes of which we rarely see these days. 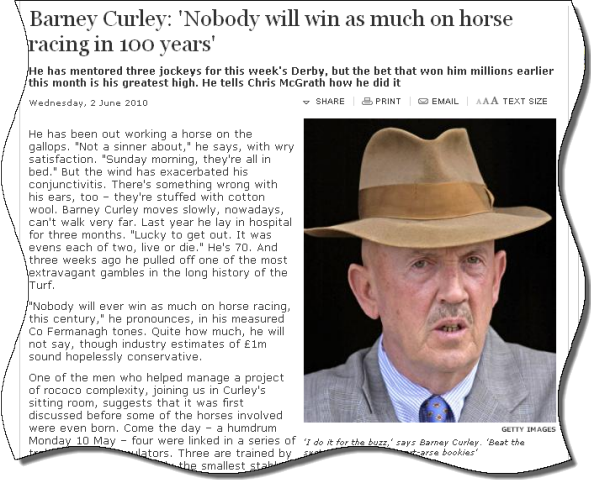 If you are even an occasional betting person, read it in full. It will do your heart good

You’re right Richard. It is a lovely tale of true hearted fellow Vs the bookies.
Even better… would be a link to the full story.

This Barney Curley/Yellow Sam saga would make a fantastic screenplay – I’m surprised it hasn’t already been done. Oh, I forgot, the film industry is too busy doing remakes of remakes such as ‘Psycho’ and ‘A Star Is Born’ et al.

I apologise for not providing the link.
It can be found at http://www.independent.co.uk/news/people/profiles/barney-curley-nobody-will-win-as-much-on-horse-racing-in-100-years-1988728.html

That’s not “Warren Ryan”, under a hat is it?