Tips and rumours: Which bank?

Was just in San Francisco visiting its Museum of Modern Art and came around a corner to see this piece. How did the bank ever get away with such plagiarism?

The saucy tale of the judges and the bondage gear. Your piece yesterday about Madam Lash brings back a very funny memory. In the 1970s I was clerk to the judges of the NSW Court of Appeal in which role I sat in court with their honours. One action that came before the court was an appeal in the matter of Pinniger v Mirror Newspapers, where Gretel was represented by the late Clive Evatt QC. Amongst the many exhibits tendered were bondage pieces and a whip belonging to Madam Lash. These were stored in an enormous old safe in my registry office.

I was working quite late one Friday night when three of my judges were drawn into my office by the smell of the clove cigarette I was smoking — they thought it was wacky tobaccy! They were in excellent humour following a tipple and two of them were sitting on the ongoing appeal. To cut a long story short, they asked me to crack open the safe so they could examine said exhibits.

You should have seen it! Three of the state’s most senior judges (one of whom went on to a much higher office) donning bondage gear and cracking the whip (literally). It was a hoot. They were having so much fun one had to disappear back to his chambers for more Scotch for us all. It was an absolute hoot. All three have now gone to chambers in the sky, so I feel free to tell the story. Just imagine a senior judge trying on crutch-less panties and you’ll get my drift. You’d think he was English!

There’s no other store like David Jones. After Collette called Chadwicks lambasting them for allowing ‘it girl’ Jessica Hart to go to Myer as a new ambassador, the matron of DJs proceeded to chuck a tantie with Seafolly, the swimwear brand that Hart is also the face and body of. DJs has ordered a separate campaign to be shot with another model as the face because they could not possibly have a Myer face inside David Jones. Newsflash DJs — Miranda Kerr was a Myer model for years!

Which bank? Was just in San Francisco visiting its Museum of Modern Art and came around a corner to see this piece. How did the bank ever get away with such plagiarism? 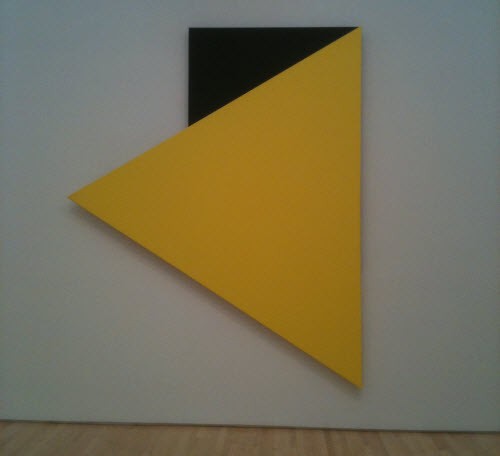