The fix is in: website will pay to rort the ARIA music charts

A mysterious website claims to be able to rig the ARIA music charts by paying people to download tracks from iTunes. But ARIA says any artist caught using the site will be disqualified from charting, writes Crikey intern Alexander Hammond.

A mysterious website is claiming to be able to rig the ARIA music charts by paying people to download tracks from iTunes. But ARIA says any artist caught using the site will be disqualified from the chart.

Chartfixer launched five weeks ago, promising it could get its client’s singles in the ARIA top 20 — “during a quiet period” — for a $14,212 fee. Chartfixer claims the money goes to paying registered users to download singles from iTunes.

“Musicians: Get your song into the official ARIA and iTunes singles chart whether you are signed or not,” it claims on its Facebook page, which is being actively targeted to student groups in Australia.

The site promises its clients a “big increase in album sales” and claims it makes “getting an international record deal easier”.

On an FAQ page, the website says: “ChartFixer is being trialled in Australia before being unleashed upon the world”:

“Why Australia? Firstly, Australia is cool. Also, it is possible to enter the Australian ARIA Singles Chart with a relatively small number of sales so it is easier to test Chartfixer before going for the big markets such as the UK and America.”

ARIA CEO Stephen Peach told Crikey an investigation would be launched into the site’s claims and the options open to block its use.

“ARIA will take all necessary steps to preserve the integrity and accuracy of the ARIA charts,” he said. “Additionally, the sales for any release found to be using the services would be disqualified.”

Crikey joined the site as a member, which offers tracks from the Stone Temple Pilots and The Chemical Brothers for download. For a $1.69 download Chartfixer claims to pay $3.00 — a $1.31 “profit”. Users are also offered an instant $6.50 if they join and buy two specific songs from iTunes. 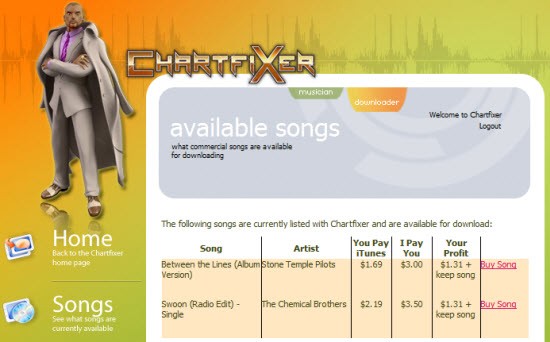 Daniel Younger, a former creative manager at Native Tongue Music Publishing, wasn’t aware of Chartfixer when contacted by Crikey but said similar music sale scams have been running for years.

“I’ve heard of record stores that will — for a small fee — buy copies from the distributor and then sell them back to the band for the same price, so they count towards their ARIA figures,” he told Crikey.

“I guess this is the digital version of that, nothing new, just in a new format and even though they say it isn’t illegal, I highly doubt that.”

On its website, Chartfixer responds to claims the service aims to fix or manipulate the charts: “There’s nothing illegal going on. Think of it as another marketing tool available to musicians.”:

Isn’t this called “Payola”?
No, that’s illegal and to do with record labels paying radio DJ’s to play a single.

Is Chartfixer legal?
Yes. Chartfixer was designed from the outset with the advice of a leading entertainment lawyer based in Australia.

Crikey attempted to contact the people behind the site but received an automated response noting “no humans [are] involved”. It stated:

The entire Chartfixer mechanism is automated so no humans involved. In the future, this means Chartfixer can promote any number of singles and sales in any particular week.

Under normal circumstances I can give you a discount depending on the production quality of your song. The more high-quality songs Chartfixer gets into the charts the better. Chartfixer normally charges $11,369 for 800 sales (Top 30) but for a high-caliber professional sounding song I could do a deal for you of 800 sales at a cost of only $8,700AUD.

The majority of artists currently on the ARIA top 50 have either reached platinum (70,000 units) or gold (35,000 units) in singles sales.

Aussies betrayed: industry groups are all for IT gouging

Something smells funny to me. I bet it’ll turn out to be just a stunt.

Forget about the intrinsic quality of the music. This is what it is really all about. Who/what you know and nothing to do with “music” per se.
This is why it is labelled “the music industry” as opposed to the “music profession”

Remember the payola scandals involving Tony Withers back in the fifties/sixties.