Labor in trouble? Balderdash and bunkum

Labor will end up winning the mining tax battle and with it the election war too. And no inflationary signs yet, the power of a smooth American accent and other political news.

Balderdash and bunkum. They described it on the tele as being a fair dinkum press conference but it looked like one of those doorstops to me. Whatever. It was a more cheerful looking and sounding prime minister the news showed answering the questions, and he did take more than usual of them on a wide range of topics. He even added “balderdash” and “bunkum” to his regular calling of a spade as a spade — a grab the news hounds could not resist.

More importantly Kevin Rudd discovered an excellent third-party endorsement of his mining tax proposal that I am sure we will hear a lot more of:

Let’s call a spade a spade here. You have the opposition and the mining industry saying that the government’s proposed changes to taxes represent a knife to the throat of the industry, what a load of balderdash, what a load of absolute bunkum. I mean let’s just get straight a bit. I mean in terms of your reading, have a look at this bit in yesterday’s Financial Times in London, I commend the editorial to you: “Miners like oilmen” — this is editorial in the Financial Times yesterday — “are a tough lot, they are fighting tooth and nail to derail the Australian government’s plan for a super profits tax, but just as oil and gas companies survive when a similar tax is imposed on them, the mining industry has broad enough shoulders to bear this new burden as well”. And it goes on and it goes and on and on. This is the considered analysis of the Financial Times in London. Can I just say when you therefore have a stream of misinformation from a bunch of mining companies who just don’t want to pay more tax, guess what? It gets pretty willing out there.

The government has not so far handled the public relations part of its mining tax well but being seen as the friend of big miners with South African and American accents is not doing the Liberal Party any good either. Labor will end up winning this battle and with it the election war too, in my judgment.

No inflationary signs yet. The national account figures out from the Australian Bureau of Statistics are as good a scene setter as Labor could hope for on the eve of an election. Not only is Australia again in the leading growth division of the developed world but there are no signs yet of the inflationary pressures that would disrupt the best laid of election plans. 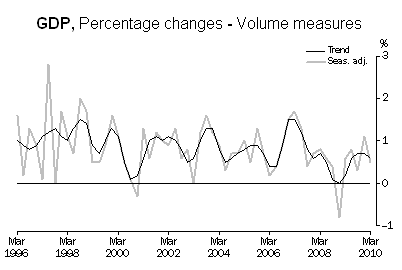 The ABS said the chain price index for household final consumption expenditure (HFCE), the national accounts measure most directly comparable to the CPI, rose 0.9%, the same increase as in the consumer price index (CPI) over the same period. And on the wages front there are no signs yet of demand for labour forcing wages up. 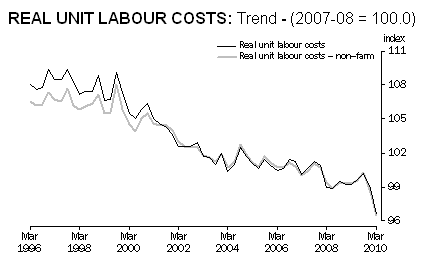 Giving them a north American accent. Back in the 90s during my one excursion into trying to influence international opinion on behalf of a beleaguered people, the smartest thing I did was to realise that in public relations the accent has to be right. Croatians without guns were having a hard time of it trying to break away from the Serbian dominated Yugoslavia and countries like the United States were decidedly unsympathetic to the Croatian secessionist cause. It was hard to get across the truth that the new independence movement was not some extension of the World War Two time Ustashi and the government information service was of no help with the years of communist blinkers having given no understanding of how the media actually worked in a free world. And perhaps more importantly for the American market the halting English did not play well on television even in 15-second grabs.

The solution was to start recruiting first generation American and Australian youths with good and loyal-to-the-cause Croatian parents. We brought them to Zagreb to become the guides for the international television crews and the coverage became almost immediately more sympathetic when it was a kid from Ohio spinning the yarn rather than an old former communist apparatchik. Gradually it was Serbs who rightly became seen as the international villains as the true atrocities of that Yugoslav war were exposed to the world.

I was reminded of this episode last night as I watched the ABC’s Lateline and saw and heard an articulate and very presentable Canadian of Palestinian descent presenting the case from Gaza. 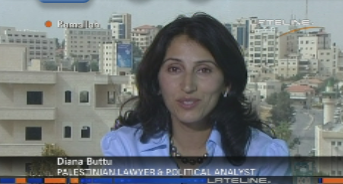 Diana Buttu, described as a Palestinian-Canadian lawyer and a former spokeswoman for the Palestinian Liberation Organisation, presented a case (you can see it here) every bit as smoothly as we have got used to from Israel’s skilled spokesmen. The likes of Ms Buttu will do more for the Palestinian cause than the normal parade of Hamas spokesmen. I know the accent should not matter, but in my experience it certainly does.

I guess the sceptics will find a reason. I know evidence is not important to the global warming doubters, but maybe they will appreciate the pretty pictures anyway that show that Australia has had a pretty hot six months and a hot year as well. 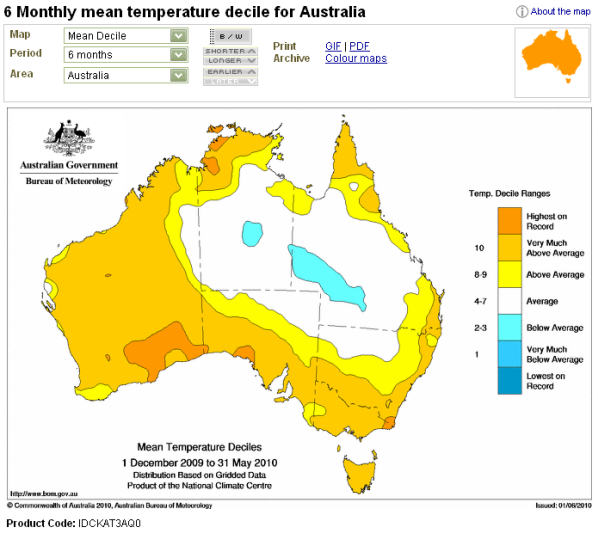 Just those little light blue smudges in central Australia where temperatures have been below average up to May 31. 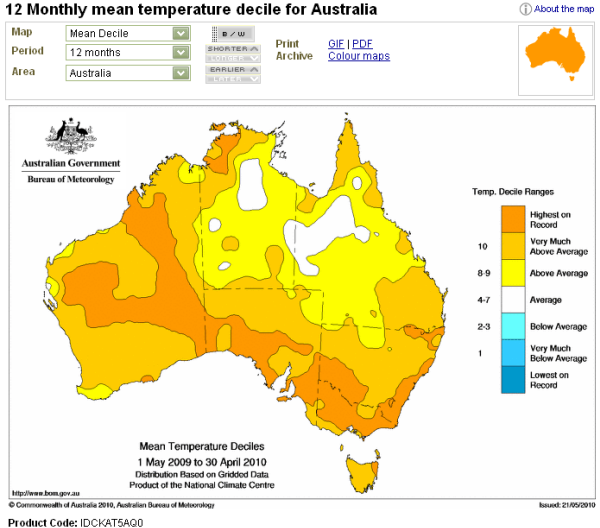 And for the 12 months to April (the data for the year to May has not been mapped yet, but will be similar given the six months pattern above) there’s not a below average area in sight and almost all of the country had temperatures above average.

I am certain you are right about the Palestinian representatives, Richard. They have always sounded so guttural, and the Israelis so smooth. It has to put people off, and recruiting better English speakers will work for them.