The Chaser launched its iPad app last week, and yes it is shocking that we managed to get it through the rigours of Apple approval faster than The Australian, writes The Chaser's Craig Reucassel.

When The Chaser launched our iPad and iPhone app last week, news.com.au seemed shocked that we had managed to get it through the rigours of Apple approval faster than The Australian. So were we.

While we would love to say it involved some trickery or arguing against their generally opaque processes, the reality is that it just took weeks of working through their concerns and resubmitting. Apart from technical issues, and requiring us to restrict the the age of those downloading it to 17+, there were no difficult hurdles to jump.

Which is not to say there aren’t concerns with one company exercising total control over a fast-growing mode of communication. Apple requires a rating of 17+ for “frequent or intense offensive language; frequent or intense cartoon, fantasy or realistic violence; and frequent or intense mature, horror, and suggestive themes; plus sexual content, nudity, alcohol, tobacco, and drugs that may not be suitable for children under the age of 17.” 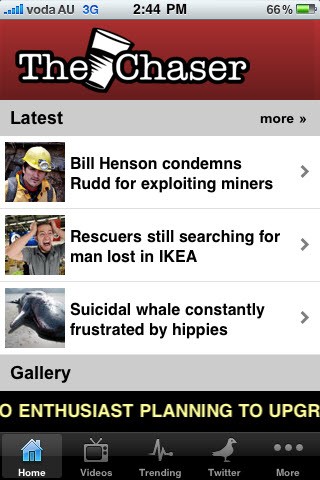 The classification scale boggles the mind, and almost makes us nostalgic for the ABC editorial policies. But the criteria for rejecting an app that contains this kind of content is unclear.

An app submitted by the Pulitzer Prize-winning cartoonist Mark Fiore was initially rejected on the basis that it lampooned public figures. This test would pretty much rule out most of The Chaser’s content, and all political satire.

So far, though, The Chaser has nothing to complain about. There has been no censoring of tasteless jokes, tired satire or labored puns. But our desire to move into iPorn has been hampered. We think that may be for the best.

All I saw initially was Hand Jobs – then I was disappointed.

@ABARKER
You were wondering which tertiary course would give credits in an RPL setting?

I am with @ABARKER, I think the sub editor had the best line…

I’m in full agreement with @ABARKER as well.
Extra points and a koala stamp to Mick the subby.