Garrett and Brown the big movers

The thought seems to be dawning on more than one or two commentators that the 25 years of generally highly competent political leadership in Australia from 1983 to 2007 may have been an anomaly.

The thought seems to be dawning on more than one or two commentators that the 25 years of generally highly competent political leadership in Australia from 1983 to 2007 may have been an anomaly, and looking at the current state of the rest of the developed world seems to confirm we may now be moving closer to the global rule rather than the exception.

Peter Garrett and Bob Brown the main movers thanks to the decision to take Japan to the International Court of Justice over whaling, with Brown also more than happy to respond to the huge increase in the Greens vote in the latest polling. Julie Bishop also leaps into the top ten as only she can. A brilliant double blind to confuse foreign intelligence agencies, no doubt.

Malcolm Turnbull also stepping up the media presence, he clearly feels he’s back in the game, whatever his colleagues may think, and indeed received more coverage than the Shadow Treasurer this week. Plenty of leadership talk in the media about Labor, after this poll will it resurface on the Liberal side? 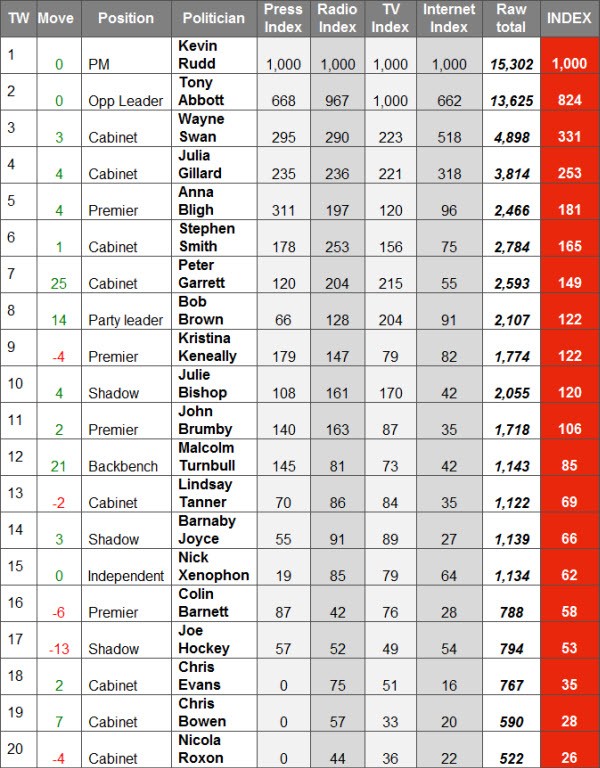 Less interest in federal politics this week on talkback, but still the RSPT and Kevin Rudd well ahead.

The last 48 hours have been all Israel, GWS certainly weren’t thinking of us poor media monitors with that timing…

How Pell, Folau and their supporters seized ‘victimhood’ from the left