The split between minor parties have consistently shown the non-major-parties vote around the 20 per cent mark. Plus, campaigning for second preferences, another boost for the Greens and other political news.

A consistent polling pattern. The split between Greens, Family First, Independents and other minor parties might have jumped around a bit but the opinion polls this year have consistently shown the non-major-parties vote around the 20 per cent mark. This morning Newspoll put the Greens at a record high for them of 16% with the others at 8% to make the total for the non-major-parties 24%. That is equal to the highest figure in the Newspolls back to November 1985 that I have in my records.

That public opinion recently has turned against both Labor and the Coalition Liberal and National parties is no surprise. The leadership of both has shown itself to be untrustworthy. That voters are looking for an honest alternative is what I for one would hope for. That Greens leader Bob Brown’s party might have some views that people disagree with does not stop them being attracted to his straight forward comments. Consistently saying what you think beats shiftiness every time.

Campaigning for second preferences. The forthcoming federal election is clearly going to be one about the two spurned major parties campaigning for second preferences from the Greens and others. And that is very bad news for those Labor candidates in inner city electorates. Finance Minister Lindsay Tanner’s regular vitriolic attacks on the Greens will have to be curbed as the courting begins as his seat is sacrificed to the greater “good” of retaining office. It has all the ring of 1987 over again.

Another boost for the Aussie Greens. Both Labor and Coalition politicians were reacting cautiously this morning to the Israeli actions overnight in boarding the ships trying to bust the blockade of Gaza. Neither of out two major parties wants to appear over eager in any criticism of Israel with Foreign Minister Stephen Smith being especially sensitive given the recent decision to expel an Israeli diplomat for the country’s illegal use of forged Australian passports. On radio this morning he was all “wait and see” with the waiting probably having a lot to do with what Sydney Morning Herald journalist Paul McGeough says in his first-hand account of the incident.

Not reluctant to join the international chorus of criticism of Israel was Australian Greens leader Bob Brown. To him the raids were simply “shocking”. Senator Brown’s forthright stand is sure to tap into the views of many of the political left who already seem to be deserting Labor in considerable numbers.

A pox on both your parties. No, not the Newspoll verdict on Liberal and Labor. The two biggest parties seeing their vote slump in the recent Czech parliamentary election. The center-left Social Democrats (CSSD) again got the biggest vote but it was down from 32.3 percent in the last elections in 2006 to just 22.1 percent. The center-right Civic Democrats (ODS), despite its vote slipping from 35.4 percent to just 20.2 percent, is again likely to form a coalition government with the help of two recently formed parties.

One of them is TOP09, led by the aristocratic former foreign minister Karel von Schwarzenberg, which got 16.7 percent of the vote with its advocacy of strict fiscal discipline. That favourite cause of politicians everywhere – law and order – was the main election campaign theme of Public Affairs, which scored 10.9 percent of votes.

The housing slow down. Without the current boost in Government spending on housing things would be looking more than a little crook for employment prospects in the housing construction industry. Australian Bureau of Statistics figures out this morning show that the private sector house approvals are well and truly on the slide. 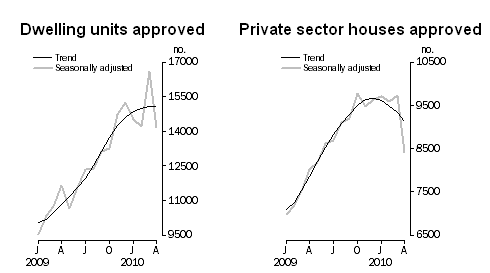 Richard,
In your reference to the historical example of a Labor preference strategy, you’re probably thinking of 1990 more than 1987, when Labor made a blatant pitch for Democrat preferences. Iirc this was successful (in an election where Labor’s 1st preferences fell significantly), and undoubtedly saved the Hawke Government’s bacon.
(The counter-intuitive argument was that the 1990 campaign was defeatist and contributed to this decline in Labor 1st prefs.)

Peter
This old fellow’s memory is not what it was but I know Richo was still Environment Minister at the time and in 1990 I think he was at Social Security but I could be wrong again! I do remember that Singo produced a glossy brochure on environmental matters that went out in the Women’s Weekly and I had to raise the money for a pile of ads by the Wilderness Society – something that ended up causing me more than a little embarrassment a few years later.