The Fin and the ASX … Town Hall number crunching …

Sometimes its hard for a newspaper to tell the difference between hundreds of protesters and hundreds of attendees. Plus, the AFL still doesn't get it, the twits at Nine News and other media tidbits.

The Fin and the ASX. What impact has the RSPT had on mining stocks? Well, the S&P/ASX 200 index fell 7.8% in May. But the S&P/ASX 200 Resources index fell … 6%. Mining stocks outperformed the market by nearly two percentage points. But oddly, that’s not quite how the Financial Review reported it. Its front-page yarn on how dire May was for equities, says: “The S&P/ASX 200 Index fell 7.8% as mining shares were dumped after the government unveiled a 40% resource tax …” You have to go to the rest of the yarn on page 24 to discover miners performed better than everyone else, particularly the big banks, and in fact “the Australian share market tracked falls across global markets”. — Bernard Keane

Hundreds or dozens? “Hundreds of Jewish protesters and their supporters gathered outside the North Perth Town Hall last Saturday in a last-ditch but doomed effort to stop a performance of the play Seven Jewish Children,” David Bell reported on May 22 in Perth newspaper The Voice. 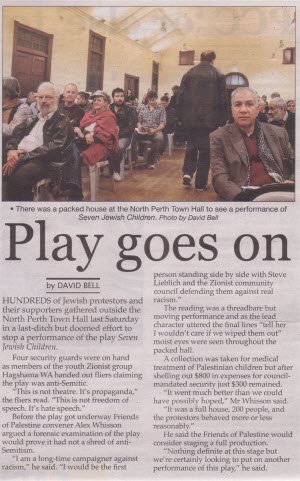 But seven days later, on May 29, the paper revised its estimate: 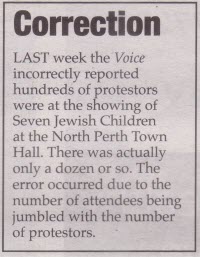 If you look carefully at the original story,  the picture and the story are by Bell, and the picture he took is correctly tagged: “there was a packed house at the North Perth Town Hall to see a performance of Seven Jewish Children”. Quite how Bell managed to get the number of attendees jumbled with the number of protesters — after he attended the play, photographed it and correctly tagged the photograph — is beyond us. — Crikey intern Alexander Hammond

The AFL still doesn’t get it. On Sunday the Swans versus Hawthorn game from the MCG was watched by just 55,000 people in Sydney. On Monday, the league signed NRL star Israel Folau on a $4.2 million contract. On Saturday afternoon, the Geelong-Melbourne game was broadcast into Sydney live and 45,000 watched. None of the primetime games — on Seven on Friday night, or Ten on Saturday night — were broadcast live into Sydney, which is the biggest media market in the country.

Why? Because unlike the AFL, Seven and Ten (and Nine for that matter), understand their audiences and the commercial realities of winter sport in Sydney. Rugby league is the sport of choice, everything else loses money. If the AFL wants Greater Western Sydney games live in primetime in Sydney, it will have to pay for it (and going on Foxtel won’t help either), even if the sport broadcasting rules are challenged to eliminate the rules banning independent sports broadcasts on the FTA digital channels. And if the AFL pays for the new Sydney team, you can be sure the Swans will have their hands out as well. Come to think of it, paying a subsidy to get the Swans into primetime on a Friday or Saturday night would cost less money in the long run than what the AFL will sink into Sydney and the new Gold Coast franchise. — Glenn Dyer

Throw in an extra comma for luck. Seems that Nine News has a slight problem with spelling on the internet. Check out about 50 seconds in, where Nine News heads to the darling of the social media world … 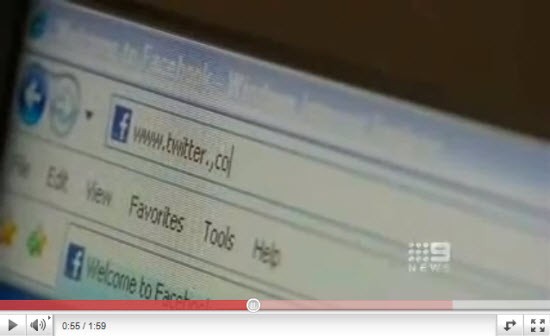 “Before the wakening sky the Herald chief correspondent Paul McGeough and photographer Kate Geraghty, aboard MV Samoud, could see a squad of inflatable military boats on the horizon.” — Sydney Morning Herald

“While people tend to read magazines, those who prefer to point a gun at them might pick up the July issue of Field & Stream.” — New York Times

Not dead yet: newspapers should write pre-obituaries

“I have an idea for a brand new type of newspaper feature. And gosh do newspapers need one.” — The Weekly Standard

Korea will watch the World Cup on their mobiles

“When South Korea plays Greece on June 12 in its World Cup soccer opener in Port Elizabeth, South Africa, life will not necessarily grind to a halt back in Seoul. Many fans will instead follow a live broadcast of the match on their mobile phones.” — New York Times