Shameless cynicism from our leaders is what we've come to expect, no questions or answers with VIC ALP, whaling show business and other political snippets.

Despairing about political talk. I can’t say I’m surprised by Kevin Rudd’s barefaced lying about government advertising. Shameless cynicism from our leaders is what I have come to expect. The repetition over the past few days of television clips showing our Prime Minister solemnly promising when he was opposition leader to wipe out the cancer on democracy caused by party political advertising masquerading as a government information campaign just illustrates in a dramatic way the extent to which politicians treat voters as mugs.

Treat us all as mugs and get away with it, what’s more; not because we condone the lies and deception that journalists sanitise by calling spin. People don’t approve of lying politicians. They just know that almost all of them do it. The weapon of the vote becomes impotent when confronted with a Tony Abbott admitting that we cannot take what he says seriously and a Rudd who prefers to tell us that black is actually white.

I know that Lord Acton had papal infallibility in mind when writing to Bishop Mandell Creighton in 1887 but given the flaunting of their Christianity by our two alternative political leaders that perhaps just makes his words more appropriate:

“I cannot accept your canon that we are to judge Pope and King unlike other men with a favourable presumption that they did no wrong. If there is any presumption, it is the other way, against the holders of power, increasing as the power increases. Historic responsibility has to make up for the want of legal responsibility. Power tends to corrupt, and absolute power corrupts absolutely. Great men are almost always bad men, even when they exercise influence and not authority: still more when you superadd the tendency or certainty of corruption by full authority. There is no worse heresy than the fact that the office sanctifies the holder of it.”

The Victorian alternative. The Labor Party in Victoria has its own way of sparing most of its election candidates from the need to tell lies. The party has simply instructed them not to answer questions at all! 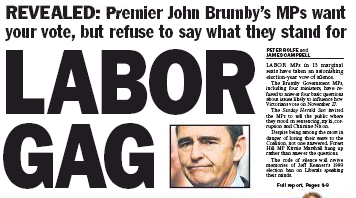 The report in the Sunday Herald Sun confirms that Premier John Brumby will be the misleader-in-chief for the coming election campaign.

Whaling show business. Australia’s legal challenge to Japanese whaling is nothing more than show business. Our government is taking a case to the International Court of Justice knowing that there is little chance of succeeding. The charade is being played out so Labor can pretend to those who actually care about whaling that it is keeping its promise before the last election.

Positioning himself for a return. Malcolm Turnbull’s lengthy interview broadcast on ABC Radio last night suggested that all of the man’s leadership ambitions are not yet dead. While clearly taking care not to directly confront his replacement as Liberal leader, there are still some very apparent differences with Tony Abbott. In the interview, Turnbull gently positions himself to appeal to the remaining small “l” section of the party, which  will attempt to reassert itself should Abbott be unsuccessful at the coming election.

A list for we old-timers. There’s nothing like a good list to brighten up the news day. This one is courtesy of Rolling Stone, which has come out with its best 500 songs ever. And top of the pops? 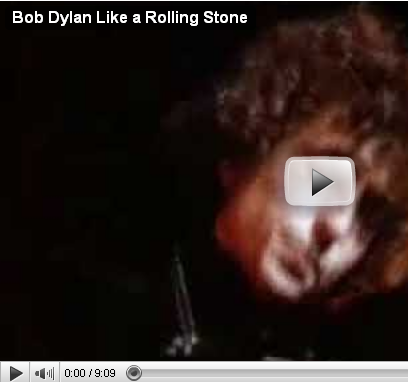 A drip drop flop. A creditable predicting performance from the Crikey Election Indicator at the weekend. The favourite Azerbaijan’s song Drip Drop (rated a 25.4% probability of victory) might only have finished fifth in the Eurovision song contest but the second favourite Germany (rated 22.2%) came home the winner. And for all of you who missed the excitement you will find a complete recording of both semi-finals and the final here.

One slight worry. There is only one doubt I have about the fortune-telling attributes of the Crikey Interest Rate Indicator — Bloomberg tells me that all 22 business economists it surveyed expected the Reserve Bank to leave official rates where they are when it meets tomorrow! 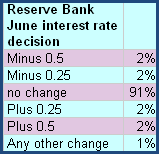 Pobjie: we’ve all been flipper-whipped — the whales can not win

Why will Sea Shepherd welcome back its violent archer?

Spare a thought for the Japanese voice of anti-whaling

Turnbull may well return to win leadership of the part but it will still be a big “L” party – with it’s “caw” beliefs, of where the votes are, the priority of interests of their “constituents”, and “non-core promises”.
As for “this advertised” outrage, considering the “benefits” of this tax, as seems agreed by most of those that understand such things – Rudd and his crew find themselves lined up against the miners, “the miner parties” and the biggest “coal-ition PR”, media monolith in the country, with the way they play “family favorites”, protecting their aggregated flanks and loins – what is Labor supposed to do? Lay down and hand over the keys?

“A list for WE old timers”? US after the (implied) verb…….WE before. Journalism standards are bad enough without the old-timers making things worse.

Peter… are you so sure?

Is an authoritative opinion available? After all, it affects us/we all.

Despite age, some of us move with the times Peter!

‘…the flaunting of their Christianity by our two alternative political leaders ..’ Didn’t you mean ‘flouting’? (JOKE)