As for the current state of the housing market, it appears that the recent rate rises are showing real signs of reversing some of the extraordinary gains of the past 18 months.

Another day, another strange argument from a so-called credible economist. This time, Paul Braddock, the head of property and financial system research at ANZ, who claimed that “we do not believe that a bursting of the [housing] bubble is imminent”. In fairness to Braddock, he was probably just talking up ANZ’s book. ANZ, like the other Big Four banks, have tens of billions of dollars worth of housing assets on their balance sheet — any substantial fall in the price of housing would cast serious doubts over the ongoing profitability of the big banks. (ANZ reported $188 billion in housing loans last year — compared with its equity of about $30 billion).

Braddock conceded that Australia’s “house price to income ratio” (which is a very useful measure of the relative importance consumers place on housing) is almost double historical levels. However, Braddock relied on the “this time it’s different” argument to explain why Australians now spend twice as much (in relative terms) on their principal residence than ever before. According to the Weekend Financial Review, Braddock claimed:

“Ultimately, housing affordability comes down to debt servicing costs, of which interest rates are key driver …

It appears that Braddock acknowledged Australians are over-paying for property, but the overpayment is justified because interest rates are relatively low. Apparently in Braddock’s utopian society, interest rates will never again rise, justifying the record house prices (and anyone who suggests that interest rates won’t remain low for eternity, is apparently “myopic”).

The contrary argument could be made that interest rates globally have been kept artificially low by central banks and that eventually, a reckoning will arrive in which the price of money (expressed as interest rates) will return to more “normal levels” — by historical standards anyway.

Below is a graph produced by Chris Joye and RP Data-Rismark, which shows just how low interest rates have been (relatively) in recent years: 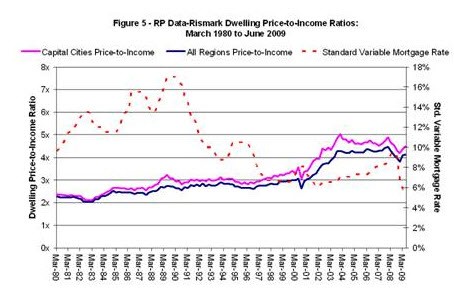 The problem is, if (and when) rates return the levels seen in the 1980s (or even in 2007), history suggests that house-price-to-income ratios will fall by almost half. Unless incomes rise substantially, that would mean house prices would fall substantially.

As for the current state of the housing market, it appears that the recent rate rises are showing real signs of reversing some of the extraordinary gains of the past 18 months. According to data from Australian Property Monitors, only $93.3 million worth of property sold in Melbourne last weekend, down from $293.3 million the prior week, while clearance rates have dropped to an alleged 73% (after sitting above 80% for most of the past year).

Further, the clearance rate figure was calculated by the Real Estate Institute of Victoria, not exactly known for its accuracy. When the “unreported results” are included, Melbourne’s clearance rate slumps to about 66%. Meanwhile, Brisbane’s auction clearance rate has fallen to only 20%.

Bubble, or no bubble: that is the question

Rentals do have a say in residential property prices

However, on a more serious note, a 66% clearance rate in Melb and 20% in Brisbane definitely sounds a little worrying.

I’m none the wiser, but thanks anyway for the graphic.