Julie Bishop’s right — the government has form on fudging passports

A leading refugee advocate says Julie Bishop is correct about Australian authorities's use of fake passports: refugees without passports or official documents are regularly issued with substitute passports.

A leading refugee advocate has agreed with Julie Bishop’s controversial claims that Australian authorities have a tendency to fudge travel documents in the service of national security.

Marion Le, who is currently embroiled in a stoush with the Department of Immigration and Citizenship over the fate of a group of stranded Albanian asylum seekers, told Crikey that “refugees without passports are regularly issued with questionable ‘travel documents’, to force them to leave Australia. Others are told to obtain false passports or invent their nationalities to enable their deportation.”

The immigration department confirmed the existence of the documents this morning: “…an emergency travel document is a one-way travel document issued by governments around the world to facilitate the travel and re-entry of their nationals.”

Le believes that Bishop was simply recalling the tactics of the former Howard Government when she told a Fairfax journalist this week that agencies regularly doctored passports in the wake of the Israeli passport scandal that led to the expulsion of a Mossad agent from Canberra. Bishop later denying the inference under pressure from the government.

In 2001, Le wrote to then immigration minister Philip Ruddock complaining about the emergency documents, after a group of stateless Kuwaitis, or “Bidoons”, were forced to decamp to the Middle East on “Certificates of Identity” prepared for them by Australian authorities. When they returned to the region, they were either jailed or went missing.

“These were stateless people — only one of the Bidoons stayed, and they all returned to Kuwait on these documents, believing them to be passports. They were quickly incarcerated,” Le told Crikey.

This Lateline story from 2003 went further, accusing the government of using the “…same tactics as people smugglers to rid the country of failed asylum seekers”, and uncovering a scandal in which Australian Correctional Management, the US-owned firm that ran the notorious Woomera detention centre, convinced an Iraqi man to acquire a fake Syrian passport.

The program revealed that in the early 2000s, false passports were knowingly used to send detainees overseas, with airline tickets purchased by officials to shield refugees’ identities from other countries’ passport controls.

Activists from the Edmund Rice Centre later tracked down the Bidoon refugees in Syria. The head of the centre, Phil Glendenning, told the Sydney Morning Herald:

“We were not looking for what we have found…It is clear that some methods that have been used to move people from Australia sit outside normal practice and ethical standards.

“In fact, some of these methods indicate evidence of corruption within the deportation process.”

Other activists cite the infamous case of the Bhaktiari family, who were issued with Pakistani passports under pressure from the immigration department led by Amanda Vanstone. The Bhaktiaris, and their advocates, had repeatedly claimed that the family was actually from Afghanistan, where they now reside. 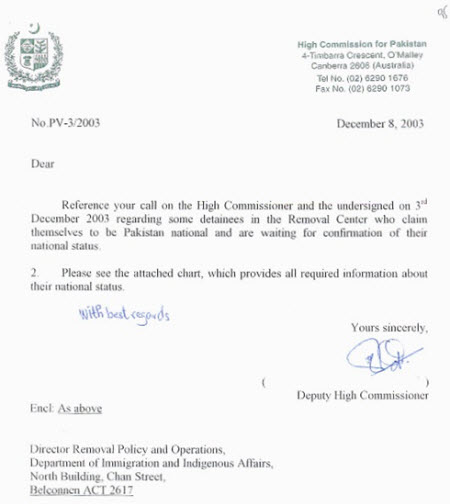 The department letter regarding Bhaktiari passports

The legality of temporary documents could soon be tested again, with the Department of Immigration, according to Le, preparing to issue a group of departing Albanian asylum seekers (around 15 ethnic Albanians, including two families with young children) with “similar documents to the Bidoons”.

According to recently emailed advice sent by the Department, and obtained by Crikey, the Albanian government is planning to send the group temporary travel documents, but had so far failed to do so. If they don’t materialise, Australian authorities could be forced to step in with their own emergency paperwork to ensure the Albanians can legally board a Europe-bound plane.

But Le said Albanian authorities were likely to reject the Australian documents, which are only valid to leave Australia and do not officially allow entry into Albania.

The spokesperson said, “for the record there have been no removals of Albanians back to Albania in 2009-10.” Le responded by saying she was referring to cases currently before the Department.

this article, which i do n0t doubt is true, is completly different from what julie bishop was on about in her interview with tim lester

what the government did was to expel a diplomat in retaliation for israel stealing the identities of australian passport holders and give them to israeli agents, who then used them to murder a person in dubai

im an not an apologist for the labor party, but these issues are different as chalk and cheese

julie bishop showed her incompetance by trying to politicise a government decision, which in my opinion is entirely correct

in fact the australian government did not go far enough, it should have expelled more israeli dipolmats and taken other retalatory measures against a country that regards itself as a law unto itself

@ cairns50 – You have taken the words out of my mouth, exactly the point I was about to make.

It is an interesting turn out: Julie Bishop and her boss, Tony Abbot, do seem to support Mr. Ruddock’s policies against the refugees and they would be happy to continue ‘the culture’ of Immigration Department once returned to the office..
Does that mean that she and her boss, Tony Abbot actually do approve of ‘this culture’ and the forged document practices? Is that what Tony calls ‘negotiations’ with other governments?
I was of the view that there must have been some reasons for the Liberals to have lost the election.
But with the brains like Julie and Tony … Liberals have a long way to go before they can ever get re-elected..
In a very euphemistic style I would call the whole unfortunate incident ‘letting off in public’…again.

Agree entirely with cairns50 – using Bishop’s stupid gaffe as an excuse to bang on about refugees is utterly counter-productive, the issues are totally unrelated and all but the most misty-eyed can see that.

@Edwin Coleman – The point is, it’s hypocritical for the government to expel Israeli diplomats for falsifying passports if we falsify passports as well, for our own reasons (in this case deporting asylum seekers).