Eurovision has become SBS' biggest event, with 420,000 viewers tuning in for this micro-political cheese-fest. "Have a crack at the Eurovision drinking game!" says Nicole Eckersley. 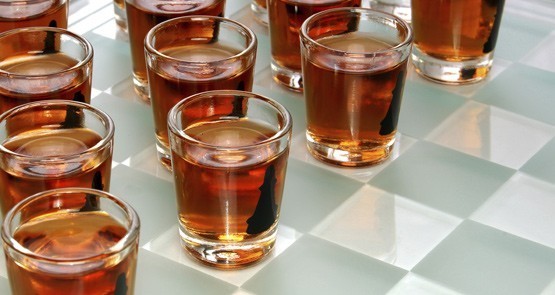 Eurovision has become SBS’s biggest event, with 420,000 viewers tuning in for this micro-political cheese-fest.  Somehow, every year, these apparently otherwise sensible countries lose all sense of perspective and submit, for the world’s approval, multi-coloured tele-tubbies, glitter-encrusted glamazons and arm-waving stilt-dancers.

As the competition expanded to include tiny fragmented Eastern European countries with full voting rights, Eurovision fell to voting blocs. Now, only a handful of carefully placed countries can ever round up enough votes to win. But who cares? Bring on the wind machines and have a crack at the Eurovision drinking game.

Given the likelihood that you will be drinking quite a lot, according to these rules, we would recommend a low-alcohol beverage.  Passion Pop mixed with lemonade to taste is ideal. You may also want to consider a perversion of the national drink of your favourite team. How you interpret “sip”, “gulp” and “skol” are, of course, up to you.

If the United Kingdom still has nil points at the end of the show, finish your drink.

The Eurovision Song Contest Final airs on SBS at 7.30pm on Sunday May 24, with semi-finals at 7.30 on Friday and Saturday.

SBS’s biggest event???
I think that title might go to the world cup Nicole.
But never mind.
Any suggestions for a drinking game to help the punters to survive the shlock is always worthy of support. 🙂

However, I think I’ll reserve the grange for
(1) Wardrobe malfunction and finish the bottle if (2) France sings in English.

BTW. Eurovision is obviously the reason they invented twitter. So what is the hashtag?

Did you know there is a Eurovision for children? It’s called the Junior Eurovision Song Contest or JESC for short. I fell upon it quite by accident recently and it appears to be all the worst bits of Eurovision teamed up with all the worst bits of Rock Eisteddfod.
The difference being I haven’t seen lots of children running around in skeleton costumes as some sort of dancing allegory to war/global warming/drugs/decay of standards in modern society.