The new BRW Rich List estimates the Pratt fortune at $4.6bn. But we presume there's one particular variable that the magazine didn't factor into their calculations: Madison Ashton, writes Chris Seage.

Today it was announced that Anthony Pratt was knocked from top spot to third on BRW‘s Rich List, with his fortune estimated by the magazine at $4.6 billion. But we presume there’s one particular variable that the magazine didn’t factor into their calculations — Madison Ashton — the woman who claims she had a relationship with the now deceased Richard Pratt and has now lodged a statement of claim in the NSW Supreme Court for a piece of the Pratt fortune.

When news broke that Madison Ashton had lodged a statement of claim in the NSW Supreme Court, former clients of Ashton took to the phones singing like canaries to gossip columnists that she was also a well-known escort. 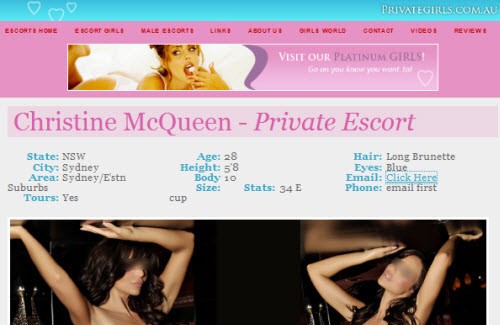 As her profile states:

“A skilled and confident lover, Christine has a healthy appetite for both pleasure. Soft and romantic, or raunchy and dirty, her focus is on being completely immersed in the moment you share with her. Her aim is to achieve your total satisfaction. Experienced in seducing and pleasing individuals, couples and small parties, she is versatile and open-minded. Her aim is to deliver an exceptional, blissful experience you will remember.”

High-class and high-priced, certainly, but also well-reviewed. The website Australian Babes website lists her as “highly recommend” with glowing critiques of her performance. ‘Jimmyjams’ — who flew to Sydney on two separate occasions for a meeting — wrote on March 2:

“She is your girlfriend, your lover & your friend all in one. Some maybe put off by her rates but as a famous fashion icon once said, quality is remembered long after the price tag is forgotten… It is incredibly rare to find this sort of girl and service from a parlour girl and its like trying to compare a Toyota to a Ferrari… Just don’t even try… there there is no comparison…”

‘Barnestormer’ was so overcome after his encounter last year with Christine and her friend ‘Savina’ he quoted a former US president:

“There are times when one marvels at how exquisite life can be. Our world can be filled with turmoil and sorrow, yet there are times when we need to get in touch with the joy it has to offer. The things which make us happy. The things which bring us pleasure. Benjamin Franklin wrote ‘Happiness consists more in the small conveniences of pleasures that occur every day, than in great pieces of good fortune that happen but seldom to a man in the course of his life.’ To that end I have always endeavoured to live the life less ordinary. To have as many of those pieces of great fortune happen significantly more than seldom.”

Crikey has phoned and emailed Christine this morning without response. Her phone message directs callers to her “assistant” ‘Heidi’, who told us she had no comment.

For God’s sake Crikey, lift your game! Hookers and penthouse pets? Seriously? What, are you trying to become New Idea? Pfft!

Strewth, Crikey! I was sincerely hoping you wouldn’t touch this ACA-TT style story and for a couple days you didn’t – what happened!?

Also, Benjamin Franklin was never a US president.

Sheesh. That’s two crap articles in a row from Chris Seage.
This one’s a tabloid stinker and on a day when there’s plenty of serious news.
Lift your game Crikey.

There is another way of looking at these stories and maybe Crikey needs to think about the angle they take in reporting to make them more relevant to the Crikey readership (quite right, we do not subscribe to get ACA or New Idea style gossip).

This one demonstrates how wealthy and powerful men still see women as their playthings who exist to provide ‘personal’ services for money.

HELLO – No bloody wonder there are not more women on high powered corporate boards!

Why would you pay a woman to provide corporate governance advice when you can pay her to strip naked and cater to your every sexual whim? Plus, how can you have ‘team building’ events in strip clubs if there are women in the team?

Then there is the $800 per hour income. I recognise that looking good and being, um, fit takes a lot of time and effort but compare this to a university educated woman working in the community sector for an organisation trying to make the world a better place. She can expect approx $25 an hour. Again, it shows how society/the market (pick one) values women’s various roles.

If ‘Christine’ can make that sort of money expoiting the egos of rich men then I say good on her. Calling her derogatory names while ignoring the systemic way corporate types maintain the gender divide doesn’t do us any favours. Its all in the way you look at it.