Who would have thought? It’s David Campbell’s week

The David Campbell issue was absolutely intriguing in media terms, with the initial titillation giving way quite quickly to widespread anger and condemnation of Channel Seven.

The O’Farrell tactic is coming into play, as both leaders realise they may be the problem and try and disappear from our screens and airwaves, in the hopes that their mob will fall over the line because the other bloke’s so bad. Not a tactic that’s going to work that well in the longer term, one would suspect.

The David Campbell issue was absolutely intriguing in media terms, the initial titillation giving way quite quickly to widespread anger and condemnation of Channel Seven and what was seen as the particularly stark hypocrisies of Adam Walters and Peter Meakin. You’d almost think people realised that the last thing we can afford to do is make politics an even less appealing career for anyone with half a brain than it already is.

Which brings me to the random thought for the week: with excellent support from our brilliant media, are at least one, and possibly both of our major political parties becoming actively anti-intellectual? Is this the inevitable end game of compulsory democracy? Am I just a grumpy old rambler? 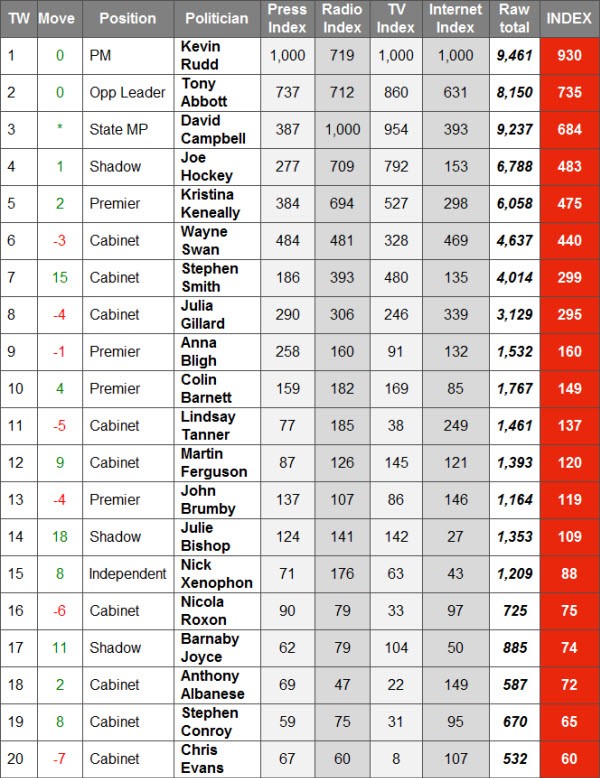 The tribe has spoken, and it’s not David Campbell that has been voted off the island.

Meanwhile, Julia Gillard’s favourite Bulldog would like to clarify, he’s not homophobic, he just doesn’t like being around gay people…