Unemployment down, but Labor’s marginals have suffered

Many of Labor's most crucial marginal seats are also among the hardest hit by unemployment, with 14 electorates having unemployment rates over the national average, new data shows.

Many of the most marginal seats crucial to Labor’s re-election chances are also among the hardest hit by unemployment, new data shows.

Unemployment under Labor has averaged 6.3%, according to Roy Morgan Research released this morning, but 14 of Labor’s most marginal electorates have suffered unemployment rates above the national average.

Labor will be particularly concerned about three crucial seats in Queensland (Leichhardt, Bonner and Flynn), along with the New South Wales bellwether electorate of Eden-Monaro, which have some of the highest rates of unemployment in the country.

But as the research firm notes today: “While this is good news for the Rudd government, it is critical to recognise that unemployment is never uniform across the country.”

The electorate of Grey — which takes in most of non-metropolitan South Australia — has had the nation’s worst unemployment rate between January 2008 and December last year at 16.3%. While the Liberal-held seat is listed as marginal the chances of Labor securing a 4.4% swing now seem remote.

Of the government’s marginals, Flynn (held by Labor on a slim 2.2% margin, where unemployment has averaged 9.7%), Leichhardt (4.1% to Labor with unemployment at 11.2%) and Bonner (4.5% margin, 9.7% unemployment) are all likely to punish Kevin Rudd for the economic downturn.

Eden-Monaro — which has backed the federal election winner since 1972 and is now among the country’s 20 worst-hit jobless areas with 9.2% out of work — is held by Labor on a knife-edged 2.3%.

Along with Grey, another 10 Liberal-held marginals — Boothby and Sturt in SA; Sterling, Forrest and Canning in WA; Ryan and Bowman in Queensland; McMillan and Dunkley in NSW; Paterson in NSW — also record average unemployment rates above the national figure over the two-year period.

Behind Grey, Wide Bay — which covers Gympie and Maryborough and the northern area of the Sunshine Coast in Queensland — recorded the nation’s second-worst unemployment rate over the past two years at 13.8%. The Nationals hold that seat by more than 12%.

The Coalition-held seats of Barker in SA, Calare in NSW and McPherson in Queensland are all in the top five hardest hit electorates in terms of unemployment. 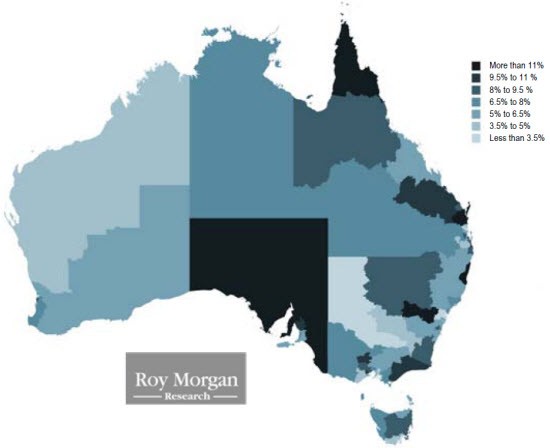 Why Rudd needs to go to the polls ASAP

How Rudd blew it: finding ways to upset everyone at the same time