Julie Bishop probably regrets having suggested that Australian spies forge passports. Plus, the GFC in historical perspective, Rudd yells at newspaper editors and other political tidbits.

Bad electoral p0litics. Julie Bishop probably regrets having suggested that Australian spies forge passports but her real political sin is having tied her Liberal Party to the Israeli cause with her statement that expelling a diplomat was an overreaction. These days there are no middle ground votes to be won supporting Israel. It is not just Australia’s Muslim community that now thinks the Palestinian refugees are getting a rough deal at the hands of an intransigent Jewish state. It is an increasingly common view among all kinds of Australians. And when a political party moves away from the middle ground, as Ms Bishop has on this issue, votes are lost not won.

How goes the financial crisis. With the American markets overnight giving at least some temporary relief from the bad news a look at a graph that puts the latest great financial crisis into an historical perspective. 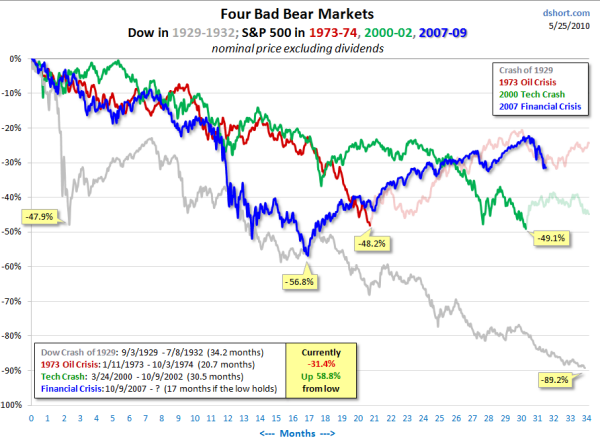 The graph is from Doug Short of dshort.com (financial planner): “Four Bad Bears”.

A mystery story: An uncontrollable Rudd and the newspaper editors. Checking my Google Reader page around 10.30pm last night I came across this intriguing item apparently posted on the news.com.au website at 6.37pm.

Naturally I clicked on the item to see the story but all I found was this:

What can it mean?

The Sydney Morning Herald website provides an answer. It runs an AAP report of a Senate estimates committee report quoting shadow attorney-general George Brandis seeking to find out whether AFP protective security officers guarding the prime minister would as a matter of procedure record any security incidents in their diaries or logbooks.

Senator Brandis suggested the incident occurred in Melbourne on March 30 when Mr Rudd attended a private dinner at Nobu Japanese restaurant at the Crown Casino with a group of News Limited newspaper editors and journalists.

“The nature of the incident involved an altercation in which officers standing outside the private dining room heard the prime minister yelling at such volume that they were concerned that an incident affecting him or potentially his safety was taking place within, and they entered the room to make sure that he was all right,” Senator Brandis asked.

Australian Federal Police (AFP) commissioner Tony Negus told the committee he would take that on notice and consider whether it was appropriate to respond. “I would have grave concerns in divulging the methodology or the activities of how we may or may not respond to particular incidents,” he said.

Strangely the news.com.au site this morning still gives a “page not found” message.

Such sensitivity about the moods of the Prime Minister has not previously been shown by News Limited editors. Perhaps the reason is those at the dinner were embarrassed at the disclosure of the incident that proves that they cannot be trusted to keep what happenings at private meetings private. Either that or the incident did not happen but surely if that was the case the esteemed editors would spring to the PM’s defence and issue a denial.

Is Australian journalism really a victim of the ‘pro-Israel lobby’?

In a similar vein: do you still beat your wife?