In the event a foreign-flagged vessel causes a serious environmental disaster in Queensland, local tourism operators won't have anywhere to turn for compensation

This piece has been updated – see below

In advice provided to Greenpeace in the wake of the Shen Neng debacle, in which the crippled Chinese coal carrier ran aground on the Great Barrier Reef and then was towed into a pristine marine reserve to be unloaded, law firm Maurice Blackburn has explained that tourism operators whose businesses are damaged by an environmental catastrophe in Queensland waters face few options for compensation.

In the event a maritime incident is severe enough to damage or even destroy the businesses of tourism operators in the affected region, businesses could seek compensation from the vessel’s owners, the Commonwealth or the Queensland government.

The Commonwealth’s liability is likely to be negligible, particularly given it has pushed to make pilotage on vessels mandatory in the Great Barrier Reef area, but been stymied by the International Maritime Organisation.

Any effort to obtain compensation from the Queensland government would have to overcome several hurdles, including whether the government or its agencies had in effect acted unreasonably.  More problematically, Queensland’s own Civil Liability Act 2003 establishes a “proportionate liability” regime, which, in effect, means the Queensland government would only be liable for a proportion of the damages involved if another party was also responsible — in this case, the vessel’s owners.

Seeking compensation from the vessel’s owners, then, would be the only real route for affected businesses to go, and for practical reasons it is the most difficult. 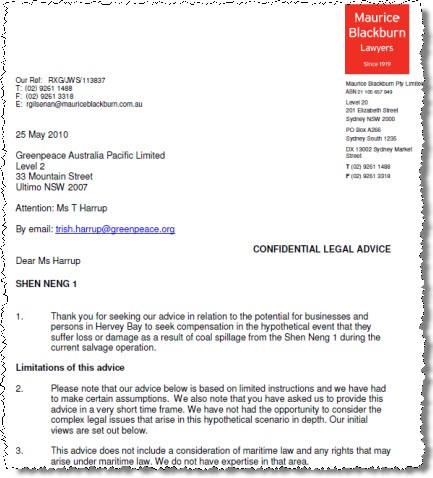 The Shen Neng (which, contrary to media reports, has not left Australia and will still be in Gladstone for the rest of the week) is a Chinese-registered vessel, and the Maurice Blackburn advice notes:

“There is no treaty or reciprocal arrangement in force between Australia and China on the service of processes in civil proceedings. This means that service of any claim would need to be effected through diplomatic channels, which is slow, expensive and uncertain.

“Further, there is no treaty or reciprocal arrangement in place between China and Australia in relation to the recognition or enforcement of judgments in civil proceedings. Our research indicates that in practice enforcement of foreign judgements in China is ineffective.”

Maurice Blackburn principal Rebecca Gilsenan told Crikey that similar problems could crop up for anyone pursuing claims against vessels registered in “flag of convenience” jurisdictions such as Liberia, Panama or Russia, which either were not parties to appropriate treaties or were parties to treaties to which Australia was not a party, making the pursuit of compensation claims very difficult.  The vast majority of trade vessels in Australian waters are registered in flag-of-convenience countries, with less than 1% registered in Australia.

In 2009, the Hong Kong-registered vessel Pacific Adventurer was damaged and lost 42 tonnes of oil and hundreds of tonnes of ammonium nitrate off Moreton Bay, requiring a clean-up costing $32 million.  The vessel’s owners, Swire, a prominent and long-standing shipping company, contributed only $25 million to the clean-up cost, which it insisted was far more than it was legally required to pay.

The chances of a repeat of the Shen Neng and Pacific Adventurer incidents is likely to at least double in coming years, with the Queensland government preparing a doubling of the coal-loading capacity of Queensland ports.  China will be a key destination for much of that coal.

The tourism industry in Queensland contributes 4.5% to the state’s Gross State Product, according to a 2007 study, and employed just under 120,000 Queenslanders.

Crikey sought comment from the federal tourism and resources minister Martin Ferguson yesterday, but his office had not responded by deadline.

I am very confident that my colleagues – Anthony Albanese, the Minister for Infrastructure, Transport, Regional Development and Local Government and Peter Garrett, the Minister for Environment Protection, Heritage and the Arts – are and will continue to take measures to safely manage increased shipping traffic through the Great Barrier Reef.

I fully appreciate the value of the tourism industry to Queensland. Tourism contributes $9.2 billion to Queensland’s GSP and employs 122,000 out of a total tourism workforce of just under 500,000 nationally. The Great Barrier Reef in particular is an internationally recognised natural icon and attraction. That’s why in this year’s Budget, the Rudd Labor Government provided $12 million over two years for the Great Barrier Reef Marine Park Authority to improve the outlook for the Reef, to repair and to upgrade critical infrastructure. I am confident that the management of the Reef as one of Australia’s iconic tourism attractions is well covered from both an environmental and a regulatory perspective.

I understand my colleague the Minister for Infrastructure, Transport, Regional Development and Local Government has acted to protect tourism companies and will continue to do so. In August 2008, Minister Albanese approved legislation which quadrupled the maximum amount of compensation for victims of oil spill damage from $350 million to $1.3 billion. The passage of the Protection of Sea Legislation Amendment Bill 2008 makes good on the our promise to do more to protect this nation’s fragile environmental assets for current and future generations.

Surely this is a job for Business interruption insurance, rather than the Government.

Governments on the whole don’t give a fig about the environment so why should they concern themselves about compensation in the first place.
The mining industry is wholly in there for the money to be made no matter how and let the peasants fight it out in the courts.

The first two comments miss the point, which is that the corporation which puts sh_t on our reef should be obliged to pick up after themselves.

OK, Federal Government, what safeguards do you require to be in place when foreign nationals bring risks into our waters?