Possum: Leaders’ attributes and the vote

As you may remember, Essential Report runs a semi-regular set of questions that measure public perceptions on various attributes of political leaders — from positive attributes such as trust and visionary through to negative attributes such as arrogant and superficial. Over the past two-and-a-half years, the following question has been asked six times about the […]

As you may remember, Essential Report runs a semi-regular set of questions that measure public perceptions on various attributes of political leaders — from positive attributes such as trust and visionary through to negative attributes such as arrogant and superficial. Over the past two-and-a-half years, the following question has been asked six times about the coalition leader and five times about the Prime Minister:

Which of the following describe your opinion of [insert leader]?

They then give the following list of attributes: intelligent, hard-working, a capable leader, demanding, arrogant, out of touch with ordinary people, understands the problems facing Australia, visionary, superficial, good in a crisis, narrow-minded, down to earth, too inflexible, complacent, more honest than most politicians and recently Essential has added trustworthy as an attribute as well.

As a result of the regularity of these polls, we can take a longer look at the issues involved and track how the attributes of the leaders have changed on an approximate yearly basis since there were polls taken in June/July 2008, June 2009 and May this year.

If we run the figures for the PM, the opposition leader and the difference between the two — as well as group each into positive and negative attribute scores, this is what we get: 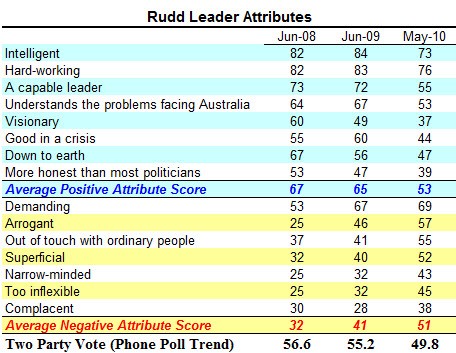 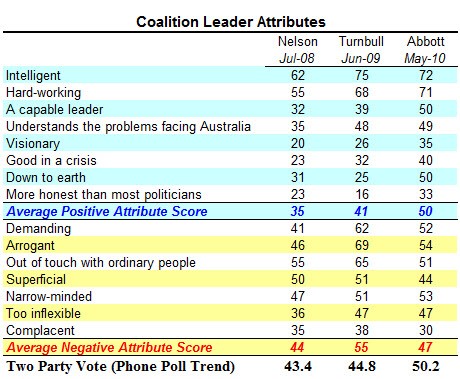 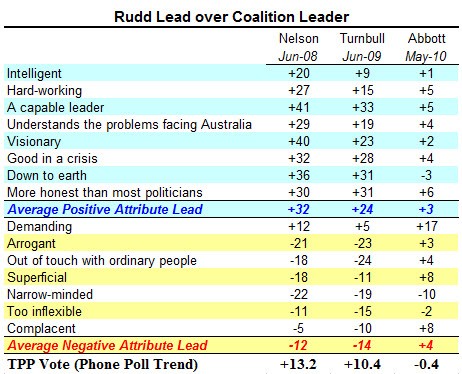 I’ve also added our phone pollster trend value of the two-party preferred to those tables as well, to give us some context in terms of how the vote was playing out at the time those polls were taken. 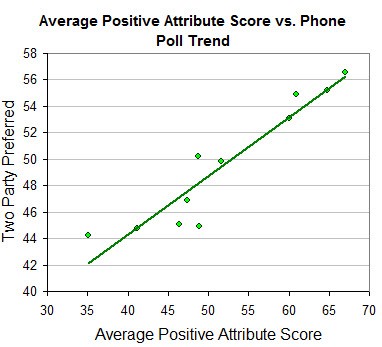 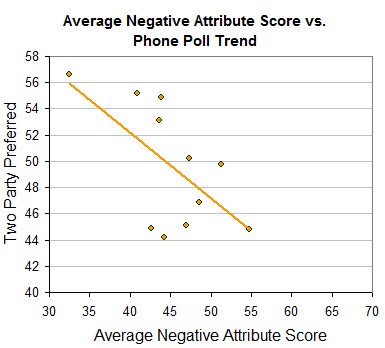 On the positive attributes side of things, as the average positive attribute score increases for government and opposition leaders, so too does the two-party vote in the polling. The relationship is fairly strong and tightly linear and suggests that the more positive is the general vibe of a leader, the better they can expect to perform in terms of the party vote.

With the negative attributes, while there is still a relationship between the vote estimates and negative attributes scores (in the opposite direction), there’s much more variation involved.  However, the dynamics become much more interesting  if we run the same charts again, but this time split the results by party (red for the ALP, blue for the coalition).

Click here to read the rest at Possum’s Pollytics blog