The misreporting of Australia’s residential property market continues unabated, while the body in charge of Australia’s money supply continues to deny the existence of a debt-fuelled housing bubble.

The misreporting of Australia’s residential property market continues unabated, while the body in charge of Australia’s money supply continues to deny the existence of a debt-fuelled housing bubble.

Someone at the Sunday Age must not have been concentrating last weekend when they wrote the headline, “Foreign Property Fear Exaggerated”. The sub-editor may not have read Ruth Williams’ article too closely, which referred to the substantial effect that foreign buyers appear to be having on the Australian housing market:

“To try to find out whether the [foreign ownership laws were] being breached, the [Foreign Investment Review] board did a sweep in March that examined 58 overseas buyers of properties in sought-after [Melbourne] suburbs including South Yarra, Toorak and Brighton. The sweep found that at least half were Australian citizens or permanent residents. Some already had board approval to buy their properties, and several said they had bought new properties as investments, which is allowed under the law.”

While 58 properties is an absurdly small sample size, the figures vastly contradict the headline. If the “sweep” was a truly representative sample, that means that almost half of the properties acquired were done so by temporary residents or foreign companies. This is a truly astonishing figure and provides some explanation for the continued appreciation in residential property prices while mortgage finances has dropped for eight of the past nine months.

While ABS figures recently noted that residential property had rocketed by 20% in the year to March, the head of the Reserve Bank’s Financial Stability Department told a conference last week that “recent data suggest that we do not have a credit-fuelled speculative boom on our hands. It would not be desirable for the current situation to turn into one”.

Dr Luci Ellis’ speech to the AFR’s Residential Property Conference started well enough, showing a graph indicating that in the past decade, residential property prices have, in real terms, risen by 220%. That property has risen at double the rate of other goods and services over 14 years would appear to some to be indicative of a bubble — alas, not to our central bankers. 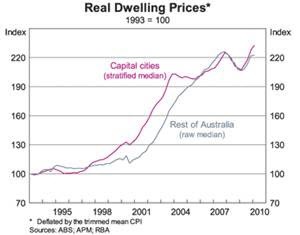 Ellis was also correct in noting that certain demand side factors (low interest rates, low unemployment and the absurd first home owner’s grant), coupled with supply issues (caused by increased population growth and slower dwelling construction) have been partially responsible for the price run up. However, the RBA continues to ignore the elephant sitting in the arm-chair across the room, denying the existence of excess credit as playing a role in recent boom. Ellis claimed:

“Even if household balance sheets were to become overstretched to some extent, historical experience suggests that this, on its own, is unlikely to pose significant risk to Australia’s financial system …

“Compared with other kinds of credit, lending to households to finance the purchase of housing is relatively low risk. International banking regulations recognise this by applying lower risk weights to home mortgages than to small business loans, for example.”

Ellis is correct in a sense — historically, housing lending has been less risky than business lending. However, that is only true until a point — if banks are continuing to lend to fund property purchases that are far removed from intrinsic values, the risk of lending to fund residential property increases substantially.

The RBA stability head then produced a graph that  indicated that mortgage debt in Australia has tripled from 10% of assets to 30% now. Given the substantial appreciation in price in recent years, this would actually understate the impact of leverage on housing prices. 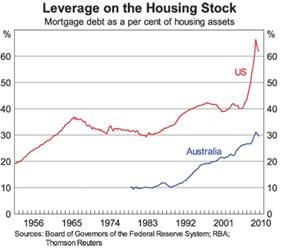 A better illustration of the impact of debt on house prices is the graph below produced by Steve Keen, which shows mortgage debt compared with national income (in the form of GDP). The increase is especially alarming, rising from less than 40% in 2000 to almost 90% today. 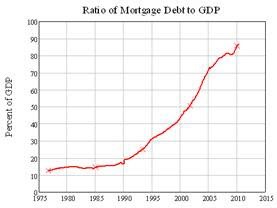 House prices, even adjusting for inflation, have more than doubled in the past 14 years, meanwhile, personal mortgage debt has rocketed. While factors including low interest rates and unemployment have been partially the cause of the massive house price appreciation in recent years, it is somewhat concerning that the institution that determines the cost of credit in Australia is denying the impact of the incredible increase in debt as the major cause of Australia’s property bubble.

I’ll give you another stat, of all the Auctions I attended with or for a mate of mine trying to buy a house 100% were bought by Asians, thats 100%, obviously buying with no concern whatsoever for the price, one was a teenager sitting in the driveway of the house who just out her hand up with no thought at all, just keep bidding.
One new unit near me, about $1.7m a ridiculous price sold to Asians about 12 months ago is still vacant.
Funny how this all happened after Rudd changed the FIRB rules.

The same thing seems to be happening all over Australia particularly in the more expensive market. Now, we don’t want to be accused of racism but as a young couple we lack heavy clout when it comes to buying a house to live in and we keep getting out bid at auctions and beaten to the punch with our offers to buy.

And yes, rightly or wrongly, they are Asians. This fact has been conceded by the agents. I don’t know whether they live here or not and we don’t blame them at all, but we blame the people who have made it so rediculously easy for them to compete with generational local Australians just for a roof over our heads.

We now have no other option but to look for a home far outside the Melbourne CBD which separates us from our family and friends and isolates us from our cultual roots and our places of employment.

If the government does not do something about it soon, there will be such a political backlash that we fear blood in the streets.

Kevin and Julie, well said, this has nothing to do with race it just happens that it’s Asians doing the buying and it’s not their fault it’s the Govt that allowed this by changing the FIRB rules.

I fear if labor gets back in who knows where we’ll be in another 3 years of this incompetance, I also hope that the Libs are up to it, they have to be there’s no one else to turn to.

Kevin and Julie – maybe you should hang on a bit longer somethings got to break soon.
In any case good luck to you.

Good point. We voted labor all our lives and my father was a staunch unionist working all his life on the Melbourne docks, but it’s ironic in this day and age that we have to turn to the Liberals to get some home grown justice.

What does it take to reach this people in the Labor govt that their wickeredness with the FIRB rules is taring down the very fabric of Australian life and the right to a roof over our heads.

I just know Labor will be severely punished at the next election, Australians have had a gut full.