A Herald Sun story has been rolled off, by the Rolling Stones themselves. Plus, more from the world of awkward advertising placements, cost cutting curtails Obama's entourage and other media snippets.

Herald Sun slapped down — by the Rolling Stones. Australian journalists have sent Rolling Stones fans into a frenzy with reports Charlie Watts would quit the band’s world tour — earning a firm slapdown from the ageing rockers who say the talk is baseless. As The Guardian picked up yesterday, gossip-monger Nui Te Koha from Melbourne tabloid the Sunday Herald Sun cited a “respected tour promoter” in reporting on Sunday that the 68-year-old drummer would stay home when the Stones hit the road. That yarn followed on from a report on Aussie music site Undercover in September last year that Watts was ready to quit.

Rubbish, a spokesperson for the band says, calling the reports “fabricated and ill-informed”. “We would like to make it clear that drummer Charlie Watts has not left the Rolling Stones,” they say. Stones fans can rest easy. — Jason Whittaker

All-too-relevant advertising. Earlier this morning The Daily Telegraph reported the death of Paul Gray, the bassist for Iowa-based metal band Slipknot. According to the Tele, Gray was recently found dead in a hotel room and “an autopsy and toxicology testing” will attempt to determine his cause of death later today. While the story all seemed to check out, the Tele might want take a little more care with their advertising banners. Plastered directly above the story of Gray’s death was a matte-black banner, featuring the words “I speak to the dead — we put clairvoyant to test … in graveyard”. — Crikey intern Matt de Neef 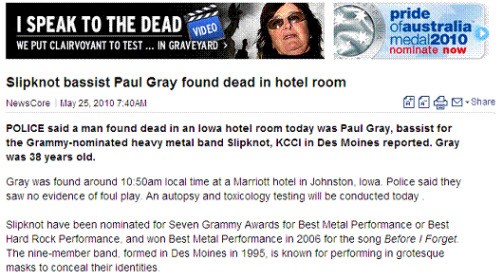 “The news media have found a new area of coverage ripe for cost-cutting: the president of the United States. For decades it was a given that whenever the president traveled, a charter plane packed with members of the press would travel with him. But the press flights have been sharply curtailed in recent months, a victim of cost-cutting by news organizations that are struggling to stay profitable.” — New York Times

“The NoW tale, Fergie ‘sells’ Andy for £500k, was another of its typical sting operations masterminded by Mazher Mahmood (aka the fake sheikh). In essence, it revealed that the Duchess was selling a businessman access to her ex-husband, Prince Andrew, who has an unpaid role as the UK’s special representative for trade and investment.” — The Guardian

“In his first comment since the privacy controversy of recent weeks, Facebook CEO Mark Zuckerberg has admitted that the company “made a bunch of mistakes” and wants to ‘get this stuff right this time’.” — Mashable

“Channel Seven will not screen the 2½-hour finale until 8.30pm Wednesday. A spokeswoman for the station said a Monday afternoon simulcast was considered, but it was felt fans would find the show more easily in its current timeslot — although the finale has been upgraded from digital channel 7TWO to Seven.” — The Age

“Third-party ad networks have been officially banned from Twitter, according to a post on the Twitter blog on Monday from Chief Operating Officer Dick Costolo. It’s a move that could drive some of the advertising start-ups that have built around Twitter out of business.” — CNET

“Everyone who publishes news online would like to be able to get paid for it by readers. But the balance of risk versus reward isn’t the same for every publisher. Some, like The New York Times, have far more to lose by erecting a pay wall — more, perhaps, than they realise.” — Daily Finance

“David Cameron has held secret talks with Sky TV owner Rupert Murdoch at No 10, raising fears the Tories are preparing a war on the BBC. The media baron sneaked in by a back door for a private meeting with the Prime Minister on Tuesday but neither Downing Street nor Mr. Murdoch’s News Corp would say why.” — Mirror

“The death watch began in March 2009. That was when – in the midst of extraordinarily difficult times for newspapers – Time Magazine published its scary-sounding list: The 10 Most Endangered Newspapers in America.” — Wisconsin State Journal

“The short of it is this: BP last week managed to get a tube attached to the rupture, through which oil was a-gush. The oil giant told reporters that they were managing to capture 5,000 barrels a day through that siphon. Of course, if you recall, BP had previously insisted that the total rate of the oil leak was 5,000 barrels a day.” — Huffington Post