The Age kinda, sorta, comes forward about where the missing Age archives are. Plus, Marty Sheargold isn't who he appears to be, the myth of hero journalists and other media news.

Age archives: ask your mother to pass the salt. The editor of The Age, Paul Ramadge, has hit on an odd method of communicating with Crikey. Yesterday we ran this story in which former Age editor Michael Gawenda called on Ramadge and others to come clean on the fate of the company archives, which as we have reported over some weeks have been missing in action.

I have sent a number of emails to The Age, including two direct to Ramadge, seeking comment and information on all this, and received absolutely no response. Soon after yesterday’s Crikey story appeared, Ramadge sent a strangely-worded memo to all editorial staff, which instantly found its way to me:

Some editorial staff have been asking about The Age’s archives. We have kept archives from Spencer Street. They are catalogued and in safe storage.

Now, I have a number of questions about this memo, but since Ramadge is playing no speakies, I will have to ask them through the medium of Crikey. — Margaret Simons (more at Content Makers)

Marty Sheargold’s facial reconstruction. Sky Business News program Media Week reported yesterday that former Triple M presenter Marty Sheargold has moved to Nova FM in Brisbane. The program showed a photo of Sheargold as the Newsweek presenters discussed the move. The only problem was, the man in the photo was most definitely not Marty Sheargold. (In fact, we’re not sure who he is either. Can anyone help us out?) — Crikey intern Matt de Neef 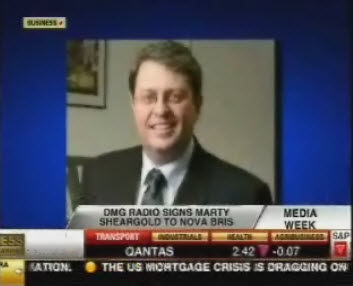 “Google Inc. said Thursday it is working with Sony Corp. and Intel Corp. to bring more of the Internet to televisions with a new product called Google TV. The service will combine existing TV programming with Internet video and make finding programs easier.” — Business Journal

“The Pakistani government lifted a ban on video-sharing website YouTube after the company took down ‘blasphemous’ footage, but retained a temporary ban on social-networking site Facebook imposed earlier this week, the country’s telecommunications regulator said Thursday.” –- All Things Digital

The myth of hero journalists

“Some media-driven myths can be self-flattering, offering up heroes in a profession more accustomed to scorn and criticism than applause. More important, though, is that media-driven myths often emerge from an eagerness to find influence and significance in what journalists do.” — Huffington Post

Lost for the last time

“As the end of Lost approaches — an extravaganza that will stretch from Sunday night into Monday morning on ABC — the natural urge is to join in the final frenzy of speculation. Who will live, who will die, and what did it all mean?” — New York Times

Media under fire in Bangkok backlash

“The media have become a new target in Thailand’s political turmoil. Since their protest was crushed by troops, furious demonstrators have turned their anger on the most visible messengers in their conflict.” — Fairfax

“There’s a new web-a-zine on the Internet called 48 HR Magazine. But CBS is already claiming title infringement because the creators of the new site have chosen the name of CBS News’ long time Saturday night news magazine 48 Hours.” — Huffington Post

“Strangely enough, one of the most ‘social’ experiences you can have on the web right now is to log on to ChatRoulette and meet a random stranger. Well, the creators of popular IM software Digsby have taken that idea, and combined it with Farmville to produce the Chatville social game for Facebook.” — Social Times

“Time Magazine’s May 31 issue will hit newsstands with a cover and feature story dedicated to the ‘scary’ side of Facebook. The cover art pays homage to the Facebook generation with a mosaic of 1,295 Facebook profile photos, accompanied by a blurb from the feature article: ‘Facebook… and how it’s redefining privacy. With nearly 500 million users, Facebook is connecting us in new (and scary) ways.'” — Mashable