‘Save VCA’: indigenous centre in crisis as money dries up

Storied Victorian College of the Arts Indigenous institution the Wilin Centre is in crisis after the centre's founding director and an administrative staff member were told their contracts would not be renewed.

Storied Victorian College of the Arts indigenous institution the Wilin Centre is in crisis after its founding director, Michelle Evans, and an administrative staff member were told their contracts would not be renewed when they expire on July 2.

Both were given a temporary reprieve following desperate talks on Tuesday between the university and representatives from the National Tertiary Education Union — enabling them to remain on the premises for a further eight weeks until August 31.

Crikey understands the centre, which has served as an anchor for indigenous students on the VCA’s Southbank campus for seven years, will almost certainly be binned if extra cash cannot be found to pay the staff members, whose salaries constitute the vast majority of its funding.

A mysterious anonymous donor provided the initial money to establish the centre but that dried up last year, prompting a controversial external review in February. The university is currently in talks with the original donor to extend the bequest, worth about $200,000 a year.

Evans has been with Wilin since its inception in 2002 and the administrator joined the centre two-and-a-half years ago.

The departures come on top of the earlier removal of the centre’s student liaison officer and leave Wilin as effectively an empty shell.

Matthew McGowan from the NTEU condemned the university’s actions and called for it to immediately step in and fill the funding hole: “It seems that the Dean is acting in unilateral and cavalier manner and doesn’t appear to be consulting with the indigenous community prior to making these kinds of decisions.”

Wilin, which means ‘fire’ in the language of the traditional land owners, is a central feature on the VCAM’s Southbank campus and has claimed huge success in keeping indigenous students engaged at the university. Over its lifespan, VCAM has achieved a higher indigenous retention rate than any other tertiary institution in the country.

Its website implores readers to “keep the fire burning”, but it seems those flames are close to being snuffed out.

The external review was run by arts industry entrepreneur Justin Macdonnell, who also serves as the executive director of the Anzarts Institute — a firm co-directed by controversial VCA Dean Sharman Pretty — as revealed by Crikey in February. The review is currently in the hands of Pretty, but it is yet to be formally released.

McGowan, who has seen the review, told Crikey it was “riddled with leaps of logic” and was a “load of junk”.

The demise of the Wilin Centre will increase pressure on the state and federal governments to restore funding to the broader VCA.

Both the Greens and the Liberal Party have released statements this week condemning the state government for refusing to rescue the institution. At a meeting of the Public Accounts and Estimates Committee on Tuesday, Arts Minister Peter Batchelor ruled out more money, calling instead on the federal government to step in.

Greens Upper House MP Sue Pennicuik slammed both levels of government for failing in their obligation to the arts, calling the lack of action “a disgrace”:

“The VCA has become a political football and its unique status in training and developing our performing artists is being lost because neither level of government is prepared to provide the modest level of support needed to support it.

“The premier and the arts minister should stand up for the VCA, as was promised in 2006, by providing core support funding and by seriously lobbying for adequate ongoing funding from the federal arts portfolio, in keeping with federal support that is provided to other performing arts institutes such as NIDA and WAAPA.”

The VCA has remained a hotbed of dissent following the release last week of a discussion paper on its future, prepared by a committee headed by former Telstra chief Ziggy Switkowski.

At the first joint graduation ceremony at the Melbourne Town Hall between VCAM and Melbourne Music on Tuesday, Master in Film and Television graduate and budding director Gregory Erdstein hoisted a ‘Save VCA’ t-shirt to the crowd from the lectern, to rapturous applause.

Erdstein then attempted to hand the shirt to University of Melbourne Chancellor Alex Chernov, resulting in an altercation when Chernov, according to Erdstein, “physically pushed me away”. 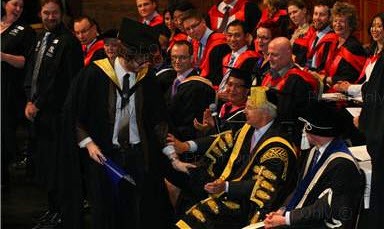 “I wanted to give him something that could help him sleep at night,” Erdstein told Crikey this morning.

The university told Crikey it was “disappointed that this incident may have marred what was otherwise a successful celebration of students from the Faculty of VCA and Music.”