Rundle in Cannes: Come for the films, stay for the parties

After watching several films in Cannes Guy Rundle went to a party in a marquee. It was an all white marquee, most of the folks were in white, the DJing was white, even the black people were white.

Look, I have to admit that sometime in the third hour of A Screaming Man, I drifted off somewhat. The story of an African pool attendant who loses his job: as with every film in the competition, it was beautifully shot, with aching and expert mise en scène, and as slow as a snail pushing a goddamn glacier.

There are a dozen films like this in the competition, all of them important moments in their national cinema’s history. Every morning people queue for them, their passes flapping on their chest, the lines snaking out in the forecourt of the Palais des Festivals, all waiting to get in to see what they’re thinking in Moldova/Kyrgyzstan/Curaçao/Brhtyfgtyrtp these days.

The question is, is anyone actually watching them? I didn’t see Tim Burton or Kate Beckinsale at the goddamn showing of A Screaming Man. OK they’ve allegedly seen it before, but have they? Have they actually sat through this impeccably made film that simply feels to me, as does much developing world cinema, like a re-staging of Rosselini’s post-war neo-realism?

I can quite agree that every national cinema needs to go through this stage. Every cinema viewer, too. Let no-one say they know cinema who has never seen Rome: Open City. It’s just necessary. But, even with a few magical bells and whistles, does it have to be repeated endlessly? The slow accumulation of detail, the idea of cinema as witness to reality, and on and on and on. This ponderous manifesto, which runs through half the movies on offer, has become the house style of festivals selecting from the non-west, call it whatever you like.

What’s always noticeable is that the western films in competition don’t conform to this aesthetic. So from Africa we get some arty piece from Chad, rather than, say, some f-cked up Hollywood guns ‘n’ crime extravaganza. From the US? Doug “Swingers” Liman’s take on the Valerie Plame CIA outing affair at the beginning of the Iraq War. Played for laughs, for style. And that becomes the aesthetic division of labour, produced by the selection committee in the same spirit of worthiness that has my old friend Sienna Miller spruiking for Haiti across the airwaves. It is the third world as worthy guarantor of all that is authentic.

You can see how the rhetoric runs, out loud or otherwise. The west is decadent, and lost to entertainment, a hopeless cause. Only the others can save us, not we ourselves. Even the contrary admissions such as Ken Loach’s Route Irish are thrillers in the classic genre form.

Whatever the thang, I bailed on A Screaming Man close to the third hour. I came out into the main foyer of the Palais, a place which looks like a conference centre in Geelong, had a quick fag on the media balcony (I don’t smoke) and dived into the Marché.

The Marché, as I’ve said, is the real beating heart of Cannes, simply a sales exchange for crap films, bought and sold through mutual need. Bought by distributors who need throughput, overwhelmingly to the cable TV market. Sold and spruiked by production houses and, more importantly, national funding bodies, to keep their whole show on the road.

Added to the festival decades ago, in order to keep it afloat, the Marché is effectively an admission of defeat, a recognition that if all you screened was good films, no one would fucking come. Cannes died when the Marché was born. Particularly so, because Cannes was developed as an alternative to the Venice Film Festival, which had been taken over by Mussolini in the 30s. Ironically, this year’s fest began with Sandro Bondi, Berlusconi’s chief propagandist and a former communist, withdrawing the entire Italian official presence because of a mildly (and in the Italian intellectual style, leaden) satire of Berlusconi called Draquila or summat, an attack on Berlo’s handling of the recent earthquake.

Argghhh to that. There was no point diving into the competition, I had already spent a pleasant half hour watching Space Girls in Beverly Hills. No, not p-rn. If only. Rather, it was one of those films that are entirely psychotic from start to finish, as are the people watching it, most of whom are the cast. The plot was that a planet has lost its supply of men, so all these vixens have to teleport themselves to …you get the anti-picture.

There are dozens of films like this at Cannes every year, and on MovieMax 7 cable a year later. Twenty minutes seems to be the polite amount of time to watch, and at that point there was a Saigon75 dive for the exits, except for the vixens themselves and the rest of the cast, who were well psycho, laughing at every bad gag throughout. Cashed-up California dentists, what this sort of sh-t runs on.

Anyway, after A Screaming Man, there was no going back to the Marché. Something stronger was required. So I went to the Nikki skincare party.

The Nikki party, down in a beach marquee, is a legend, so they tell me. We were waved down into it, with nary a second glance. Most of the people there wouldn’t know a serious film, except when their recurrent herpes starts weeping every two months. It was an all-white marquee, most of the folks were in white, the DJing was white, even the black people were white.

Nevertheless, news is where news goes. So there was nothing else to do but to reassemble the national affairs desk with whatever came to hand, and the girls of Fashion TV were happy to help out. 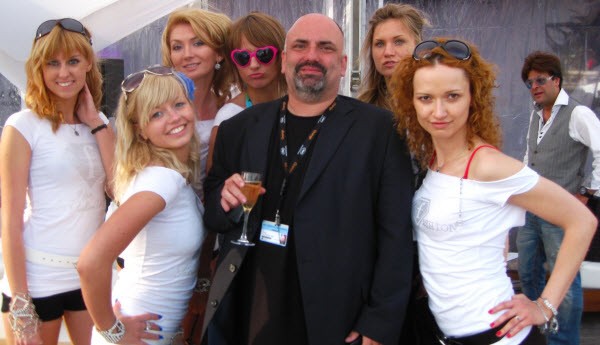 Our hero, Guy Rundle, and the girls of Fashion TV at a party in Cannes

My god, it was empty. It was so empty. It was meta-empty. If a bunch of people from north Chapel Street had turned up they would have gone “whoaah, steady on….this is empty,” you feel me?

Everyone was raising the roof to M.I.A. After three hours, that got boring. No one else seemed to feel that. The women were either supermodels or voluptuous, like an Austin Powers movie. The men were evil. The whole place smelt of crime and lubricant. The bartenders fired dry ice cannons at grey-haired women dancing on podiums. They liked it.

There were a dozen parties like this, stretched all along the strand, lights twinkling in the distance. This may have been the worst. But hey, it was the one we could get into.

God knows what Nikki skincare sells. Creams? Tractors? What the–?

But it’s day three, and still no Bunbury sighting. No Bunbury. No Stratton. We even have the cutout masks prepared for Stratton. Where is he? Does he have an underground tunnel to the Bazin cinema? Do they levitate him up into C3, his favourite seat? Where are our heroes?

In the free bar at the Palais, I suspect, marinating slowly. But hell, the struggle continues. We are still not on a yacht. We seek now the p-rn yacht, pretty big we’re told, as you’d expect. It usually comes in early for the p-rn buyers’ fest, directly after the festival proper. A taxi driver on the channel islands told us about it. Onwards! One and a half films seen, and only four hundred to go.

Now all we need to know is what Kyrgyzstan is thinking … them, and next year’s selection committee…

Should the ABC foot the bill to send Margaret Pomeranz to Cannes?

Rundle in Cannes: Does Tim Burton really know what serious cinema is?

Rundle in Cannes: Oh, for a few spare invitations

Great picture. You should have a competition for the best caption of what the bloke in the background is saying.

Bless you and curse you Guy Rundle.
So many pearls and such a “convincing” grimace of pain on your dial in that photo. 🙂

But in the final washout, words are your strong suit.
So the winner is………..

[It was like someone had upended the French Foreign Legion prison into the Lauriston year 12 swimming carnival.]

Can anyone help me out here? Does Guy make the girls look very good or do the girls make Guy look very bad?

I agree Edward, and my entry would be, “He thinks he’s got the chicks, but that fool needs a rug if he wants to be a serious babe magnet like me.”

Guy, it’s clear you are suffering for your art. Don’t think it’s not appreciated.

Paddy, surely this is the standout for today:

“Most of the people there wouldn’t know a serious film, except when their recurrent herpes starts weeping every two months.”