King Berenger the First -- the protagonist of Eugene Ionesco's celebrated farce Exit The King -- is solipsistic and belligerent and near death. Thai King Bhumibol Adulyadej is also dying.

King Berenger the First — the protagonist of Eugene Ionesco’s celebrated farce Exit The King — is solipsistic and belligerent … and near death.

Wikipedia describes the play’s synopsis: “He is informed early in the play that he is dying, and the kingdom is likewise crumbling around him. He has lost the power to control his surroundings and is slowly losing his physical capabilities as well. Through much of the play, he is in denial of his death and refuses to give up power.” 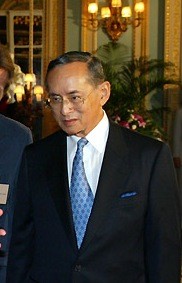 As Asian expert Professor Damien Kingsbury tells Crikey today, he almost certainly has the extraordinary power to intervene and avert escalating violence in his country. Still, the monarchy remains silent.

Even drawing a comparison between the fictional Berenger and the Thai King would be seen as disrespectful to the crown, with severe penalty. So we won’t draw it.

I have very little time for monarchies in general. When they don’t or can’t play a useful role in their country’s affairs then I have no time for them at all.