It was neck and neck in media coverage between the PM and Opposition Leader this week, but there was lots of change in the bottom half of the list with a variety of ministers fighting it out.

Neck and neck in media coverage between the PM and Opposition Leader, broadcast preferring the comedy video stylings of T.Abbott, while press and internet continue to go after K.Rudd over his perceived lack of policy courage and poor poll showing with considerable vim.

Lots of change in the bottom half of the list, with Chris Evans announcing skilled migration changes, Nicola Roxon again the main winner in the Budget, Jenny Macklin trying to get maternity leave in the news and keep the NT food quarantining study out of the news and Kate Ellis getting a lovely trip to Lausanne with her friend Frank.

Penny Wong proved me wrong by bouncing straight back into the list, however it was almost entirely due to being name-checked as such a hard (if pointless) worker in Copenhagen by her mildly miffed (or wildly raging, according to which media you consume) boss on the 7:30 Report. 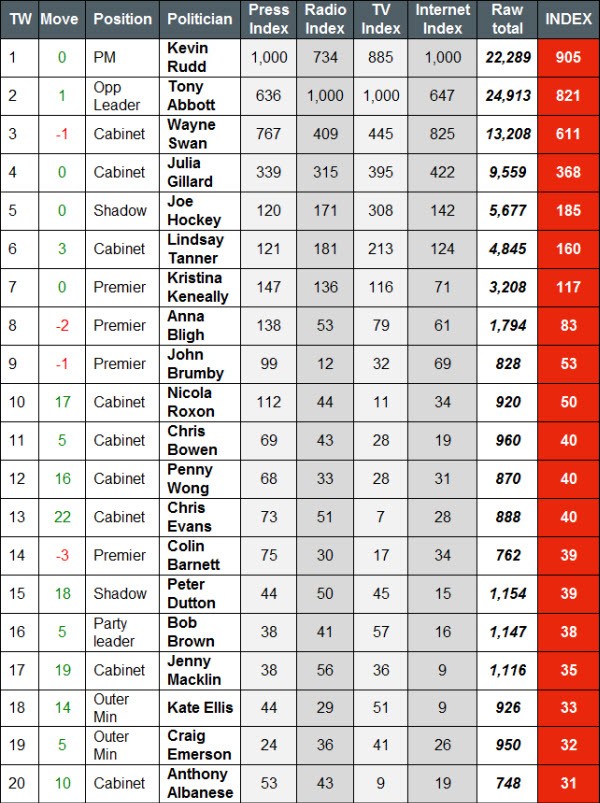 Another close battle here, and miles ahead of anyone else – the presidentialising of Australian politics continues apace.

Well, of course, having the best car on the grid does tend to help a bit in Formula One, but nevertheless our lad from Queanbeyan is killin’ it over there amongst the Eurotrash.

Some survey figures on racism