Tony Abbottt and the Pinocchio supremacy

I refuse to join in the verbal punishment of Tony Abbott for admitting that he sometimes tells untruths. Plus, Chinese reference to an economic Titantic and other political news of the day.

Don’t threaten with Pinocchio’s nose. I refuse to join in the verbal punishment of Tony Abbott for admitting that he sometimes tells untruths. My research this morning tells me that if a child confesses, I should thank him for telling me the truth. So thank you Tony for being so frank on the 7.30 Report. I understand that the academic studies show that if kids are only punished for lying, they will be more likely to lie in the future. Not for me to start telling you punishment stories like how Pinocchio’s nose grows longer when he lies. I’ve got the message that yarns with an ending that shows truth-telling as a good thing appear more effective at damping lying than fear.

So let me tell the Leader of the Opposition not to worry about the mock indignation this morning that has greeted his truthfulness about his lying. We the people understand because we all do it and we know that politicians are no different than the rest of us. Whether we’re two years old or 62, I read in the Wall Street Journal recently, our reasons for lying are mostly the same: to get out of trouble, for personal gain and to make ourselves look better in the eyes of others.

That definition seems to fit political lying pretty well. And I noted in that Wall Street Journal article that the ability to lie — and lie successfully — is thought to be related to development of brain regions that allow so-called “executive functioning,” or higher order thinking and reasoning abilities.  That’s not a bad thing for a leader to have.

The politician’s creed: lie or at least obfuscate. An interesting international example of political truth telling this morning too. Whatever you do, don’t say what you really think. That was the clear message from Germany’s economics and technology minister Rainer Bruederle to any of her nation’s bankers thinking of talking about the current crisis in Greece and its impact on the Euro.

Last week Deutsche Bank Chief Executive Josef Ackermann in a TV interview cast doubt on Greece’s ability to repay its debt. As Reuters reported it, Ackermann, one of Europe’s top bankers who has helped to put together a private-sector bailout package for Greece, questioned the country’s ability to turn itself around, according to excerpts of a transcript for the Maybrit Illner talk show set to be broadcast on German television ZDF “Whether Greece over this time period is really in a position, to bring up the strength , I have my doubts,” Ackermann said in the transcript, adding that this requires “unbelievable efforts”. If Greece were to “fall down” this could spread to other countries and lead to “a sort of meltdown,” Ackermann told ZDF.

It was probably a pretty accurate assessment and not much different to what many economic commentators have predicted., But for German Minister Bruederle such frankness should not occur. The English language version of the Greek newspaper Kathimerini reported his comments this way: 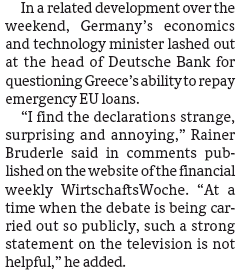 Chinese reference to an economic Titanic. When the Chinese Premier Wen Jiabao starts warning that his country faces tough challenges in balancing economic growth and tightening policies, Australians should at least start pondering just how rosy is our own economic future. When Chinese economic commentators start using a comparison with the Titanic to describe their conditions we perhaps have a reason to be seriously concerned.

At the weekend during a trip to the northern port city of Tianjin, Premier Wen warned that China must avoid piling on adjustment policies, which carry risks of “negative consequences”, amid complex domestic and international conditions. “At present, the national economy continues to improve, but domestic and external conditions remain extremely complex, and macro adjustment faces many dilemmas,” he said.

The China Daily in its report of the speech had analysts saying his remarks show the tough choices policymakers are facing as rising inflation and signs of slowing economic growth are intertwined complicating the situation. This morning the paper had this commentary:

Xin Zhiming argues that rising inflation and surging inflation make the current circumstances more difficult for the country’s economic policy makers than when they reacted to the global financial crisis. Given the already lax liquidity and exorbitantly high house prices, the government has few choices but to keep them under control. “Tightening measures, meanwhile, risk dragging on economic growth, as reflected by the stock market reaction.”

I have referred recently in these political snippets to what is happening to the Shanghai Stock Exchange Composite Index being a rough guide to what the market thinks of China’s immediate prospects and yesterday’s five percent fall just increases my apprehension about what it foretells. 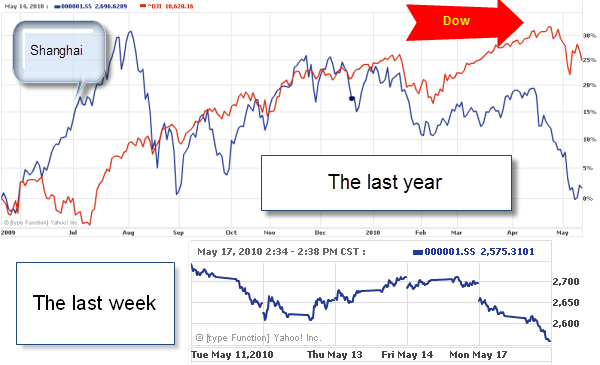 It seems to me that the market has serious doubts about the ability of Premier Wen pulling off the difficult feat of stopping housing and other price rises without stifling economic growth. The risk of a European and global economic slowdown affecting Chinese exports compounds the problem.

Which is what led Xin Zhiming to this Titanic allusion: 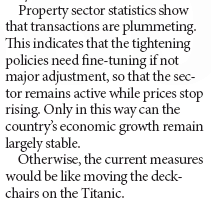 Everytime Abbott speaks ‘off the top of his head’ we don’t know if it true or untrue, a lie. When he reads from a prepared script we are expected, even though he is an admitted lair, to take as gospel whatever he says., because he the liar says it is not a lie but the truth.The monk who is mad has been watching too much Yes Minister/Prime Minister.

What a wonderful sense of morality you have Richard. We can all now lie through our teeth and call it ‘executive functioning’ and should Abbott become PM he can justify his lies to other Heads of State. Fantastic example for our future generations, isn’t it!!

What absolute rubbish Richard.
I expected far better from an experienced political journalist like you.

Everyone knows, that it’s Tony Abbott’s *ears* that grow bigger when he lies.

Richard, God hates liars.
He will exclude them from heaven and cast them into the lake of fire.
Hallelulja.