Get set for another surplus: this time in housing

Combined with increasing interest rates (as the cost of money returns to a more reasonable level), it appears that the market will be belatedly doing its job, proving the adage, the solution to high prices is … high prices.

The wonderful thing about a free-market in action is that price changes have a causal effect on supply and demand. While many markets, especially the residential property market, are grossly inefficient, subject to government intervention and misrepresentations from vested interest groups, eventually, prices will return to their intrinsic values.

In recent years, the residential housing sector has experiences a dramatic increase in price. The oft-stated rationale for the house price inflation was due to an alleged housing shortage, which was caused by a combination of immigration, higher birth rates and reduced construction activity. The quantum of the price rise has been significant. The critical guide of housing price levels is the ratio of house price relative to disposable incomes — this measure has seen house prices (compared to income) double in little more than a decade. Prices have also increased in real (inflation adjusted) terms — as Steve Keen’s graph below indicates, since 1996, house prices have risen at double the rate of inflation: 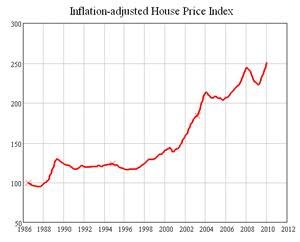 But as this column noted last year and any basic economics textbook would instruct, in a functioning market, prices will provide signals to consumers to alter their demand and to producers to increase supply.

As Keen pointed out in Business Spectator the so-called housing shortage has only materialised in the past 2-3 years — between 1986 and 2006 the rate of dwelling construction easily exceeded the rate of population growth.

But while the alleged shortage is probably an irrelevancy in any event, it appears that even the mythical shortage probably won’t last too long. Already, housing approvals have increased sharply in recent months, with the ABS reporting that approvals rose by 15.3% in March, hitting their highest level since October 2003. Based on recent figures, about 170,000 dwellings are forecast to be constructed this year — providing shelter for around 440,000 people (less the effect of dwellings that are being replaced).

But not only are developers rushing to cash in on the higher prices, but the lack of affordability is causing politicians to re-think Australia’s heavy immigration policy (voters who can’t afford to buy a house may be disinclined to vote for the party that played a significant role in the house price appreciation). Fairfax noted a report (released yesterday) from forecaster BIS Shrapnel which stated:

“Breakneck pace of population growth over the past few years can be explained by an unusually large rise in long-stay visa holders such as foreign students and 457 workers.”

However, a slackening in the jobs market and a slower pace of enrolments by foreign students is expected to mean this one-off bulge in numbers will pass through.

In total, BIS expects immigration to fall from 298,900 this year to only 145,000 in 2012. If those predictions eventuate, it seems like Australia’s great housing shortage will turn into a massive housing surplus with thousands more dwellings being constructed than is necessary to match the population rises.

Combined with increasing interest rates (as the cost of money returns to a more reasonable level), it appears that the market will be belatedly doing its job, proving the adage, the solution to high prices is … high prices.

Australia’s housing bubble has led to politicians reducing immigration levels, developers increasing construction to cash-in on higher profit margins and the cost of borrowing increasing — all symptoms of a functioning market in action.

This is what we wrote to our client base in early Jan this year.

This time last year, and contrary to popular analysis at the time, we correctly forecast that Australian residential prices would rise during 2009. The talking heads now, almost in unison, are stating that a housing upswing is well underway – new construction and sales will grow as repeat buyers and investors replace first timers and strong population growth will keep the market undersupplied, lifting both end values and rents. Many expect the lift to take place across most locations and all market segments.

Well, 2010 (and the next couple of years) looks somewhat uncertain to us. Investor interest is already waning and many second and subsequent buyers are unlikely to trade up unless employment improves dramatically, which is unlikely given rising interest rates. Net rental yields are more often than not negative and end prices are high, making investment property expensive – especially when borrowers need to secure a deposit and cover purchase costs out of their own pocket. Investors and repeat buyers alike are likely to be quite discerning and more so than they have been in recent years.

Yet many property bulls continue to claim that property prices outstripping inflation is perfectly legitimate, due to population growth and alleged shortages. Some property “experts” are advocating, due to the imminent housing shortage, that strong price growth is assured.

Well, the Australian residential market is likely to be over not undersupplied this year. Why? Construction activity is already high; the average household size is on the increase; the lift in net overseas migration has less impact that most think; the rental market is not as tight as the real estate industry would have us believe and we have lots of unoccupied dwellings across the country. Whilst we have over consumed in housing for many decades, the last twelve months have seen many decide to rent out or sell their underutilised unoccupied asset. This more frugal mindset could continue.

Most years a market is buffeted by an unforeseen factor or two. This “X-Factor” in previous years has been things like 9/11; changes to superannuation or the global financial crisis. This year it could be underlying housing demand and its supply. We expect this debate to gather momentum in coming months as we argue how much housing we need, whether there is enough already and what and where it should be.

This article, and several others that have followed, did not go down that well with several developer clients. No surprises there!

Funny – an article about supposedly “efficient” markets and the makings of an oversupply – and yet not one mention of prices dropping.

When supply exceeds demand the price will drop to a new equilibrium. Isn’t that the first statement in any Economics Basics 101 textbook?

Perhaps thats because its the evil beast that people dare not speak its name – a drop in property prices in Australia.

Adam – How can you write an article about the obscene rise in house prices without mentioning the elephant in the room?! Until some government has the intestinal fortitude to do something about negative gearing and capital gains rorts, then the fiddling around the edges will make no difference at all. What makes everyone think that Australia should be the only nation to escape a price correction of some 30-40%? That is about the drop needed to return house prices to their actual value. Who on earth is going to be able to afford rental housing, let alone purchase, if this situation continues? Surely this is a recipe for massive increase in the homeless rate.
To return to the rorts! I think the only investors who should benefit from these over-generous tax concessions are those who rent to low income earners. While the rental amounts would have to vary between cities and country/rural towns, it should not be too difficult to set a top rate for each city/town. Anything above this would not be eligible for negative gearing, and would attract the full capital gains tax.
The only other alternative seems to be large wage increases to enable people to provide a roof over their heads. I’m sure business owners would just love that!! But then, there has always been the needy and the greedy. At present the latter seem to have adopted a “winner take all” mentality, which will eventually lead to conflict in this country.