When is a car bomb not worthy of condemnation? When the target is the CFMEU

The reason a terrorist-style attack on its NSW headquarters can be ignored is because the union represents a danger to the political and media elites, writes a former CFMEU insider.

So my old workplace was attacked with a car bomb last week. There are not many people in this country who can make that statement! The attack occurred in suburban Western Sydney, missing by less than an hour a community group meeting in the building.

A group of people stole a car, loaded it with canisters of petrol, smashed it through a three-metre high wrought iron gate and crashed it into the front doors of a three-storey office block. I had a look at the damage myself less than 12 hours after the attack.  The picture to my eyes looked very Baghdad indeed. 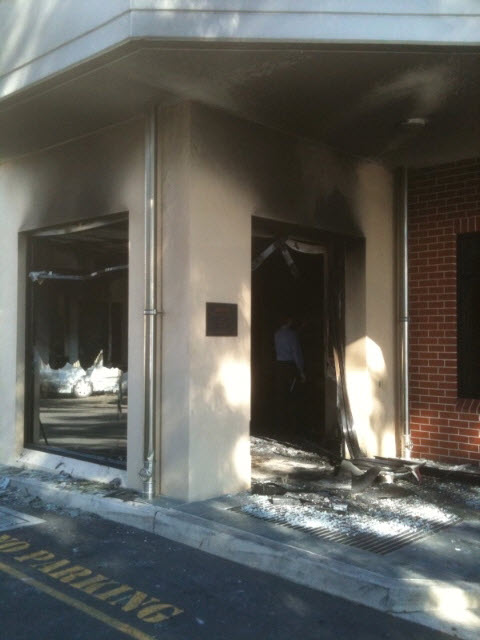 Amazingly, since the attack, not one state or national political figure has come out and condemned the violence. The reason? The target was the NSW headquarters of the construction division of the Construction Forestry Mining and Energy Union.

Imagine for a moment, if such an attack had been perpetrated on any other part of civil society. A church. An RSL. A scout hall even. Our political leaders would have been racing each other to the scene of the crime. Jostling to inspect the damage, crunch over the broken glass, comfort the staff, condemn the violence.

It would have been (mis)named as a terrorist attack. Bi-partisan condemnation would have come from all levels of government. The papers would be full of it for days.

Instead we get this … silence.

The attack got good electronic media coverage Friday but major papers such as the so-called “paper of record” in my home town, the Sydney Morning Herald, literally ignored the attack. For the readers of the SMH and The Australian, the attack just simply never happened. Not worthy of being reported on it seems. Middle-class indolence at its most revealing.

But I am mostly angry at Kevin Rudd and our political leaders. Rudd and IR minister Julia Gillard have shown their true colours here. They are fakes. Shallow fakes. A serious attempt to terrorise and intimidate a key plank of our civil society and they are mute. Too busy seeking reflected glory from Jessica Watson, in Rudd’s case. For these people, including Kristina Keneally, the puppet in NSW, condemning outrages must clearly never be about principle. This incident has demonstrated how there must always be a cynical political calculation behind every expression of sympathy or outrage. Some hollowman down in Canberra must have just done the calcs on Rudd or Gillard coming out on this and decided it didn’t fit the government’s “narrative.” Or something. Best ignored.

Clearly our political leaders are happy to associate themselves with a disaster when politically expedient, but run a mile when its not. That’s not what leadership is in my book. What a bunch of frauds.

The hypocrisy revealed in this incident is sickening. A bit of blue language on a building site and there are screaming headlines, a politicised Royal Commission (which could not find any of the corruption and organised crime in the building industry because it was only looking for it among the unions) and an industrial police with powers and an agenda that would make the Gestapo proud.  But drive an improvised explosive device into a union office? Somewhere a cricket is audible in the silence.

The shocking explanation is that what happened at Lidcombe simply does not fit with the anti-CFMEU agenda of the political and media elites in this country.

The CFMEU has all sorts of problems, I should know I used to work there. But the reason a terrorist-style attack on its NSW headquarters can be ignored in this manner is because the union represents a danger to the political and media elites. Along with just a handful of other effective unions, it remains an example, an imperfect and flawed example, of ordinary people having a little bit of power in their working lives.

That’s why the CFMEU is fair game.

I’m completely perplexed by how little coverage this has gotten.

Great article. The inconsistency between reporting on the war on terror and an actual car bomb landing in an organisation which is involved in various political issues screams out loud.

Honest question – How do you know it was a “group” of people?

What a joke the media and politicians have shown themselves to be. If this had been Liberal party headquarters we would still be hearing about it.
However selectivity as to what is newsworthy and important as ever depends on who is an acceptable victime.
A family drowning at sea is a tragedy and it is-
BUT so are 5 asylum seekers drowning at sea as they set out on a bunch of tyres seeking rescue for the men , women and children on their failing boat.

Guess the CFMEU and the asylum seekers are in the same boat.

What a load of self rightous twaddle. So the “Insider” considers the CFMEU to be in the same decent society as churches, scout halls and RSLs.

Guess what – you are thought of by the great majority as no better than bikies, and no one really cares when those thugs turn on each other.

At least the bikies try to improve there image by having toy runs.