Sydney's Sun Herald has followed in the footsteps of its rivals at News Limited, sacrificing its high arts and theatre coverage at the star-studded altar of Hollywood gossip.

Sydney’s Sun Herald has followed in the footsteps of its rivals at News Limited, sacrificing its high arts and theatre coverage at the star-studded altar of Hollywood gossip.

Crikey can reveal that just days after Melbourne’s Herald Sun announced the axing of its arts pages, the Sun Herald, once the dominant vehicle for the Harbour city’s Sunday arts scene, has decided to cut its fine arts coverage in half — cutting one weekly theatre review in its S section to save money and permanently pulling another page dedicated to stage, music, dance and classical music.

Disappointed Sun Herald theatre critic and former Rolling Stone editor Elissa Blake confirmed the cuts this morning, telling Crikey that her page “underwent a design change in order to save money on a third review” and that her salary had been slashed to accommodate Casamento and Reid. Yesterday, S featured the ‘Hot Tickets’ section where Blake’s third review used to sit, alongside a feature by the nationally-syndicated Stephanie Bunbury in place of her regular column. 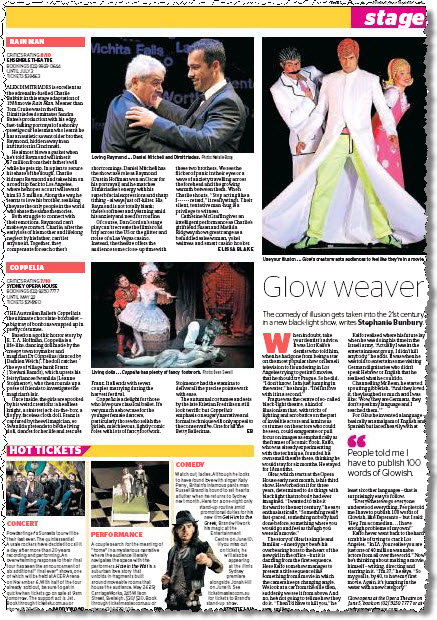 Sydney arts industry insiders are devastated at the Sun Herald cuts, firing off letters to Sams late last week and threatening to pull their ads out of the magazine.

On her Stage Noise blog, theatre doyen Diana Simmonds urged readers to “march on the Hun and the Sun Herald — or better still, close your wallets. Stop advertising and stop buying the wretched rags”.

The changes come after an upheaval at S that saw ex-editor Andrew Taylor move to the paper’s news pages to cover visual arts, thought to be a favourite pursuit of Sun Herald editor Simon Dulhunty’s wife.

Taylor was replaced by a double act of ex-columnists, with Shelly Horton taking an executive strategy role, and staunch low-culture aficionado Sams assuming S‘ week-to-week reigns as “acting editor” until she could prove her competence.

“We are proud that S is the leading entertainment section in Australia and the good news is the best just got even better,” Sams trumpeted at the time.

The broader paper also underwent a redesign to make the top of its sections yellow, a move “built around content” according to this YouTube video of Dulhunty explaining his motives.

On May 9, to coincide with the relaunch, Blake’s theatre reviews were scrapped altogether to make way for model Alyssa Sutherland’s ‘Fashion Week Diary’. The edition was guest edited by Napoleon Perdis, who is apparently a make-up artist.

A likely consequence of the axing of Blake’s coverage is a decline in column inches allocated to fringe plays at smaller venues like the Old Fitzroy and Newtown Theatres. Bigger outfits, including the Sydney Theatre Company, regularly make their displeasure known if a marquee production slips through the Sun Herald‘s cracks.

The Herald is not the only Sydney Sunday that appears hesitant to fully-embrace the arts. Crikey understands Sunday Telegraph critic Jo Litson is usually allocated one story and one review, but this is contingent on advertising orders for that week’s edition of the paper. If the week’s ad is too big, then Litson’s coverage is pared back or spiked.

Are they the devastated “Arts industry insiders” who regularly get sniffy about negative reviews?

And “pull their ads”? Sorry forgive me for smirking, but the arts industry does not advertise widely anywhere, and certainly not enough to pay for the coverage they demand. I’m a writer and contributor, I am not speaking on behalf on Fairfax management. From where I stand, this is no longer a “sustainable” industry at all.

It not the arts companies’ fault, but there is just not enough money circulating, and ( yes, thank you internet) way too many people prepared to work for free.

“The edition was guest edited by Napoleon Perdis, who is apparently a make-up artist”

That makeup artist turns over $80 million a year in cosmetics and has featured in the BRW rich list for under 40’s.
While I admit the Sun Herald “S” section is a bit “light weight” to say the least, to get a guy like Perdis for fashion week is a bit of a coup. Best to do some research before writing an opinion piece (or is crikey becoming a little light weight as well)

Sorry Scott, I originally wrote “cosmetics king” in the vein of your beloved BRW. Must have been removed by the subs.

Hey Russell – if you haven’t noticed the regular full page ads for major musicals, the state theatre companies, dance companies, art galleries, commercial producers and so on; never mind the smaller but just as regular ads from 2nd tier companies, independents, touring productions and live music producers then they should definitely stop advertising – cos they obviously don’t work!

What’s the betting on sports and celebrity getting even more space and dumbing down continues on unabated.