There's no evidence there to support Labor changing its leader, but there's plenty to support global warming. Plus: limiting the liability of oil explorers, a rare piece of praise for The Oz on Aboriginal affairs and more political tidbits.

The price of early popularity. You could almost detect the glee with which another set of bad opinion poll numbers for Kevin Rudd were greeted by some journalists this morning. After all, Newspoll had given them another excuse to write on their favourite topic — leadership speculation. Hence, Julia Gillard’s face was on front pages everywhere.  But perhaps the following graph will give a bit of perspective to all the analysis of what Labor and Rudd’s decline in the polls actually means. It plots the advantage/disadvantage that prime ministers Keating, Howard and Rudd had on the Newspoll question of who would make the best PM during their first term in office: 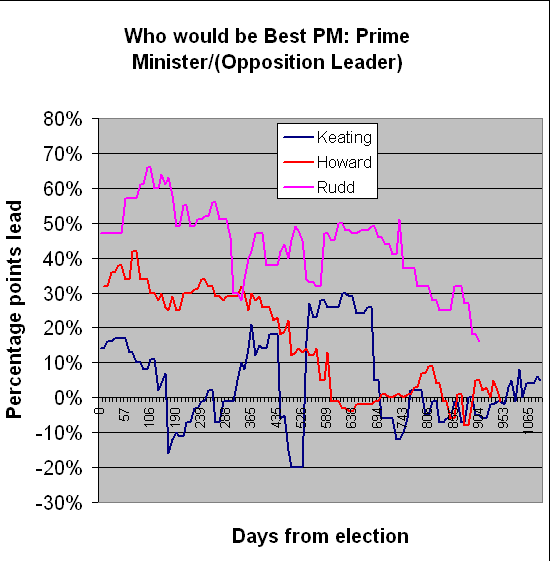 What is very clear is that Rudd had an extraordinarily good response early on in his prime ministership but that even though his lead has declined substantially he is still doing very much better than his two predecessors. There is no evidence there to support Labor changing its leader.

Alas, poor Kevin. Our Prime Minister quit the fight too early but there’s still time for him to get back into the role of being the defender of action against global warming. The evidence for him to use that the world is getting warmer is mounting again with the latest figures showing that it was the hottest April on record in the NASA dataset. 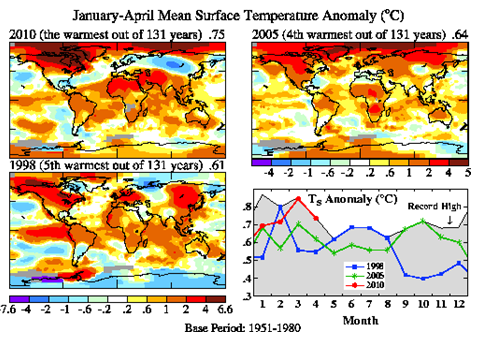 The April high follows the hottest March on record and makes the January to April period the hottest NASA has recorded as well.

Paul Krugman on his blog this morning has plotted the temperature anomaly — the difference, in hundredths of a degree centigrade, from the average over 1951-80: 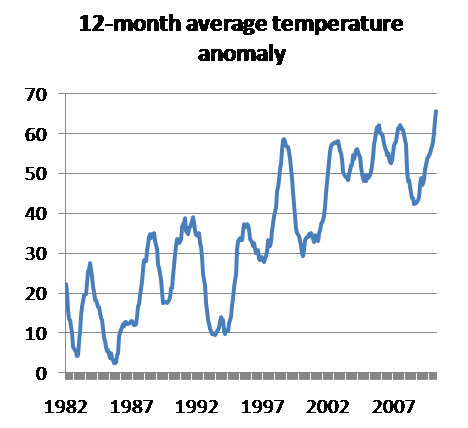 As Krugman comments: “So much for the ‘global cooling’ talking point. What I’m wondering is what excuse the deniers will come up with.”

The way the political world works — limiting the liability of oil explorers. The liability of offshore oil explorers in the United States for environmental damage is limited by current legislation to $US75 million. That’s hardly a figure to stop companies from taking a risk or two. BP probably earns that amount every hour of the day. So it was last week that Senator Robert Menendez (Democrat, New Jersey) introduced a Bill in the US Congress to increase the maximum liability to a more realistic $10 billion.

The American Petroleum Institute (API) quickly sprang into action expressing its opposition to the proposal arguing that doing so would “threaten the viability of deep-water operations, significantly reduce US domestic oil production and harm US energy security.” Alaska’s Senator Lisa Murkowski agreed and found a procedural way to stopping the Bill.

The website TPMmuckraker reports that like numerous Alaska law makers, Murkowski counts the oil and gas industry as a major backer. According to online records, it has contributed more than  $426,000 — more than any other industry aside from electric utilities — to her campaigns over her career.

A media note: in praise of The Oz on Aboriginal affairs. My guess is that when people such as me put on their pundit’s hat and criticise The Australian for some of its strange editorial twists and turns, it is really nothing more than an acknowledgement of the importance we attach to this one national daily. The conservative streak might not be appreciated but it is the one newspaper in the country that takes a broad look at our society without the local city blinkers of the other dailies.

And the weekend edition again proved there are some national issues that only The Australian even attempts to cover on a consistent basis, with Aboriginal affairs being one of them. For month after month — year after year, really — there has been a critical questioning of the actions of the Queensland police in investigating the death in custody of Mulrunji Doomadgee. Saturday’s summary of the reaction to the latest coronial inquiry should be a must read.

Sure we get the stories about welfare bludging and the horrific stories of alcohol addiction and domestic violence, but the good news is covered as well. Like the story of Donald “Duck” Chulung, also on Saturday, who hopes he is the first of many Aboriginal entrepreneurs in his home town of Kununurra, the Kimberley outpost that has started to boom on the back of a $415 million expansion of the Ord River scheme. Along with criticism of the pace with which the federal government is acting to try and solve the Aboriginal housing crisis, we find as well in The Australian stories such as this one for which I could not find a link on the website: 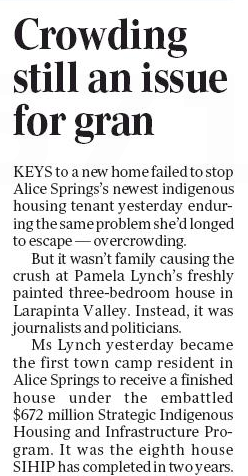 Re global warming. Many thanks for taking another toy away from your most prominent serial climate offender, who I will refrain from naming here because I choose not to bring forth another blind and dead-wrong outburst.

One by one, the refuges of the global warming deniers are being demolished in public. If only our governments and oppositions, Federal and State, would get with the agenda and show a bit of urgency.