The parting shot at gossip-mongers … The Age’s dodgy graphs

A departing 2GB exec takes a swipe at news leaks, The Age plays up circulation with some dodgy graphwork, Nine finds the grittiest backdrop its studio can offer for Thailand reporting, and other media snippets.

A lesson in keeping quiet. When you’ve handed in your resignation and it’s your last day on the job, it might be better not to send that pointed email complaining about a former colleague. Especially if you are complaining about that colleague’s propensity to leak information to the public. Unfortunately for Phil Sylvester, former executive producer of the Chris Smith Afternoon Show on Macquarie’s 2GB in Sydney (and now at MTR in Melbourne), this lesson might be learnt the hard way:

Just wanted to say how much I’ve enjoyed working with you all. MRN is full of smart, funny, hard-working, professional people.

You deserve the success that comes your way. The next step I’m taking is because I’ve learned so much from you all. For that, thanks.

So good luck to you all… all except for one person… ‘radio sources’. I don’t know what’s lacking in your life that makes you feel good about betraying your workmates. Is it some bizarre notion that you’re important because of the information you ‘leak’? Let me tell you, the people you tell those rumours to, think as little of you as your colleagues here at MRN. If you feel such contempt for the people who work with you, put their trust in you and share a laugh with you, you need to take a long walk through the hall of mirrors.

Everyone else… I love youse all!

The Age of dodgy graphs. It’s quite clear from these graphs that The Sunday Age is the leading weekend read in Melbourne. I mean, look at how the graph shoots up for the Fairfax broadsheet and how it falls away for the rival Sunday Herald Sun. Never mind that the News Limited tabloid circulates some 384,300 copies MORE than The Sunday Age. Or the doctored graphs with increments of 1,000 for The Sunday Age (to show those steep increases) and 5,000 for the Sunday Hez (to exacerbate those alarming declines). — Jason Whittaker 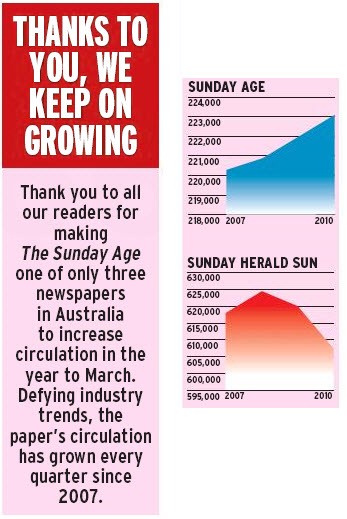 Nine News tries Thailand trick. With violence and bloodshed continuing on the streets of Bangkok, Channel Nine News were keen to report the recent developments last night. After footage of the clash between the Thai army and anti-government protesters, Nine cut to reporter Neil Doorley standing in front of a menacing-looking barbed wire fence. If the aim was to make it look like Doorley was reporting from Thailand, then the attempt failed; he’s standing outside the Channel Nine studies on Mount Coot-tha in suburban Brisbane. — Matt de Neef

Herald Sun shakeup continues. In the wake of our coverage of the paper’s slew of departures last Friday that drew the ire of the journo’s union, Crikey can also report that gifted Victorian politics reporter Geraldine Mitchell recently jumped ship to work as a spin doctor for the beleaguered public transport operator Metro Trains. “It hasn’t been announced yet so we can’t put you through”, a Metro receptionist warbled when we called to chat with Mitchell, who starts spinning next week. Meanwhile, Crikey understands a very senior Herald Sun sub editor and a senior food columnist are also set to exit the Southbank asylum in coming weeks for a better life. — Andrew Crook

“Whether it’s in the news or on Twitter, YouTube or Google, there’s a wealth of information being created, searched and shared every minute. Newsfeed is your in-the-moment guide to what matters most.” — Newsfeed

“Sony Corp. is considering developing a tablet-style computer that would compete with Apple Inc.’s iPad, though it wants more evidence consumers will buy them, a company executive said.” – Bloomberg

“As if one media revolution at a time wasn’t enough, the twin powerhouses of traditional media print and television are simultaneously grasping at technologies they hope will reserve them a new, irreplaceable corner in people’s hearts.” — The Australian

“Over the past 24 hours, searches related to deleting Facebook accounts have been some of the top trending items on Google — indicating that the tech-world furor about the social-networking site’s privacy policies may have become more mainstream.” — Wall Street Journal

…”Or the doctored graphs with increments of 1,000 for The Sunday Age (to show those steep increases) and 5,000 for the Sunday Hez (to exacerbate those alarming declines).”

Jason the larger increments of 5,000 show a less steep decline (one fifth to be exact) than if increments of 1,000 had been used.