"GORD IS GONE," The Sun declares. "CAM IS PM." Crikey wraps the media feeding frenzy as Gordon Brown relinquishes the keys to No. 10 to David Cameron.

Conservative leader David Cameron has become Britain’s 53rd prime minister after Gordon Brown announced last night he would relinquish the role. Brown met with the Queen around 7:30pm local time to tender his resignation after Labour’s coalition talks appeared to have failed.

Forty minutes after Brown’s meeting with the Queen, Cameron met the monarch to accept her offer to become prime minister. As the Daily Mail points out online, after the constitutional crisis that enveloped the country since last week’s nail-biting election, victory for Cameron and his expectant wife is sweet … 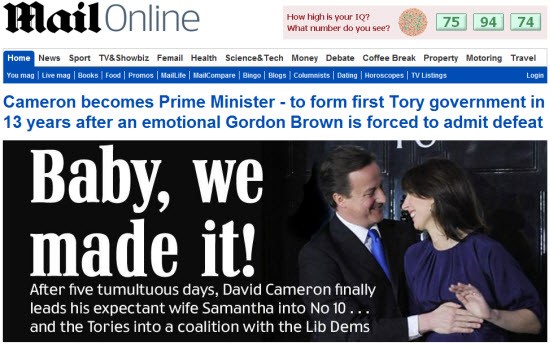 The Cameron-led Conservatives managed to secure an alliance with Nick Clegg’s Liberal Democrats in a deal that should see three Lib-Dems join the Cabinet and Mr Clegg take up the mantle of deputy prime minister. Details of the coalition are sketchy, though The Guardian got the scoop by deciphering Clegg’s hand-written negotiating notes. Electoral reform was at the top of the list.

A crucial ingredient in the left/right coalition was Cameron’s promise to hold a referendum on the issue of voting reform. Writing for the Daily Mail Edward Heathcoat-Amory suggest while Britain’s new PM may be committed to his decision to “put the change to a national vote”, his “Conservative peers may not feel obliged to honour” his promise.

The new-day papers are beginning to emerge. The Independent declares Cameron now leads a “Brokered Britain”, but with “rumbling dissent on the backbenches”.

The Times political editor Roland Watson suggests coalition talks between Labour and the Lib-Dems failed because there “was little goodwill” between the parties. According to Watson, the Clegg’s party had “accused Labour of playing politics” and Labour accused “their counterparts of making unrealistic demands”.

Also at The Times, Sam Coates and Francis Elliott argue talks between the Lib Dems and the Tories were successful because there were several areas that “provided scope for easy compromise”. In particular, the areas of “education, health and the tax system” would provide common ground between the two parties.

Writing for The Guardian Michael White says once the decision to resign had been made, things were “over so quickly” for Brown. After being “forced out” by the Tory/Lib-Dem coalition, Brown was quick to “offer up the seals of office — and resign as Labour leader too — immediately”.

Also at the Daily Mail, Gerri Peev suggests Clegg is also likely to face “disaffection in the ranks” over his party’s alliance with the Tories. According to Peev, party members could “torpedo a coalition agreement through a vote of no confidence” forcing the breakdown of the Tory alliance and the need for another election.

Brown had nowhere to go but out the door and into history. I suppose next comes his book blaming his demise on Tony Blair.

Isn’t it time people started talking about News Ltd/Corp papers, concerns etc. in the same way as they talk about tobacco: buggers your health, even if everyone else says it’s OK.