A good week for Wayne, with the ugly Treasurling growing into a serious, fiscally responsible powerswan -- well that’s definitely the spin from the "politics free zone" in the Treasurer’s office.

The ugly Treasurling has grown into a serious, fiscally responsible powerswan — well that’s definitely the spin from the “politics free zone” in the Treasurer’s office, as Wayne Swan did a pretty good job of making a $40bn deficit seem economically responsible, with a surplus now forecast for 2012-13, forcing the Opposition to focus on forecast rubberiness as their main attack.

Stephen Conroy and his super duper net nanny finally received a fair amount of mainstream media coverage as did the continuing battle with Telstra over the NBN, while Chris Bowen was busy spruiking the resources tax.

Lindsay Tanner also jumped up the list as you would expect at this time of year and Christopher Pyne got a bit of radio coverage out of the BER inquiry, while Penny Wong dropped out of the list (will she ever be back?) 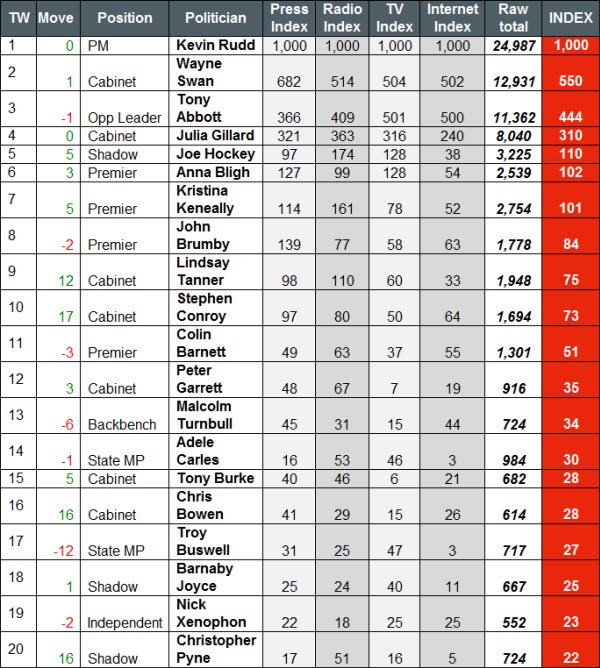 All the focus is on the Prime Minister and the nature of his character.

We all just knew she’d do it, didn’t we? Deep, deep down. Even though those sailing technocrats are trying to deny the glory, sailing round the world is bloody well sailing around the world, innit?

Tips and rumours: Libs give out <em>Oz</em> party bags

Rundle’s poem of the week

How did the 16-year-old sailor collide with a ship?