The Melbourne real estate advertising war has heated up, with the ACCC set to probe Fairfax Media for predatory pricing following a complaint from bitter rival MMP Media.

Crikey can reveal that MMP, headed by former Age property editor Antony Catalano, will soon write to the regulator, alleging that Fairfax has broken the law after it offered free space to sellers who advertised in Catalano’s Weekly Review, but whose properties were passed in at auction. Late last week, the media giant dispatched letters direct to unsucessful Weekly Review vendors, promising them three full page ads worth a total of $6750 for nothing.

The maximum penalty for predatory pricing breaches under Section 46 of the Trade Practices Act is $10 million.

The controversial letter encourages sellers in Melbourne’s leafy eastern suburbs to go behind their agents’ backs — many of whom have signed with Catalano — and approach Fairfax directly.

“Whilst auction clearance rates have been strong over the past few months – the last week or two have proved challenging for a number of Stonnington and Boroondara vendors whose properties have unfortunately passed in at auction,” the letter reads.

“We understand that you may be one of those unsuccessful vendors. As such, Melbourne Weekly would like to offer our assistance to market your property free of charge– if you still require it.” 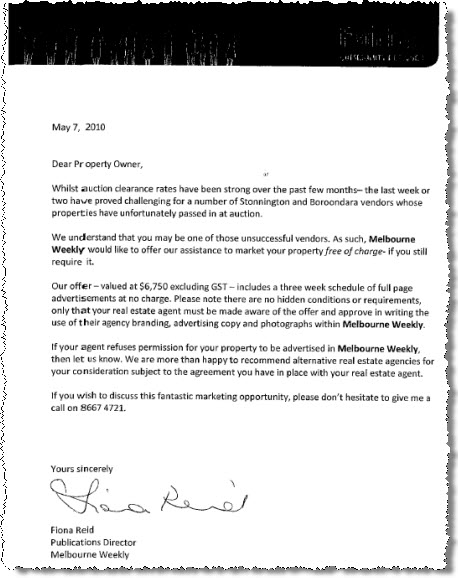 The letter, believed to have been approved by the highest levels of Fairfax management, is accompanied by a below-cost contract that appears to lock the seller in to a 12-month advertising term with the company.

According to the ACCC, predatory pricing occurs “when businesses that have substantial market power take advantage of that power for the purpose of eliminating or substantially damaging a competitor, preventing the entry of a person into a market or deterring or preventing a person from engaging in competitive conduct in a market.”

The offence is notoriously difficult to prove, but the regulator, headed by competition sage Graeme Samuel, actively encourages that complaints be submitted.

Crikey understands that Catalano will soon write his own letter to Melbourne Weekly advertisers to alert them to Fairfax’s “free” offer, encouraging them to take it up. Such a move has the potential to cripple the publication’s revenue, if vendors responded en masse.

“Good business is about rewarding your customers not treating them like second class citizens,” Catalano told Crikey.

He implored aggrieved Melbourne Weekly advertisers who are unaware of the offer to pester Fairfax to make sure their future ads appeared free.

Glossy advertising in Melbourne’s leafy east is a $20 million a year bonanza for firms that can tap the river of revenue from prestige properties amid the current real estate upsurge. Last month, Catalano, who helped Fairfax develop its advertising strategy in the early 2000s, staged a revenge attack on his old firm, with the 292-page Weekly Review launched with much fanfare. He claims to have snared around 87% of the real estate advertising market in the leafy eastern suburbs region, previously dominated by Fairfax.

Catalano has teamed with Fairfax radio competitor, Melbourne Talk Radio, and rumours persist that the renegade agents will soon complete a deal with News Limited to transfer ads from Saturday’s Age across to either The Australian or the Herald Sun. Yesterday, advertising appeared for the first time on MTR from Fletchers Real Estate, whose chairman, Melbourne property doyen Tim Fletcher, was recently removed from his regular Friday slot on the Fairfax-owned 3AW. Fletcher was believed to have spent $10 million a year with the company.

No one from Fairfax was available to respond to Crikey’s queries before deadline.