Behind the scenes: journos mull over a boring Budget

There's no cosier relationship than the one between the federal government and the Australian political press pack.

There’s no cosier relationship than the one between the federal government and the Australian political press pack. It’s just that the back-scratching is usually hidden behind anonymous sources, deep background briefings and off-the-record texts.

The annual charade that is the Budget lock-up strips away the pretense. For six hours the Treasurer has the nation’s most obedient scribes right where he wants them, overseen by pert public service minions playing a bizarre courier/security/junk food supplier role. And all without an official WiFi connection.*

Security was a breeze this year, with Crikey missing the rush completely, possibly due to a laboured lamb souvlaki at the dining room for lunch. By the time we wandered over to the converted committee rooms, scanners were nowhere in sight, shoes remained tied and the specially-reserved News Limited and Fairfax gulags were already filled to capacity.

The overwhelming fear that this Budget would prove to be one of the most boring in recent memory was confirmed when one of our ALP adviser-acquaintances noted wearily that there were no surprises as we loitered around to collect our 30kg official black and white showbag emblazoned with the Southern Cross and the Coat of Arms.

And despite months of emailing to secure our place among the good and great, there appeared to be no official record of our presence, with an initial possie next to some obscure trade publications finally replaced with a more prominent location adjacent to the straight-laced finance experts from Reuters and Bloomberg (and some guy doing an Australian Music Examination Board exam) in committee room 1R1. 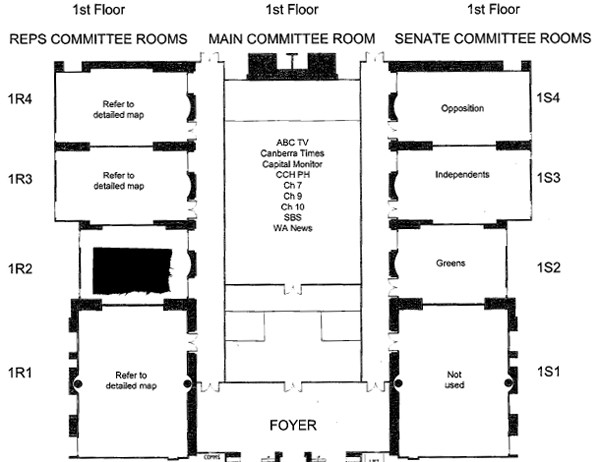 Crikey briefly spied our former political editor Christian Kerr, James Massola from the Canberra Times, bubbly Fairfax radio burbler Latika Bourke and Dennis Shanahan lurking around the corridors; but mostly it was a heads-down affair as the hacks leafed dutifully through the numerous press releases to extract the headlines.

In fact, there was little choice, with nothing in the way of a blockbuster announcement to raise antennas for those that had been following the leaks in the lead-up. The no-frills predictions were on the money — a cursory leaf through the official papers showed that Wayne’s year of toil amounted to virtually nothing that hadn’t been heard all week.

That the stand-outs included a tax break for boat builders and a predicted return to surplus a few years ahead of earlier predictions (a pledge that will vanish overnight if the Greek meltdown turns into GFC II) underlined just how dire this exercise would prove.

The disciplined scribes kicked into gear, Crikey‘s own economic star John Quiggin fended off autograph requests from the minions (one addressed simply to James) and Reuters set out their economic flashes to dazzle the wires in five hours time.

*Wi-fi was actually freely available throughout with the unsecured Free Public WiFi and Canon12 hotspots beaming signals deep into the interior. Crikey, concerned about our tenuous lock-up invitation being revoked, declined to connect.

Cox: The fairy tales being told of the RSPT

Theatrics aside, Hockey and Robb have made a good start

Budget reply: the battle of the incompetents

Heck Andrew. Connecting to the wifi could have been claimed as “investigative journalism” and to hell with the consequences…… 🙂

Then again, the consequences might have lasted for the life of the current govt.
Since we obviously all enjoyed ourselves, and the liveblog was fun, it was probably a good call.