If the first step to rehabilitation is admitting one has a problem, the Greeks seem to be closer to debt overdose than coming clean.

Last week, three people were killed when a Greek bank was firebombed by protesters. The perpetrators of the triple murder were protesting a proposed austerity package, needed to secure funding from other indebted European nations. If that sounds bizarre to you, you aren’t alone. Greek citizens are protesting at the thought of receiving money from others (albeit that money isn’t free). Greece seems a little like a junkie, so hooked on its current unsustainable lifestyle that it isn’t even willing to accept help. If the first step to rehabilitation is admitting one has a problem, the Greeks seem to be closer to debt overdose than coming clean.

In a recent poll, 53% of Greeks would protest measures that would see them actually living within their means — almost half claimed they would refuse to accept those measures.

That Greece is in financial trouble shouldn’t really be a huge surprise, it is a nation completely unwilling or unable to live within its means (the retirement age in Greece is 50 for women and 55 for men — with a full pension). As Kenneth Rogoff and Carmen Reinhart described in This Time it’s Different, “Greece has been in default roughly one out of every two years since it first gained independence in the 19th century. Loss of credibility, if it comes, can bite hard and fast. Indeed, the historical evidence slams you over the head with the fact that, whereas government debt can drift upward inexorably for years, the end usually comes quite suddenly.”

Unlike other recent countries to default, like Argentina or Mexico or even Russia, the problem with Greece is its new found inter-connectiveness with other European nations, which themselves have not been bastions of fiscal responsibility. The chart below (which seems to have appeared in almost every financial newspaper over the past week) indicates just how closely entwined the Euro nations are. 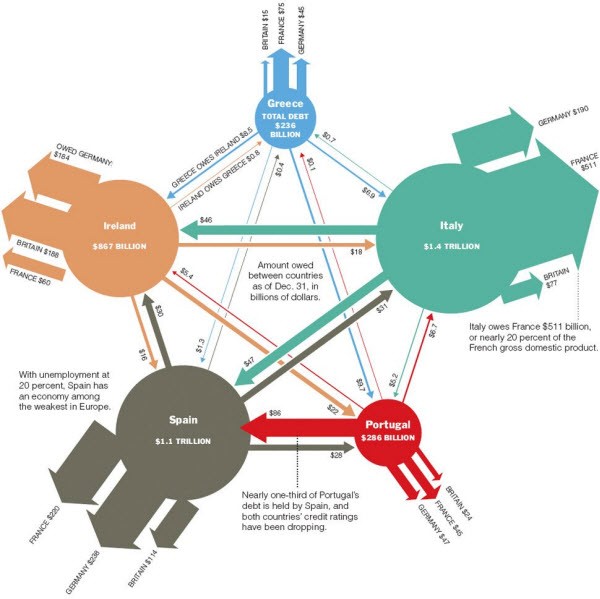 Other Euro nations, especially Germany, are not especially impressed at having to hand over loans to Greece, whose deficit of 13.6% of GDP is more than four times the EU limit. But they have been willing to support the bailout, largely for self-interest reasons. As Neil Irwin explained in Bloomberg, it the risk of contagion, not the direct fallout from a Grecian collapse that  is of most concern.

“It is called the contagion effect, economists’ metaphor for the rapid and hard-to-predict spread of a financial crisis, and it’s driven by the fragility of investors’ perceptions. Contagion is a function of vicious cycles in which confidence in a country’s ability to repay its debts falls.”

If investors lose piles of money on the debt of one country, they assume that owning the debts of other countries with similar finances might cause them to lose them even more. So they sell their investment in the second country, which means that country has to pay higher and higher interest rates to get any loans, which adds to its debt and creates a fiscal death spiral that can move on to the next country.

It is not altogether different to what happened in the financial sector in 2008, when the collapse of Lehman Brothers threatened to envelop other banks until world governments were forced to step in to avert the crisis. The contagion fears are more pressing in Europe given the widespread and interconnected levels of debt.

Will today’s Greek bailout prevent the crisis? Probably not. Even if it solves the Greek problem (which itself is highly unlikely), countries such as Spain and Portugal have similar debt problems — Spain has a lower debt level but a deficit equal to 11.2% of GDP and unemployment of 20%. Last week, the Spanish government sold €2.3 billion in bonds for 3.58% — 27% more than the rate it paid in March. The simple fact is institutions do not want to buy European debt. That is a particularly significant issue when, as Karen Maley noted today, Portugal, Italy, Ireland, Greece and Spain have $US130 billion in bonds maturing by June.

Greece isn’t the end of the European calamity, it’s merely the preview.

On April 20, this column warned of a state of delusional bliss enveloping world markets. While the Greek crisis has caused bourses across the world to start imposing a risk premium on assets, it appears not everyone is convinced.

Bloomberg reported last week that “a 1930s Bugatti has sold for $US30 million to become the world’s most expensive car — with dealers predicting more record as billionaires look for alternative to risky financial investments.”

Also, “a 1932 painting by Pablo Picasso sold at Christie’s International in New York for $US106.5 million on Tuesday, setting a record for any artwork at auction.”

Aside from perhaps current affairs shows producing stories about “investment clubs”, there are few better indicators of a pending burst than speculators paying record prices for luxury items such as  paintings or rare vehicles. These items have minimal intrinsic value and are priced based on how much excess cash wealthy people have to spend. Usually, during periods of extreme credit build-up (which will virtually always coincide with a boom or bubble), people have more money to spend on paintings or boats or planes.

Oh, and a few weeks ago my hairdresser started giving me share tips.

I bought a 12 ft dinghy last week with a 2hp Seagull outboard motor. It’s romantic, but the only problem is, if I want to get somewhere I have to leave an hour earlier.

But for those of us who can’t afford the Bugatti or the Picasso there seem to be few alternatives.