Our Prime Minister is now down in the opinion polls to the level of a mere mortal politician. But relax, polls didn't exactly predict the UK election, Libs play paupers and other political news of the day.

The evidence grows. Our Prime Minister is now down in the opinion polls to the level of a mere mortal politician. The only surprise is that it took him so long to get there. Two years coasting along with record high popularity ratings were mere anomalies. So too were the opinion poll forecasts of a second term Labor government having a substantially bigger majority than the first one.

It might be a rare thing for a new government not to win a second term — I think we have to go back 80 years to find one — but anything other than a fall in the second vote for a Prime Minister compared to the first one is almost in the same category. Howard, Hawke, Keating and Menzies all took a dip and Kevin Rudd does not look like joining Malcolm Fraser as the postwar anomaly.

This evidence of history will not, however, stop an edge of agitation entering into the Labor ranks. The Newspoll result of last week was frightening enough for any Caucus member with a marginal seat. This morning’s Nielsen figures will instil real fear.

The one person who must not panic now is the Prime Minister himself. Some recent decisions such as those increasing taxes on smokers and miners and the short-term backing away from an emissions trading scheme and an expansion of child-care centres presumably were made to clear the way for campaigning later in the year. Now is the time for a steady concentration on some positives.

So it will be back to the hospital wards for the picture opportunities with tomorrow’s Budget apparently going to contain more evidence of a Labor commitment to improve the health system. A change of the rhetoric about the super profits tax should be on the agenda, too. Forget about that superannuation benefit business. Just get the talk around to who would you rather pay for all the things the people need — profitable miners digging up what is the property of all taxpayer or the income taxpayers themselves.

Guidance from the opinion polls. Before we all get too concerned about what the Australian pollsters are telling us, it is worth remembering that they were hardly the most accurate guide to what was going to happen in the United Kingdom. The big difference was in the forecast of how the Liberal Democrats would cope with the actual vote of about 22% being well down on a prediction with a week to go that it would be at the 30% level.

The only reason I can see for the big difference is what I wrote in Crikey a week ago: “Humility tends to win votes rather than lose them and the Lib Dems in the UK may well have made a mistake by asserting that this election is a two-party one between them and the Conservatives.”

PS: We need your assistance, unlike our cashed-up opponents and their union mates we can’t keep this TV ad on prime time for long. You can do your bit to ensure it is seen by as many people as possible by: Making a donation — the money you pledge will help pay for this ad campaign; Sending this email to 5 friends

Being a bipartisan type of fellow and because it is the first Liberal television advertising effort of this campaign season: 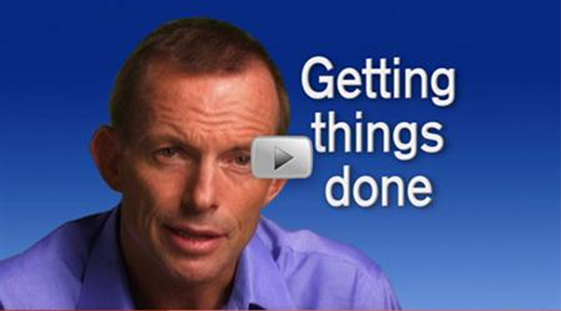 A soft spot for philosophy. I’ve had a soft spot for philosophy as a university subject since I realised many, many years ago that it was a good option at the University of Tasmania for a battling student. Our uni had no philosophy professor in my day due to the dismissal of one Sidney Sparkes Orr and the desperation to keep the subject going seemed to result in the small number of students doing remarkably well. Hence I noted with some sadness this report in London’s Sunday Observer: 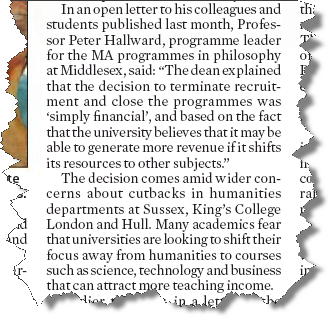 If such things have not yet happened in Australia, I fear they soon will.

Rudd is a wimp.

Whitlam, when faced with a hostile Senate blocking reform in 1974, called a double dissolution, won, and got legislation through at a joint sitting.

Howard, although an a*sehole of the first order, at least had the guts to turn the 1998 election into a referendum on the GST, and still scraped home and had a firm mandate to implement it.

Rudd should have gone to a DD on the ETS and other legislation, said “Let us govern” and forced Abbott to put up or shut up.

Instead he’s neutralising the major areas where he differs from the Coalition. Sorry, but he’ll never out-Abbott Abbott, and why not vote for the real thing?