The mere possibility of a return to swimming is good news for Ian Thorpe Inc, and his manager is happy to fan the flames -- and global media attention. For that, Crikey bestows a deserved Wankley.

THORPIE RETURNS! Back in the swim! Australia’s most successful Olympian was mounting a comeback, and the swimming world was abuzz … 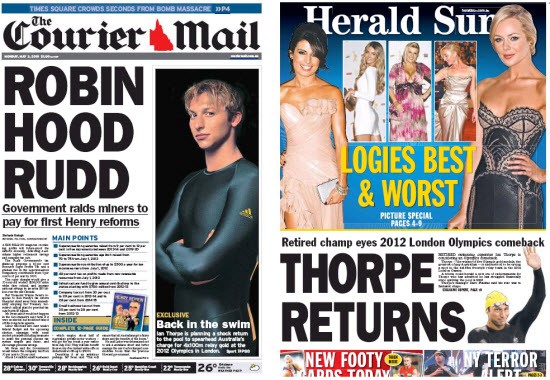 “Ian Thorpe is preparing to shelve his retirement in a bid to win relay gold at the 2012 London Olympics,” gossip girl Amy Harris declared on Monday, in a story picked up by News Limited titles around the country (Harris was a Confidential writer at The Courier Mail and is due to take up the same beat at The Daily Telegraph soon).

Harris’ story for News Limited went global and multilingual: Associated Press fed the story to world news sites including The Guardian and the Daily Mail, it appeared on the sites of ESPN, TSN and other sporting acronyms, Yahoo had it in Spanish, Daily India informed the subcontinent, while Swimming World Magazine was giddy with the prospect. In Australia the story quickly gathered momentum: swimming coach Tracey Menzies backed her former charge and former teammates welcomed his return — Geoff Huegill was particularly excited.

Except that Thorpe isn’t mounting a comeback. Probably. Long-time manager Dave Flaskas issued a statement hours after the scoop hit newsstands — the swimming superstar is apparently happily retired. As Harris was forced to report:

“At that conference I said, when asked about a return, that it was highly unlikely. I really do appreciate the well wishes regarding a possible return to competitive swimming. But as I have just said, it’s highly unlikely.”

It would be easy to beat up Harris over a story that wasn’t. But the real Wankley-worthy effort here seems to be Thorpie’s flack, who fuelled the original report with ignorance of what his own client was up to. Harris clearly felt she was on solid ground, and Flaskas did nothing to douse the speculation. He told her on Sunday:

“… he is in great shape, he’s lost a lot of weight and is still swimming … it would make a great story. It would be a hell of a race. I think the London Olympic organisers would love to see it.”

Even the denial failed to completely kill the story. Thorpie isn’t ruling anything out; a return is “highly unlikely” but Flaskas is maintaining the “never say never” line.

The mere possibility of a return is good for Thorpe Inc, and the manager is happy to fan the flames — and the global media attention. For that, Crikey bestows a deserved Wankley.

I’m looking forward to the next edition of Media Watch on Monday night. This is classic media ‘beat’s-up-story without checking facts’ material for the show.