May Day in Berlin: neo-Nazis, anti-fascists and techno

The Berlin May Day riots have become an institution -- a spectacle of violence attracting people from all over Germany to the suburb of Kreuzberg, writes Anna Saulwick from Berlin.

The Berlin May Day riots have become an institution — a spectacle of violence attracting people from all over Germany to the suburb of Kreuzberg. The international day of the worker is a focal point for activists who demonstrate opposition to capitalism, globalisation and each other. And while Kreuzberg was much more peaceful this year than last year (only one police officer suffered injury this time, compared with about 500 in 2009), there were countless outbursts of violence and vandalism.

Condemnation of violence and destruction is necessary, but is often reductive and might fail to see the riots as a cultural phenomenon with political undertones. The other side of the coin — the political phenomenon with violent undertones — could be seen earlier in the day, on the other side of town, as the far-right National Democratic Party (NPD) attempted to lead a march of radical right-wingers through the streets of Prenzlauer Berg.

In Germany, there is a constitutional ban on the use of symbols from the Nazi-era such as swastikas and Hitler’s salute, and contemporary political parties may not explicitly align themselves with the Nazi party. But when the NPD sent a call for support across Germany and beyond, asking supporters to gather in Berlin on  May 1, everybody knew that this would be the first major neo-Nazi demonstration in Berlin in six years.

A broad array of anti-fascist groups and ordinary citizens agreed to blockade the march. Some aimed simply to show their opposition to the ideology of the neo-Nazis, while others were dedicated to stopping the demonstration with a strategy of threatened violence. After the successful blockade of a neo-Nazi march in Dresden in February, these groups knew that the police would pull the plug on the demonstration if it were decided that the crowds could not be controlled. 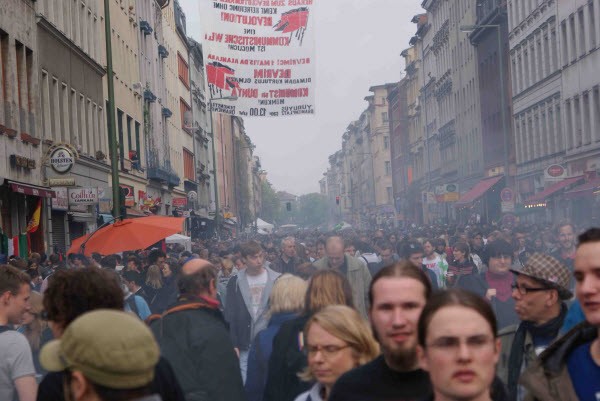 As the neo-Nazi demonstrators arrived at the Bornholmer Straße station, the police formed a human cage around them to prevent contact with anti-fascists. Meanwhile, all streets leading onto the march route were blocked by police, so groups of anti-fascist protesters went in through doors, across courtyards and over walls, waiting quietly in semi-darkness in the foyers of the apartment buildings standing along the march route, amassing until there were enough of them to make a run for it inside the barricades. It didn’t matter that there was almost nowhere to go inside the zone along which the neo-Nazis were due to march. The point was to make several breaks along the line, to keep the police busy and to demonstrate that clashes between neo-Nazis and anti-fascists were likely, if the march were allowed to proceed.

The anti-fascists gathered 10,000 supporters to the blockade. The neo-Nazis claimed that they would have more than 3000 supporters, but ended up starting their march with a little over 600. And at the barricades, 7000 police in armor were conscious of an implied threat: that if the neo-Nazis were allowed to march, a great many of the anti-fascist activists were willing to charge forward, past troops of armoured police, dogs and water-cannons, through pepper spray and into a bloody brawl.

The anti-fascist activists are not alone in thinking that there is no place for Nazis in modern Germany. Every other political party has repeatedly condemned the NPD’s anti-Semitic, racist and revisionist statements. Many Germans believe that the presence of the NPD in parliament represents a failure of the state to uphold the constitution, and are galled by the fact that the party qualifies for government campaign financing.

There was an attempt to ban the NPD as unconstitutional in 2001, with a case brought jointly by both houses of Parliament in Germany’s federal constitutional court. The attempt failed, and while many people believe the activities of the NPD to be unconstitutional, there is some doubt that the courts will ever ban the organisation.

The problem for the constitutional challenge arose when it was discovered that several key players in the NPD were in fact being paid by the German intelligence agency to report on the radical activities of the party. Even the NPD’s deputy chairman, who had penned an anti-Semitic tract that formed a central part of the case against the party, turned out to be a government employee. Since the intelligence agency was unwilling to reveal the identity of its agents or the extent of their involvement in the activities of the party, the court found it impossible to decide which activities were the result of genuine party decisions and which were influenced or instigated by individuals in the employ of the government. The case collapsed, and so the NPD continues to exist, with individual party representatives suffering prosecution for unconstitutional activities on a case-by-case basis.

The neo-Nazi demonstrators were just one city-block away from the main blockade when the police decided to turn them around in order to avoid a confrontation. After the announcement the anti-fascists celebrated a victory. But as I circled back to head home, past the clicking bicycles, the small birds in the bushes and the ambling seniors, I could still hear the shrill voices of the neo-Nazis, amplified and echoing through the streets as they headed back the way they had come.

That night in Kreuzberg, just around the corner from my apartment, the ritual violence and vandalism of militant anti-fascists and pissed-off youths from the suburbs was played out among techno parties and general revelry. The angry kids in black smashed windows and everybody else danced on broken glass.

Fall of the Berlin Wall: the 20th anniversary

RV – that’s such a surprising comment; my visits to Berlin since the 60s have always seemed to be waiting in the foyer for Brecht & |Sally Bowles, and the East was Weimar in aspic.