What the backbenchers will tell us

Australia's mining giants BHP-Billiton and Rio Tinto along with Brazil's Vale are not the only oligopolists in the international iron ore business. Plus, third parties shouldn't get too confident and other political snippets.

Some bravado from the miners. Australia’s mining giants BHP-Billiton and Rio Tinto along with Brazil’s Vale are not the only oligopolists in the international iron ore business. The governments of Australia and Brazil are equally as capable of playing the game of maximising profits as the companies so the intention of our Labor Government to raise its share of the available dollars is sure to be noted in Brasilia.

Some things about politicians are universal and seizing an opportunity for extra tax revenue is one of them. Hence the idle nature of the threats by the mining industry in Australia to take future developments somewhere else if the resources tax is finally imposed. It will not be long before the international mining taxation playing field is level again.

Luiz Inacio Lula da Silva is probably counting the extra reais at this very moment while he gives thanks to Kevin Rudd for showing the way.

The final indicator. A gloomy outlook for those with mortgages if the Crikey interest rate indicator at noon today had it right. It gives an 80% chance to the Reserve Bank board putting official rates up by 0.25 percentage points.

What the backbenchers will tell us. The demeanour of Labor backbenchers when Parliament resumes next week for the budget session should give us a guide as to how seriously we should take this morning’s Newspoll showing the Coalition in front for the first time in ages. The weeks spent back in electorates give MPs an opportunity to gauge how things are doing and I expect there to be a few signs of panic when the Caucus meets. How Kevin Rudd and his temper will handle the end of his opinion polling honeymoon will be a highlight.

The danger of a third party appearing too confident. We don’t have much experience in a Westminster parliamentary system of three parties being in contention rather than two but perhaps our own Tasmanian experience gives a warning about expecting the Liberal Democrats to really be the government makers in the United Kingdom. When the opinion polls in Tasmania showed the Greens well and truly in contention with just days to go before the actual voting there does appear to have been a reaction against the prospect of a hung parliament – greater the election before the last one but present this year as well.

In Canada also, where government often is gained with less than 40 per cent of the vote, there have been some surprise results where an unpopular incumbent has done better than the opinion polls suggested. One ingredient that political parties seen to be doing well seem to forget is that there regularly is an underdog effect. Humility tends to win votes rather than lose them and the Lib Dems in the UK may well have made a mistake by asserting that this election is a two party one between them and the Conservatives.

Gordon Brown, a man who has not had to act to appear as an underdog, may yet surprise us all.

Waiting for the grovelling apologies. I don’t want to put the kiss-of-death on the young sailor Jessica Watson but I hope there are a few people practising their mea culpas to be delivered the moment she sets foot again on Australian soil. 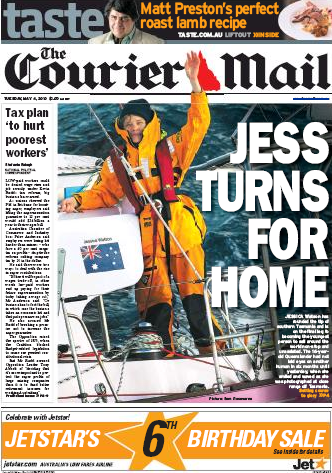 The 16 year old Queenslander has now rounded Tasmania and is on the final leg to becoming the youngest person to sail around the world non-stop and unassisted. And as she hopefully sails in to Sydney Harbour in a few days time to well earned praise as Australia’s latest heroine adventurer, just remember some of the comments like these that marked her departure back in September after she was run into by a careless bulk carrier: 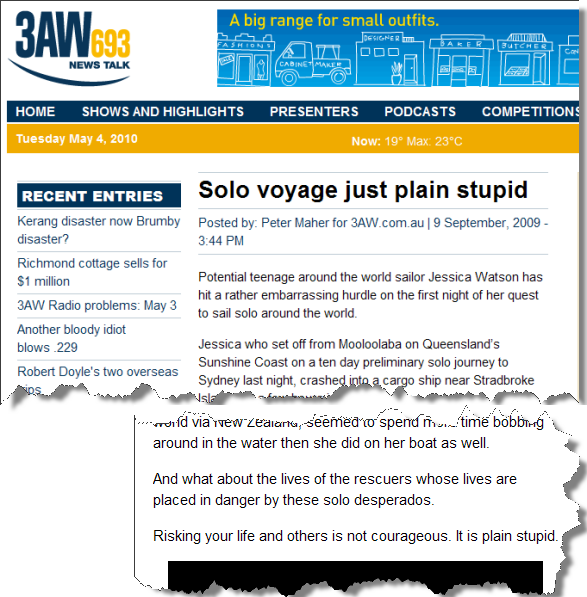 Will the talking heads at 3AW still describe her has “plain stupid”? And what about Queensland Deputy Premier Paul Lucas who, the Courier Mail reported as she set out, had this to say:

Jessica should abandon her attempt to become the youngest person to sail solo non-stop and unassisted around the world.

“I’ll be honest. On this evidence I don’t think she’s ready to do this,” Mr Lucas said.

“We all admire this young woman’s spirit, but sailing solo around the world is a demanding and dangerous venture. It’s not a task anyone young or old should undertake lightly.

“The decision about whether she undertakes this trip is one for Jessica and, ultimately, her parents.

“But I’ll say this much – just because our maritime safety experts may not have any powers to stop her, it doesn’t mean they don’t have a duty to talk to her parents about any concerns and how they could be addressed.”

“Our authorities have officially cautioned her and her parents and they’ve sat down with them to talk about Jessica’s plans.

“The fact is the ball is in their court,” Mr Lucas said.

“But it’s clear to me, and I think most Queenslanders, that no record is worth putting a young life at risk. I’m the first to admit, I’m not an expert in this area.”

An unknown Australian sporting hero. Inonothing is an appropriate name for the horse that at the weekend carried Paul Tapner to victory at what is perhaps the world’s most prestigious equestrian event — the three day Badminton horse trials. Australians normally only learn of equestrian contestants every four years when they compete at the Olympic Games but the 34 year old Tapner has yet to make the national team but he has ridden professionally in the UK since 1999 and his latest success should now change that. 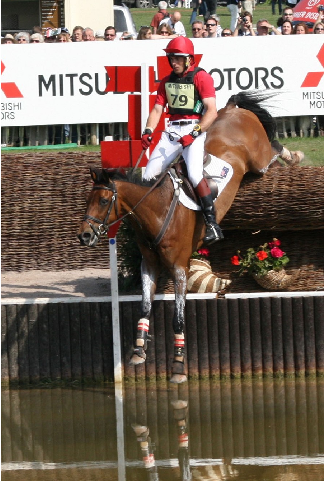 Inonothing jumping at an earlier event.

Hey Richard,
I’ll put my hand up as one of those who thought it was a pretty stupid idea.
Her surviving the trip does not make it any less silly, just lucky!!
I won’t apologize, and every time I see someone young taking an unnecessary risk, I will say “hey that’s probably not a good idea”.
Cheers
PS call me boring but really curing cancer etc is much more important, than sailing in a pink boat.

Richard i too still think it is a stupid idea. I would like to have her parents charged with child abuse. Nothing happened this time. Just blind coincedence that it didn’t. Also define ‘unassisted’.