Ken Henry's review of the taxation system will join countless others before it in the too hard basket. Plus, ignore the suggestion that tax changes will curb housing prices, blame the greens and other political tidbits.

What was it all for? Treasury Secretary Ken Henry might well ask himself what all the effort was for. His review of the taxation system will join countless others before it in the too hard basket. Three year election cycles mean it is only a very rare beast like John Howard who is prepared to tackle real changes to the way governments rise their money. And Kevin Rudd is clearly a very ordinary beast of a politician. No risk taking for him with a Howard like goods and services tax. The best this timid little man can do is pick out the safest option in the report to raise the money needed to get a budget moving back towards balance. Because mining companies don’t vote they are to be Labor’s tax reform token.

Up, up and away.  Just ignore all those suggestions from the Henry tax team that might curb run-away housing prices. Let’s just pretend we are concerned about housing while letting the joys of negative gearing continue and ignore figures like those out this morning from the Australian Bureau of Statistics showing that the boom times in real estate are back. Home owners are happier voters when they think their wealth is increasing and there are far more owners than renters. Let’s just get the election over before interest rates get much higher.

So for all of us interested in what’s happening to the house price in our state: 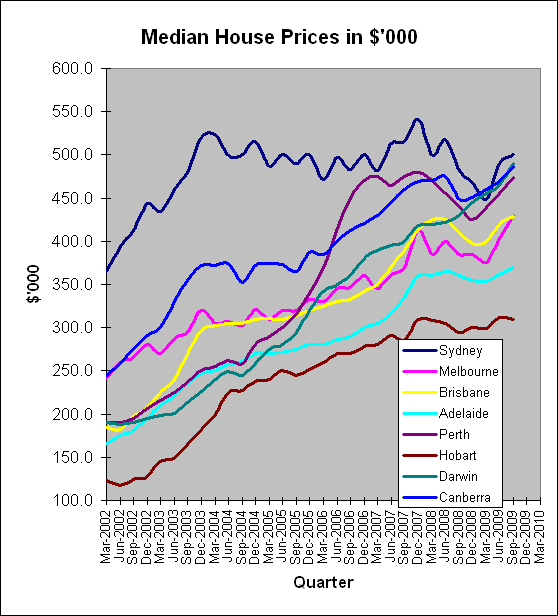 And things have got better (or should that be worse) since the ABS calculated those median price figures for the September quarter of last year. The pace of the rises has increased since then — up 4.8% in March from the December quarter to make it a lovely 20% for the year. The only small mercy for would-be first home buyers is that prices for project homes as measured by the Bureau have not gone up as quickly as those for established properties. 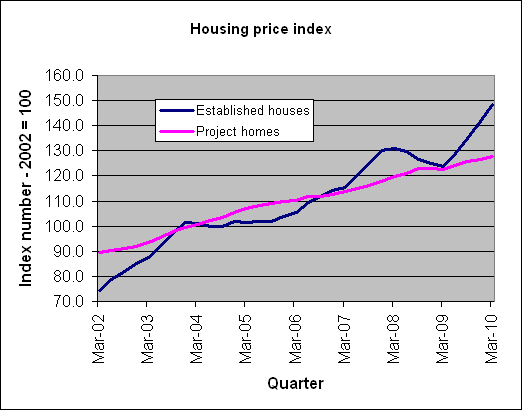 If in doubt blame the Greens. And you thought Australia had some right wing nutters as commentators. Have a listen to Rush Limbaugh commenting on the oil rig disaster off the Louisiana coast. It was those environmentalist whackos what did it. 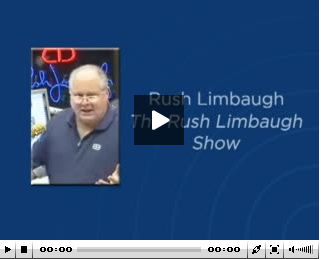