There is only one conclusion that can be drawn from the extraordinary proceedings this morning in Bruce Guthrie versus News Limited: somebody’s lying.

There is only one conclusion that can be drawn from the extraordinary proceedings this morning in Guthrie versus News Limited: somebody’s lying.

Before a packed gallery of journos in the Victorian Supreme Court (and about three members of the general public), Herald and Weekly Times boss Peter Blunden, under oath, flatly contradicted his former editor-in-chief Bruce Guthrie over a now-infamous front page that pilloried former police chief Christine Nixon for taking a junket to Los Angeles, claiming it “was a good front page” and that he “supported the story”.

It’s at odds with Guthrie’s version of events. Guthrie said Blunden had confronted him in his office before a lunch date to air objections to the story from Rupert Murdoch’s sister, and then-News chairwoman, Janet Calvert-Jones. But Blunden denied ever uttering the phrases attributed to him by Guthrie that “Janet’s not happy” and “Janet thinks we’ve been too hard on Christine”.

In a similar exchange two weeks later on a flight to Sydney, the News Limited hard man was equally blunt, denying all knowledge of the conversation. When asked by Will Houghton, SC, for News over whether they discussed the front page at any time on the trip, Blunden responded with a simple “nah”.

Blunden was in the box giving evidence in the $2.7 million unfair dismissal case of his former editor-in-chief that has captivated Melbourne media watchers all this week. It seems a large proportion have been on the receiving end of the bullish Blunden, whether in print or in person, so it was with a strange sense of relish that the usual suspects packed in to watch the News loyalist take on Guthrie, between who, he said, was a “profound professional gulf.”

In evidence that frequently lapsed into hearsay, prompting objections from Guthrie’s eagle Norman O’Bryan, Blunden trawled through a list of spats between himself and his former editor, many of which had been previously aired earlier in the week.

The court was told that 3AW broadcaster Neil Mitchell had complained to Blunden about the paper’s lack of scoops and that it had become “a reasonably common experience” to hear that other prominent Melburnians were noticing the problems with the paper under Guthrie.

Another fight over the sending of a photographer to England to snap photos of a Melbourne Storm exhibition match in February 2008 was recounted, with Blunden telling the court Guthrie was fearful of the intervention of the ABC’s Media Watch program if the paper looked like it was giving favourable coverage to the Storm as a News subsidiary. Blunden said Guthrie had recently accepted a free trip, to a pre-season AFL match in Dubai, making the Storm stoush “bizarre and hypocritical”.

“What if Media Watch does a story on us travelling with the Storm”, Guthrie reportedly said, to which Blunden replied: “Is Media Watch running the paper?”

In a stoush over the Beijing Olympics later in 2008, which Blunden was attending, Guthrie, responding to a blizzard of vitriolic emails over the hiring of new executive editor Peter Flaherty, wrote: “I’m trying to put out newspapers and it’s difficult when the MD is bagging you from another country.”

Blunden called the exchange “offensive and condescending” and that the hiring of Flaherty had introduced a new “layer of bureaucracy” into the paper.

Another apparent brawl — over an email sent by Blunden over Guthrie’s head to production journo Shane Bourke soon after Guthrie’s appointment in February 2007 — had set the ball rolling on tension between the two, Blunden said.

Much ado was made in court yesterday of the irony of Blunden failing to attend a management meeting to discuss promotions for a National Geographic DVD because he was soaring above Melbourne on an A380 Airbus — the same plane Nixon would later take to LA. That issue again arose this morning, with Blunden saying he had accused Guthrie twice, in front of 10 executives a week later, of being “not hungry to sell newspapers”. After the outburst, an eerie silence descended over the room.

Interestingly, Nixon and Blunden both sit on the board of the non-profit Alannah and Madeline Foundation and Calvert-Jones is its major community funder. On August 30, 2008 controversy had erupted between the warring duo over insufficient coverage allocated to the Foundation’s dinner attended by Princess Mary of Denmark and the prime minister, which had been organised by Blunden.

“It’s a good story, we should get behind it,” Blunden allegedly told Guthrie. But his former editor relegated the story to page 18.

After almost two hours of friendly questions from News’ counsel, Blunden had to endure a sustained 65 minute burst from O’Bryan before the lunch break. The first interesting revelation was that Blunden had only read The Australian‘s Media section report of the sacking for the first time two days ago, and he attacked reporter Verity Edwards for misquoting him extensively.

His main beef was that Guthrie wasn’t sacked over a “personality issue” but rather there was huge professional differences. However, when it came down to the crunch, Blunden admitted: “We weren’t mates … we didn’t get on.”

He admitted to complaining to Hartigan about Blunden on an almost weekly basis during 2008 but said this was never raised directly with Guthrie. Even after the decision was made in late October 2008, Blunden said the warring duo chatted with each other during the running of the Melbourne Cup on the first Tuesday in November.

“As the horses passed I turned to Bruce and said, ‘that’s the horse that will win it’,” Blunden said, of the only conversation they had all day at the Cup. And the man who admitted to owning shares in some horse races boasted his prediction was right.

In terms of the conciliatory email sent to Guthrie on the morning after the sacking, Blunden now says he regrets not taking more responsibility for it occurring, rather than blaming others.

Blunden’s credit was under sustained assault and O’Bryan indicated it would be a major issue in his final submission. For instance, Blunden agreed he told Bruce before the appointment: “Bruce, you were my idea.” But he denied saying it was “daylight second” in comparing him with the two other contenders, Phil Gardner and Simon Pristel.

There is still a strong case that Blunden is the most powerful media figure in Victoria, especially when, according to Guthrie, he was known for “breaching the commercial and editorial divide” from his perch one floor above the Herald Sun newsroom.

The Herald Sun, after mostly equivocal coverage on day one, has bared its teeth this morning producing the extraordinary headline: “The appointment of former editor Bruce Guthrie was a very bad decision” online, and another deck — “He Hurt the Business” — in the print edition. 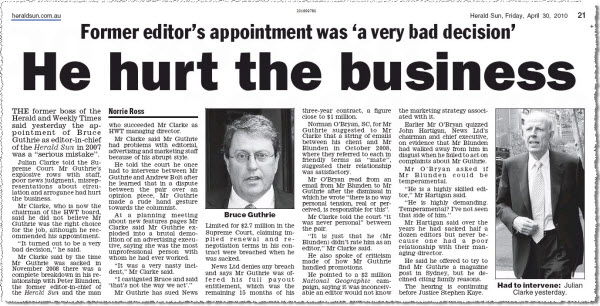 Seasoned observers say News’ grandstanding while the case is still continuing could raise the eyebrows of Justice Stephen Kaye, who is known for his conservative judicial outlook.

Meanwhile, there remains rampant speculation that Blunden will soon replace John Hartigan, who appeared yesterday in the witness box, as News Limited’s local chief executive. Blunden said this morning he had complained “every second week” to Hartigan over Guthrie during his time in the hotseat.

What was it but a “my is bigger than yours” pissing contest between two spoilt brats.

(Sorry, I swear I’m not going to do this every day.)

I just love seeing how the big boys play. The judge will get the final word. I’m looking forward to it.