ASIO's powers will be greatly expanded under the government's new anti-people smuggling laws. Courts have to send people to jail for no less than three years or five years if they are involved in people smuggling.

It’s not just Arizonian legislators who are so paranoid about migration that they feel the need to introduce  laws that substantially increase the powers of security agencies and extend criminal liability to the innocent. The Rudd government, supported by the Liberal Party, is just as illiberal on the issue if the Anti-People Smuggling Bill, currently before a Senate Committee that is due to report back to parliament on May 11, is any guide.

The Arizona law, signed into law by the State’s Republican governor Jan Brewer last weekend, forces individuals to carry migration documentation on them at all times, allows the police to determine a person’s migration status and provides for severe penalties for those who hire “illegal” migrants.  President Barak Obama describes the Arizona law as one that “threaten[s] to undermine basic notions of fairness”.

As does the proposed Australian anti-smuggling law in material respects.

The ALP/Liberal anti-people smuggling proposals draw heavily on the anti-terrorism laws that were passed in the aftermath of 9/11.  In particular, these new laws provide for an offence of “providing material support or resources” to a person who is engaged in people smuggling.

This is a replica of the offence with which Dr Mohammed Haneef — the Gold Coast doctor wrongly arrested at Brisbane airport in 2007 on suspicion of involvement in terrorism plots in the UK — was charged.

The flaw in what are termed “extended liability” offences is that they drag into the net people who are completely innocent, such as Dr Haneef.

What will happen with this proposed law is that when authorities are investigating a people smuggling exercise they will seek to charge family members and community supporters living in Australia who may have sent money, or made phone calls, or sent emails to asylum seekers who paid the people smugglers for the journey to Australia, on the basis that they may have given encouragement to people smugglers.  A Sri Lankan person in Australia who emails a family member who is an asylum seeker and gives them the names of persons who might be able to assist their passage to Australia may be caught under this proposed law.

Consider also a provision in the Bill that removes the current requirement in the law for the prosecution to show that a person obtained, or intended to obtain, a benefit from people smuggling activity.  As the conservative Law Council of Australia notes in its submission on the Bill, this will lead to a “wide range of people” being caught including, “family and community members and humanitarian organisations who seek to help friends, relatives and other vulnerable people escape, by whatever means are available, from a war or disaster zone or from some other form of persecution”.

ASIO will see its powers greatly expanded under the proposed law.  It will be given the power to gather intelligence on matters pertaining to “the protection of Australia’s territorial border integrity from serious threats”. The Australian Privacy Foundation, an NGO, describes the ASIO provisions as representing “one of the most significant expansions” of its powers in its history. Here’s some advice for refugee advocates and even lawyers who act for asylum seekers; get ready to be surveilled by your friendly ASIO agent.

The Rudd government is introducing mandatory jail terms for anyone found guilty of people smuggling where there is danger of death or serious harm, or where the people smuggling involves five people or more.  Courts have to send people to jail for no less than three years or five years in such cases.

This means a person who may have played a minor role in the offence, or who has no prior convictions, be very young or from a very poor background (such as an Indonesian fisherman) will face ruin if they are apprehended in Australian waters.

Greg Barns is a director of the Australian Lawyers Alliance

Porous borders would save millions in terms of people smuggling 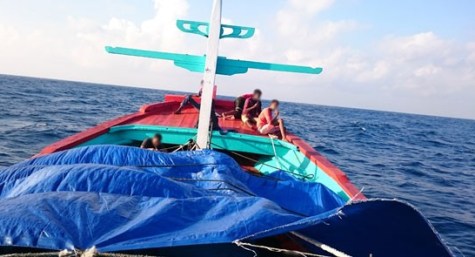 Yes. As suggested by the reflections on MI5 methods in Spycatcher, a really good national security agency achieves alot more with very well researched analysis behind their day long questionings, and a cup of tea for the target of their interrogation. No need for renditions, no need for repeal of habeas corpus.

And another thing, since when did good transparent process detract from national security? The open adversarial process for domestic law is extremely useful in synthesising the truth of a matter, but ASIO seem to approach things in secret as if that could ever shake out the best information for national security.

If that were really true we would have a star chamber legal system, not open courts. Is the truth of the matter really that ASIO is lazy?