Philip Davis goes into bat for his timber industry mates

Prominent Victorian upper house powerbroker Philip Davis has been accused of push polling to drum up public support for a controversial wood-fired power plant in the Eastern Victorian town of Orbost.

Victorian upper house Liberal powerbroker Philip Davis has been accused of push polling to drum up public support for a controversial wood-fired power plant in the eastern Victorian town of Orbost.

“Do you support the development of a woody biomass electricity generation plant in the Orbost district to provide electricity for the far east Gippsland region and contribute [sic] to reducing Victoria’s greenhouse emissions?”

A gung-ho letter accompanying the survey explains the “benefits of biomass electricity generation” and says the wood-burning project would make “a significant contribution to reducing Australia’s greenhouse emissions”. 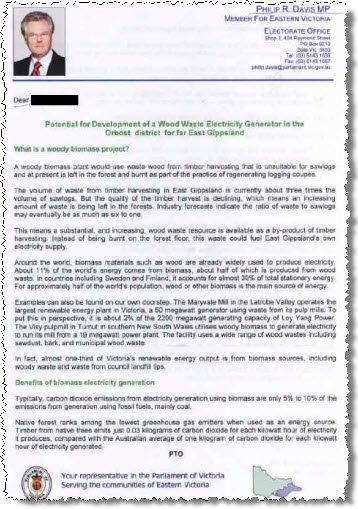 Biomass electricity generation involves scraping the forest floor to salvage foilage and feeding it into a furnace to generate power. Detractors accuse it of creating blanketing air pollution, while proponents maintain that the practice is an environmentally friendly way of using resources that would otherwise go to waste.

Davis’ survey was accompanied by an un-bylined April 14 article in the Snowy River Mail spruiking its distribution, that appears to have been prepared in close consultation with Davis’ office. It follows months of campaigning for the plant in the Mail‘s pages from prominent timber industry pointman Garry Squires.

Squires told Crikey that Davis had approached him with the idea of doing the survey and he had “made some comments on it”.

When pressed, he refused to reveal the details of the conversation, saying that they were “private discussions”. Squires said he had been accused by “greenies” of being league with South East Fibre Exports in the letters pages of the Mail, but that he had “no relationship” with the firm.

“I represent myself. Some people have trouble getting their head around the fact that I’m only concerned about the best outcome for the community.”

Squires, a former senior bureaucrat in the former Department of Sustainability and Environment, is now secretary of the Orbost Chamber of Commerce and Industry. He runs a timber industry consultancy “GRS consultancy services”. After leaving DSE, he became chief executive of East Gippsland Logging.

The buzz around biomass has reached fever pitch following the release in January of the Victorian Timber Industry Strategy that gave tacit backing for biomass projects, alongside its inclusion in the federal government’s 20% renewable energy target. A neighbouring 5.5 megawatt plant across the NSW border in Eden, proposed by the Japanese-owned South East Fibre Exports, is currently the subject of a bitter public consultation process.

There is speculation that if the plant becomes a reality, the firm may look to spread its tentacles over the border into Victoria.

Former Monash University researcher Aron Gingis, who has penned articles on pollution from wood-fired plants for the international journal Science, told Crikey that plants burning “hundreds of thousands of tonnes of wood” on both sides of the border would be a “environmental disaster”.

“The plant would harvest native forests and would cause major air pollution across the region. The smoke wouldn’t be able to cross the mountains so you’d have bowl effect that would lead to respiratory illnesses.”

Davis’ upper house colleague, Greens MP Greg Barber, said the idea of a wood-fired power plant was an “uneconomic scam” and that Davis was purposefully trying to bend public opinion.

“The whole project would rely on state government subsidies that should be going to bushfire victims.”

Crikey contacted Philip Davis for comment on this story but we didn’t hear back before deadline.

Exactly how is burning forest ‘renewable’ in order to be part of the 20% renewable energy target?

@DR STRANGELOVE at 3:25 pm
It is renewable because the forest regrows it and drops fresh litter all the time, so it becomes part of a closed loop with the atmosphere–no net CO2 emitted over time. The same reason why our giant bushfires are not counted in CO2 emissions; the bush very quickly regrows (though arguments can be made when the fires becomes so big that mature trees are killed because these are thought to capture/store CO2 than young trees).
Speaking of which, I suppose one could also try to make the case that harvesting the forest litter on a big scale would provide a “free lunch” (and feasibly prevent lethal fires like Marysville etc) since the litter will burn one day anyway, why not capture the heat it releases which in turn displaces coal. The problem with that argument and in fact with the East Gippsland proposal, and any such proposal anywhere in the world using wood burning is that they have no intention of just using litter (which doesn’t mean they may not say that now to get the thing up and running). It is absurdly expensive in labour to collect low-density litter as the exclusive fuel. No they would be planning to destroy more forest for their dirty plants.
So yes, stupid.

Stupid in more ways than one. Removing so called “litter” removes vital habitat for any number of native species such as snakes and lizards, small marsupials, birds etc.

Not only that, removing biomass from the forest in a large mass removes organic matter needed to grow more trees. A natural forest is self renewing in this respect – trees grow, trees die & fall, the woody material is broken down by bacteria & fungi (principally fungi) to grow the next trees. In most cases, there is sufficient resilience in the system to allow removal of some biomass as timber, but take the lot in one fell swoop & the soil is stuffed – slowly but surely.

The real puzzle is why our so-called professional foresters do not understand this simple fact of (tree) life, and speak up about it.

Diverting from the energy proposal for the moment, consider the plantation situation, where woody material is removed in a mass, the rest burned and another crop planted. On each “rotation” (another word the meaning of which has been perverted by the forest industry from its agricultural meaning of growing a succession of different crops), a large amount of biomass is removed. My guess is that after two, or maybe three “rotations” trees will not grow in that soil. A sustainable industry? I think not.

In the prehistory of the woodchip industry, it was claimed that only thew left overs & by products were being chipped. “Whole logs? Perish the thought”